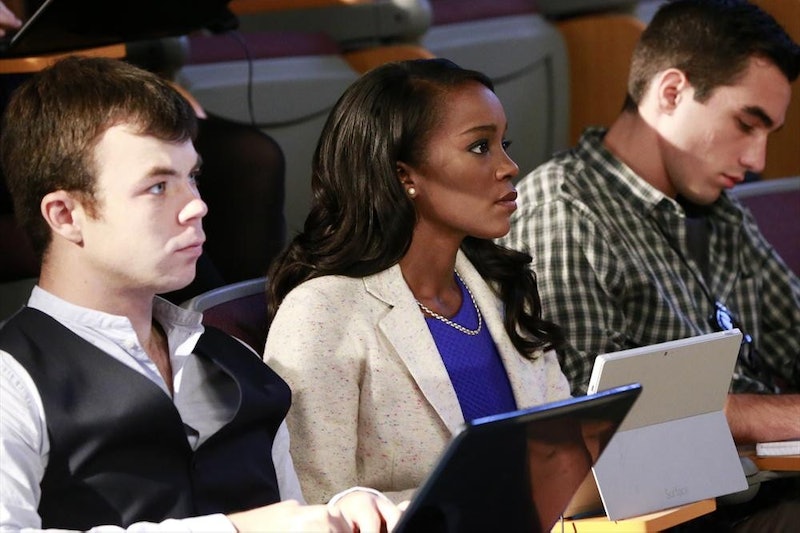 After last week's episode of How to Get Away With Murder, it appears that the Lady Justice Trophy will be passed around a few times as the season progresses. So who ends up with it? My theory is that Michaela Pratt has the HTGAWM murder weapon, er, trophy at the time of Sam Keating's murder. That's why she's so upset. (She may even be the killer, but I'm trying to stay focused here and, unless she did it in self defense, I highly doubt she has it in her, so I take that back.) However, in the game of "pass the Trophy" sometimes you win, and eventually someone dies.

The Lady Justice trophy is an talisman used in Professor Keating's class to get out of an exam. (Man, would I hate to be one of the less successful students in Annalise Keating's class — they're the ones who need that exemption and will never get it. Doesn't seem very just, does it?) The trophy was awarded first to Connor Walsh for his skills in sexpionage, then, this past Thursday, he lost the trophy to Wes Gibbons. Again, this was done in the lecture hall where I'm sure nobody else cares. I have a hunch that after Wes inadvertently caused his neighbor Goth Rebecca to confess to a murder she did not commit, that trophy will not stay in his possession for long. Now the question is, who'll end up with the trophy by season's end? My gut is pointing to Michaela Pratt and here's why:

She's the most driven

It's all too apparent that Annalise Keating is the first teacher not to be wowed to death by Michaela Pratt, so her lateness and occasional minor screw ups are a major problem in Annalise's eyes. Unlike Wes, she doesn't have boyish charm to get her by. I'm not picking on Michaela. Connor had his day, Laurel screws up just as much, and I'm sure Asher isn't even in the running (jinxing myself there a bit) for the trophy. But Connor doesn't care about anyone's opinion nearly as much and Laurel is sidling up to Frank whether she is ready to admit it or not.

We learned, through pillow talk with Ms. Pratt's fiancé, that she's as achievement-based in her social life as she is in academia. She wants the nanny, the cook, the flashy ring and the designer wedding dress. All excellent aspirations, I might add. She told Aidan that she doesn't want a trophy husband, which I think was intentional wording on the writers' behalf. She said she wanted them to rule the world together. Then, upon learning that he may have some steamy history with Connor, she grilled him about the investment she was making by marrying him. If he's not a trophy to her, what is he?

However, Keating's trophy is not a person. Now that Michaela has seen that the Lady Justice statue is within her grasp after all, I don't think she'll stop at anything to obtain it.

She protests too much

Michaela is the one to chastise Wes for taking removing the trophy from the scene of the crime in the first place. She's the most vocal about wanting to leave Sam's body in his wife's office. Always concerned with appearances, she refuses to join the group in the cover up at first so that she can feign innocence in court. She's quick to push the blame on Goth Rebecca.

Last week, we saw the Murdersitter's Club standing over the body, still gushing blood, clearly before they all went to the woods and tossed that infamous coin. In Keating's office, Michaela was in shock — practically cowering in a corner and still wearing her wedding ring. It takes a little bit of time to pull herself together and be a star. She has the highest aspirations and the most to lose by being convicted or even accused of murder. This is affecting her more than the others and I don't think a weak stomach has anything to do with it. She has her own guilt, and I think the murder weapon is the reason. Who slung the trophy at Sam Keating, however, remains to be seen.