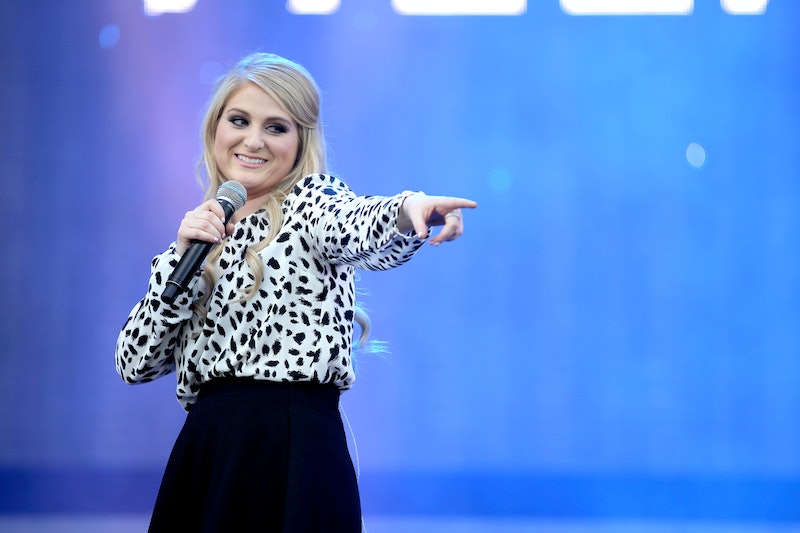 Meghan Trainor is a rock star. OK, technically she's a pop star thanks to her hit single "All About That Bass" which was certifiably the song of the summer, but the fact that she made a kick ass and inspirational song as well as remaining incredibly down to Earth throughout her entire meteoric rise to fame, makes her a total rock star at life (you know what I mean) in my eyes. So, does this beyond talented blonde bombshell have a boyfriend? Not likely. It seems that Meghan Trainor is single.

While on a promotional tour in Australia this summer, the 20-year-old Nantucket-born singer revealed that the relationship she'd been in since before she became a star took a bad turn. In a radio interview with 2DayFM’s The Bump Show, Trainor got real with host Angus O'Loughlin about how her ex acted like kind of a d-bag once she hit the road to get the word out about her music:

Apparently he blamed it all on the fact she didn't text him enough. Um, rude. Maybe she didn't text you back because she was too distracted by her songs climbing up the charts to be bothered by all that. I mean, have you been able to stop singing "Dear Future Husband" since it came out? She's crazy good. I guess an added benefit of going through a break-up when you're the radio's current darling is that plenty of "Megatrons" (aka her fans) have kept her mind off the split.

For right now, Trainor appears to be single, but if her songs so far are any hint of her longevity in the music business, she'll definitely be around long enough for us to see her get a new boytoy.