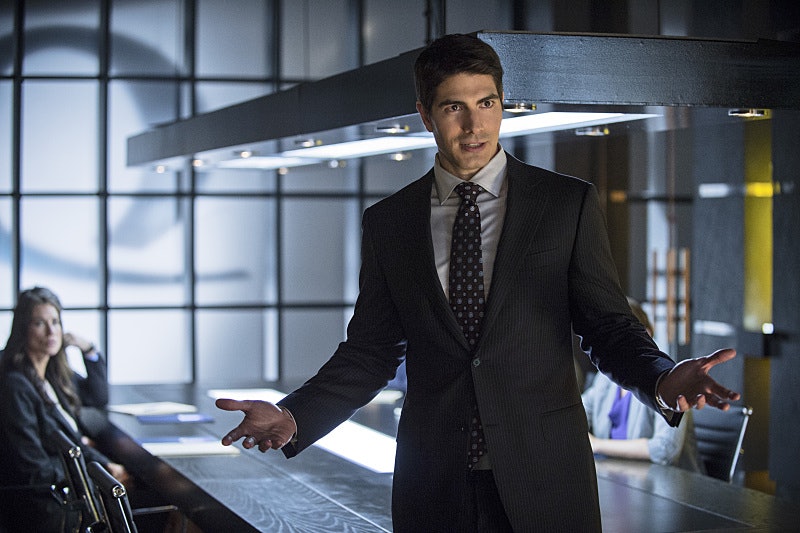 Anyone who watched the premiere last week is most likely still reeling from the after effects of Oliver and Felicity’s first date on Arrow . What we thought — nay, hoped — would be the start of a full-fledged relationship turned out to be the beginning of the end as Oliver once again decided to distance himself from having a life. (At least we got that kiss scene though!) And a second date is looking even more unlikely now that Ray Palmer is officially interested in Felicity. So much so, in fact, that he's been sending her flowers, texting, and buying not just the store that she works for, but the entire chain. So, in other words, typical first date behavior, mostly. (If I had a nickel for every time a guy has bought a $1.2 billion investment just to see me… I'd have zero nickels.)

Nevertheless, it's clear that Palmer is interested in Miss Smoak and as much as I'm a hardcore Olicity fan, I can't deny that there's definitely something there. When Felicity runs over to his office (aka Oliver's old office) to yell at him for his inability to leave her alone, he senses that there's something else bothering her, and offers some words of comfort. It was very perceptive of him to take more away from her cold emotions than just what was on the surface. It proves that he's a good guy. A decent guy. And dammit, I found myself rooting for him. Maybe they wouldn't make such a bad match after all. (Relax, Olicity 'shippers, the thought only lasted for a moment, but still.)

Clearly this guy isn't going anywhere anytime soon, and it's totally OK if you don't want him to, especially given how Oliver was acting extremely distant and cold in light of Sara's death. I understand that it's just how he's coping, but with Oliver pulling away and Ray drawing her in, I fear the future of Olicity is looking very dark indeed. And while we may not need to come up with a 'shipping name for them just yet (Raylicity anyone?), it may just be only a matter of time.