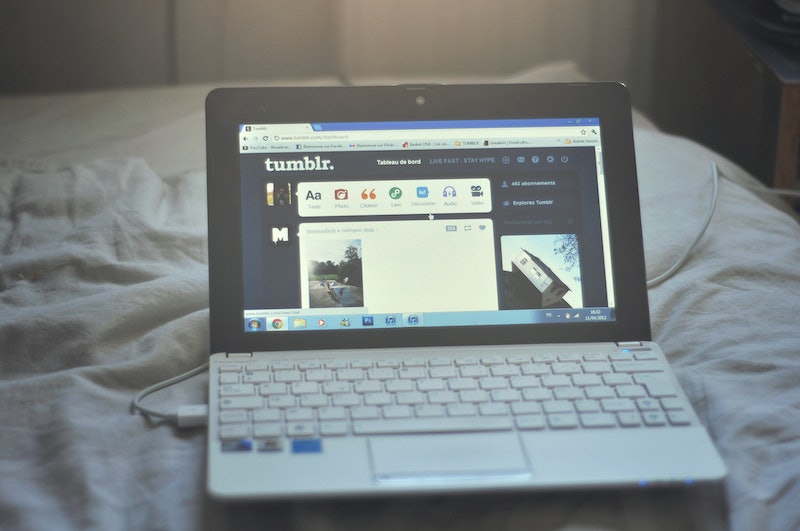 I used to be a person. That person had hopes, ambitions, a semi-ordinary sleep schedule, and no idea of the danger that is the vortex of Tumblr, the six-year-old personal blogging platform site that was acquired by Yahoo last year for a cool $1.1 billion. My ignorance is explained by the fact that I was late on the scene to most social media: I wasn't allowed to have Facebook until my junior year of high school. I had a Twitter account, but didn't even bother to use it until last year (and even then, it was mostly to shamelessly tweet for free concert tickets). So it was pretty unlikely, inept that I was, that I was going to make an account on Tumblr unprompted.

Enter fan fiction, the catalyst for everything I lose sleep over on the internet. I was writing a story for a particular fandom that "took off" (I use air quotes because this is still fan fiction, folks), and a reviewer innocently commented that I must be excited about the fan art the story had generated on Tumblr (and yes, I was EXTREMELY excited). Anyone who has ever had a Tumblr knows the story of what happened next: once I logged onto the site for the first time to check it out, I was marked. Claimed. Assimilated.

Literally anything a fangirl could ever hope for is on that site: fan fiction, gifs, fan art, witty text posts, and the most bizarre themed blogs you could imagine, from Confused Cats Against Feminism to awesome inappropriately shaped running routes to Straight White Boys Texting. Why would a person ever try to leave?

Partially because you can't. Yahoo may have acquired Tumblr, but Tumblr will acquire your soul. Your descent into Tumblr will take you by surprise, but it is destined to happen...and here are the stages every new user experiences when it all begins:

What The Hell Is This Place?

I mean, I've heard of Tumblr. I'm hip and stuff. But what is this site actually for?

Why Are ALL THE USERNAMES EVER IN THE WORLD Taken?

Seriously, I put in my great uncle thrice removed's name and even THAT'S unavailable? Guess my new username is "aorgafdogndfklgm".

It won't let me do anything until I've followed five people. And then five more people. Oh, god. WHO ARE THESE PEOPLE?!

What Is The Social Implication Of "Reblog" and "Like"?

I am paralyzed with fear and confusion. Growing up with social media, we just have an innate sense of the social schema of "liking" things on Facebook and retweeting on Twitter, but I lack any kind of schema for this new society. Are people going to get mad if I reblog all their stuff? What's the point of "liking" it anyway if it doesn't go on your blog?!

OH MY GOSH, There's A Whole Secret Fandom For [Insert Your Obsession Here]

Searching through the tags of your favorite fandom for the first time is an experience I can only compare to the joy you see on babies' faces the first time they try the frosting on cake. Utter bliss.

HAHA I'm Going To Comment On Everything I Reblog

I HAVE THINGS TO SAY and obviously all these strangers on the internet want to hear about them.

This seems to be a rite of passage for all new Tumblr users. Apparently it's "uncool" to comment on everything you reblog, and if you're being really savvy and subtle, you post all your wry, ironic comments in the tag section. Cool, Tumblr. Lesson learned.

I Failed Tumblr And Am In A Whirlpool Of Newbie Shame

After all, I'm super clever/creative. Everyone on Tumblr is going to appreciate my genius and this post is going to get 100,000 notes, because I spent ALL DAY getting the wording JUST RIGHT.

Return back to the pit of newbie shame.

Oh, wow, if I just scroll down on my dash the posts just keep coming. Forever.

Is That The Sunrise?

It's not like I had any major life goals or loved ones to stay in touch with.

All Other Forms Of Social Media Are Inferior To This

Seriously, will I ever login to Facebook again? How long does it take for my Facebook to delete itself from abandonment the way my Neopets threatened to do all through my youth?

When Is The Last Time I Spoke To A Real Human Being?

I Need To Change My Blog Theme NOW.

It is suddenly very important that my Tumblr makes me look like a person who is ten times cooler and more chill than the neurotic internet failure that I actually am in real life.

Wait, I Just Found Someone I Know On Here

I THOUGHT I WAS SAFE HERE.

...And We're Going To Pretend It Never Happened

I Have Lost All Sense Of Priorities

"Outside"? I'm sorry, I don't think I've ever heard the word before. Could you give me its country of origin?

I Am One With The Internet. Goodbye, World.

Real life was nice while it lasted. (Tumblr is better.)