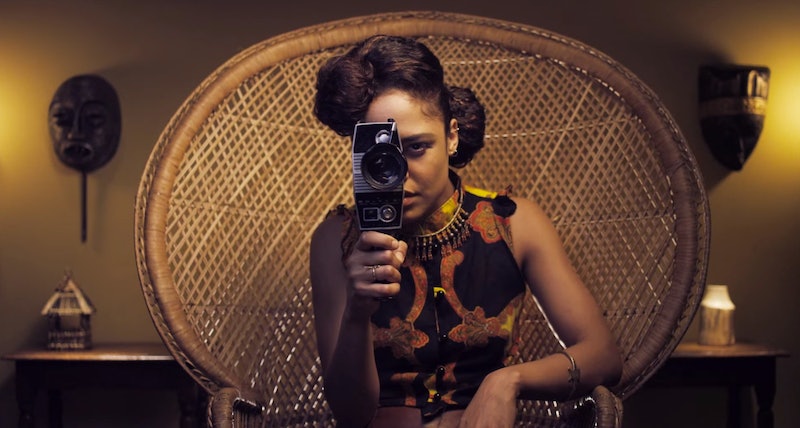 Ah, Dear White People. It's the movie I didn't know I was waiting for until the trailer hit the Internet. A racial satire focusing around the unique perspectives of African-American Ivy League students on a predominantly-white campus, Dear White People looks like it's going to be a humorous summary of my general college experience in a nutshell. The film will be released on Friday, October 17, but that might not be the last we see of this concept or even these characters. In an interview with The Hollywood Reporter, director Justin Simien said he's planning a Dear White People TV series, presumably pending a script and a network to pick it up. Without having even seen the film, I can already say that if he were to start a Kickstarter campaign for funding then I would throw all the money I have in his direction just to see this happen.

"I really believe that there is life in these characters, and I think that perhaps in another medium it would be very exciting to continue their stories and to follow their journeys," said Simien. "I think all the things that the world of Dear White People wanted to say lends itself to television, and I’m very excited about figuring that out."

You have to admit that the timing is perfect for Simien's satirical comedy to find a place on television that isn't on a niche network like OWN or BET. After all, just this Fall 2014-2015 TV season, ABC debuted their own racially-charged comedy black-ish about a black family in a predominantly white neighborhood. Not only is black-ish doing well in the ratings and with the critics, but it's also been picked up by ABC for a full season order. In addition, we have Jane the Virgin bringing telenovelas back to mainstream networks like the CW. If ever there was a time for a movie like Dear White People to make it onto basic cable as a TV series, now is it.

But even if the timing wasn't great as far as networks and diverse television is concerned, Dear White People is the kind of thing that we need to see on television. Between things like The Whiteness Project proving that America's ongoing quest for racial tolerance and understanding is far from over and events like the Ferguson shooting and protests taking place, diverse representation and tackling hot button political issues in a satirical and accessible way is something that more television shows should be doing. No one likes to be preached at or to have their views challenged, but everyone likes to laugh and that's what Dear White People does. It highlights real issues in a funny and thoughtful way that never crosses the line into mocking or into soapbox-level ranting.

On top of all of that, Simien is correct when he says that Dear White People lends itself very well to a television show format. Samantha White's controversial radio show, "Dear White People", the students that agree with her, the students that disagree with her, the students that agree with her but disagree with her methods — all of that can generate lots of plot in and of itself. Combine that with the unique perspective that each of the main characters brings to the narrative, from Lionel Higgens' undercover reporting on "black culture" to Coco Connors who is described as "aggressively assimilated", and there are already multiple storylines to follow that would benefit from being deepened in a long-running television show.

What's more, like black-ish, Dear White People wouldn't be a show that is solely accessible to the African-American audience, just like every show that stars an all-white cast is not solely accessible to Caucasian Americans. Every minority, every immigrant, everyone who has ever felt different from the predominant group around them, will be able to find a character or a plot to relate to in a Dear White People television show. It examines racism in society and the invisibility of white privilege rather than being a laundry list of every crime you're committing just by the sheer fact of being white. That lesson is a universal lesson that we would all benefit from being better educated about. Bring Dear White People to television, please and thanks.