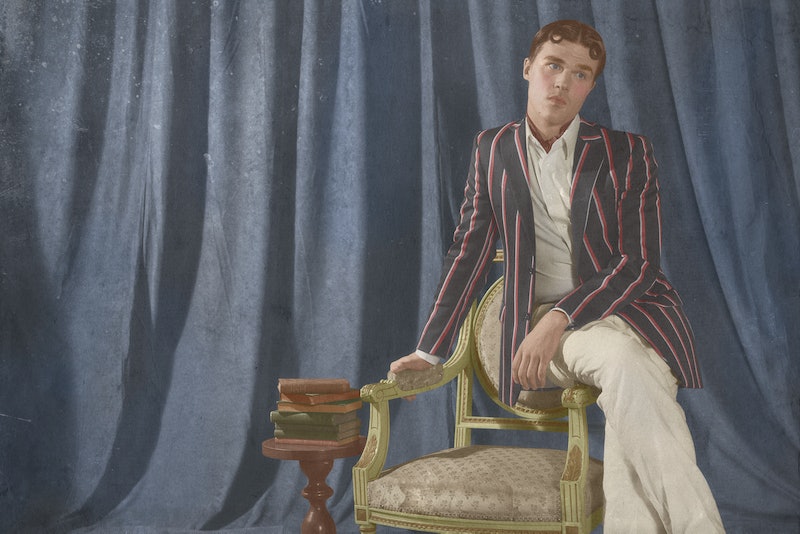 Since American Horror Story: Freak Show premiered last week, people have been going absolutely nuts over how supposedly "scary" Twisty the Clown is, but personally, I just don't see it. In fact, I laughed during Wednesday night's new episode, "Massacres and Matinees," when we got our first peek behind the killer clown's mask. Nope, Twisty just doesn't phase me at all. Personally, I'm much more scared of Dandy Mott (played by Finn Wittrock), the filthy-rich twentysomething who acts more like a petulant, five-year-old brat than an actual adult. Oh, and he appears to be harboring some homicidal tendencies, too. Yeah, in my opinion, Dandy is Freak Show's scariest character — not Twisty.

American Horror Story co-creator Ryan Murphy told BuzzFeed's Jarrett Wieselman in September that with Twisty, the writers set out "to create the most terrifying clown of all time" — but I think that they fell short. To me, Twisty just looks like a character you'd see wielding a phony chainsaw outside of the entrance to your local haunted house. I mean, sure, the guy doesn't exactly give me a warm, fuzzy feeling inside, but his mask strikes me as goofy, not scary. Plus, his hair totally reminds me of Cynthia, Angelica Pickles' doll from Rugrats.

Yes, we have watched Twisty brutally murder people — and that's definitely unsettling — but as a longtime lover of horror movies, for better or for worse, I'm kind of desensitized to a lot of the over-the-top violence in his scenes. Also, I think it's a huge missed opportunity that Twisty doesn't speak or show much emotion. As far as I'm concerned, Pennywise from Stephen King's It still holds the title for most terrifying clown of all time.

To the contrary, there are a number of things about Dandy that send chills down my spine. These are the reasons why Dandy Mott is actually way scarier than Twisty the Clown:

His Name is Dandy

You guys, we need to talk about Dandy's hair. It's parted straight down the middle a la Alfalfa from The Little Rascals and THOSE CURLS ARE SO MENACING! They look like devil horns.

His... Strange Relationship With His Mother

No doubt about it, there's something FISHY going on between Dandy and his mother, Gloria (played by the always amazing Frances Conroy). We don't know for certain what it is yet, but I, for one, smell incest. Just look at this woman's face! If that face doesn't scream, "Yes, I'm making whoopie with my son several times a day, isn't life grand?" I don't know what does.

Dandy has a tiny little glass baby bottle — complete with rubber nipple — that he uses to drink cognac. This is not a normal thing. This is horrifying.

His Love of Puppets

If Lady Elaine from Mister Rogers' Neighborhood taught me anything while growing up, it's that puppets are fucking scary. Anyone who loves puppets is simply not to be trusted. Side note: That puppet that's supposed to be Anna from The King and I looks an awful lot like Dandy's mom, right? I can't even begin to imagine the kinky puppet sex that goes on in Dandy's play room.

His Fondness for Escargot

Those are snails, and that's disgusting.

His Face In General

Dandy makes a lot of scary faces, but this one that says, "I have enough money to get away with anything...and I still wet the bed at night!" is especially bone-chilling.

His Penchant For Torturing & Killing Cats

The Motts' maid (played by the legendary Patti LaBelle for some reason) tells Gloria that she's found animal body parts, pieces of fur and teeth, behind the shed... again. Oh, and she says that the neighbor's cat has gone missing. Gloria is insistent that Dandy had nothing to do with the pet's disappearance, but you and I both know that demented people sometimes get their jollies by torturing and killing innocent animals! Or at least, that's what television and movies have led me to believe for years. Granted, we haven't actually seen Dandy hurt anyone or anything yet (though I'm willing to bet that that's about to change), and Twisty's chopping people up left and right, but sometimes, what you don't see can actually be more frightening than what you do see.

His "Debacle With the Cushing Girl"

During an argument, Gloria expresses concern over Dandy's alcohol use, and mentions, rather eerily, that she's still having "nightmares about the debacle with the Cushing girl." Dandy responds, "I told you a million-trillion times, I did not touch her!" Gloria then indicates that it was her friendly relationship with the town's police chief that helped Dandy avoid prosecution for whatever it is that he did. My gut tells me that a spoiled, entitled little monster like Dandy doesn't understand the meaning of the word "no" — and there isn't much in the world that's scarier than that!