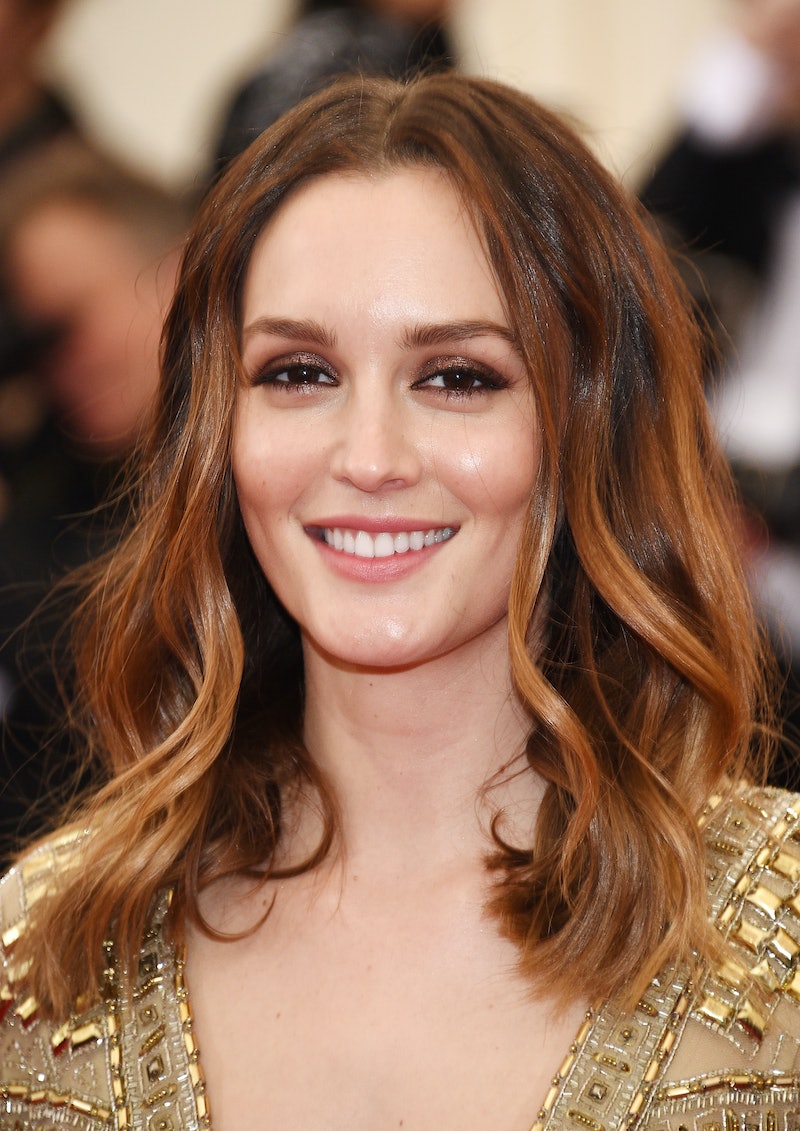 Forget "Out of the Woods," because this notoriously private Gossip Girl star wrote a break-up song. OK, fine, maybe you don't have to forget "Out of the Woods," but you should absolutely listen to Leighton Meester's new song "Heartstrings," again. Back in September, Meester announced she'd be releasing her new LP Heartstrings and premiered the title track off the album. And at an Apple Store performance in NYC on Oct. 14, the actress, who recently married Adam Brody, revealed some of the inspiration behind her new album. Apparently, the 28-year-old actress wrote the song as a proverbial "F-you" to a "joker" ex who broke her heart at 25. Who could this guy stupid enough to cross Blair Waldorf be? Well, Meester's "Heartstrings" might be about Sebastian Stan, if we look back the star's dating history.

The actress told fans at the Apple Store event on Tuesday night:

It used to be about some stupid breakup that I had when I was 25 or earlier. But it was stupid, and I was like, 'I have to write a song about this!' Now, it really does have more meaning. At the time it was like,' Screw you, I don't care about you anymore, and it's not going to happen! Joker.'

#Burn. Could she possibly be talking about Stan? It's difficult to get a clear picture of Meester's personal life before marrying Adam Brody, considering how successful the star has been at keeping her romantic life private over the years. I mean, she married the O.C. star right under our noses in a super-secret ceremony when some people probably didn't even know they were dating. That's a feat by Hollywood standards. But a few interviews with Meester from back in 2010 reveal that its definitely possible that "Hearstrings" is about her former Gossip Girl costar.

According to reports, Meester and Stan began dating in 2008 and broke up in 2010 when Meester was 24. The pair met — and made-out — on the Gossip Girl set and according to Meester at the time, they split amicably.

She Got Pretty Dark After Their Break-Up

Meester explained at an Apple Store that the idea behind "Heartstrings" is: "...about just sort of tying your heartstrings off — not allowing yourself to be vulnerable." Basically, about going to a dark place after a break-up, which reflects a bit of what Meester was going through when she appeared on Seventeen magazine's cover in Feb. 2011. The actress told the magazine:

I think you have to know how you feel when you're sad and it's healthy to mourn if a relationship ends. You should go through a period where you experience that feeling instead of fighting against it all the time and saying 'No I want to be happy' because that's not healthy. As much as I don't want sad or bad things to happen to me, it's given me a lot of material for my work, so it's good.

"It's given me a lot of material for my work," definitely means it served as inspiration for Meester's first album, right?

Maybe Meester calling her unnamed ex a "joker" was a more telling jab than perceived because Stan is apparently a huge fan of Heath Ledger's performance as The Joker in The Dark Knight. Back in March 2014, when Stan was doing press for Captain America: The Winter Soldier, the actor called Ledger "an inspiration" and said that he'd always admired the late actor's performance. Sure, it's possible that Meester wasn't making a pointed reference with her comment, but this is just too much a coincidence to not be related somehow.