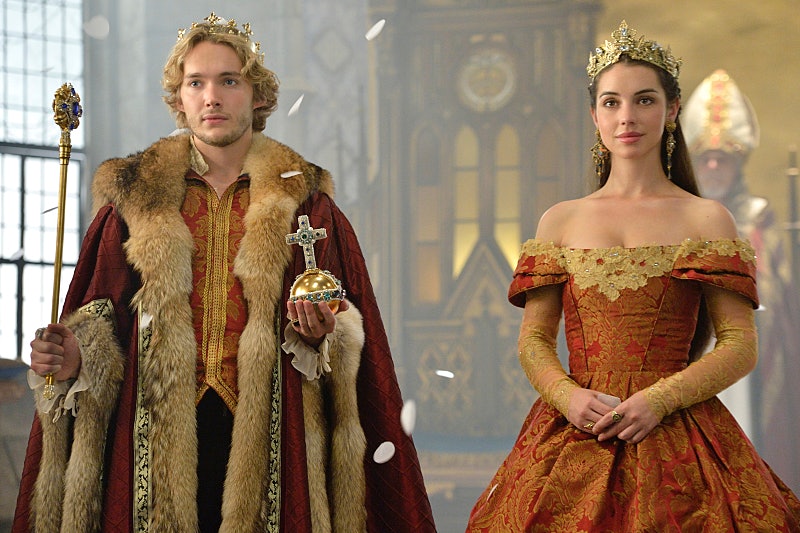 Let me just start by saying I love it when there are ghosts on Reign. It's a historical drama that gives zero effs about history. It's ballsy and does whatever it wants. If that's having a Phantom of the Opera -style "ghost" in the walls of the castle? So be it. Crazy pagan rituals? Sure, why not. This week's episode, "Coronation," was ostensibly about Francis and Mary taking the throne and all of the political ins and outs that entails, but the return of King Henry's ghost stole the show. Last week, he possessed one of Lola's nannies and this week, Francis enlisted a mystic to get his dead daddy talking again. YES. More of this, please. Here are five more characters Henry needs to possess this season.

Queen Catherine is a total badass. She knows politics. She's not afraid to make the tough choices to maintain her rule (and to keep her nearest and dearest safe) and she has hated Henry for longer than most people have known him. But she's also loved him. There is so much inner conflict between Catherine and Henry going on inside Catherine when she's in total control of her body. Imagine how she would react if he actually possessed her. And what if she could fight it? What if Catherine and Henry could have one last epic battle of wits, with both sides acted out by Megan Follows? Perfection.

Also, Catherine has always been fantastic at having the upper hand, even when it doesn't seem like she should.

Mary and Henry always butted heads and standing up to him was a big part of what proved she was going to be a force to be reckoned with. Henry has a major grudge against Mary for not bending to his will and I'm sure he could have some real fun (and by "have some real fun," I mean "do some really, really terrible things") in her body.

Henry took Kenna's innocence and nurtured the most manipulative side of her. He also saddled her with an unwanted marriage to Bash (though she seems to have accepted the union now). Henry and Kenna spent a lot of season one fighting for control over each other.

Henry's first target was Lola's nanny, which was terrifying for Francis because it put him so close to his son. Henry couldn't get much closer to Francis' son than by possessing his mother. Plus, putting Lola and/or the baby's life in peril? That's ratings gold.

Henry is back and it seems an awful lot like he's looking to avenge his death – thus the terrorizing Francis thing. What would he do if he were able to take control of Francis' body? The first (and scariest) thing that comes to mind is suicide, but I think it's much more Henry's style to just try to keep on possessing Francis until the end of time (or at least the end of Francis' life) to regain his crown. Plus, he was already willing to kill his heir and marry Mary to keep his power in tact. He is not above this, people.

Whatever happens with this storyline, I'm all for it. Henry is truly insane (in the best AND worst ways) and remember that he is responsible for the standout best moment of Reign thus far: