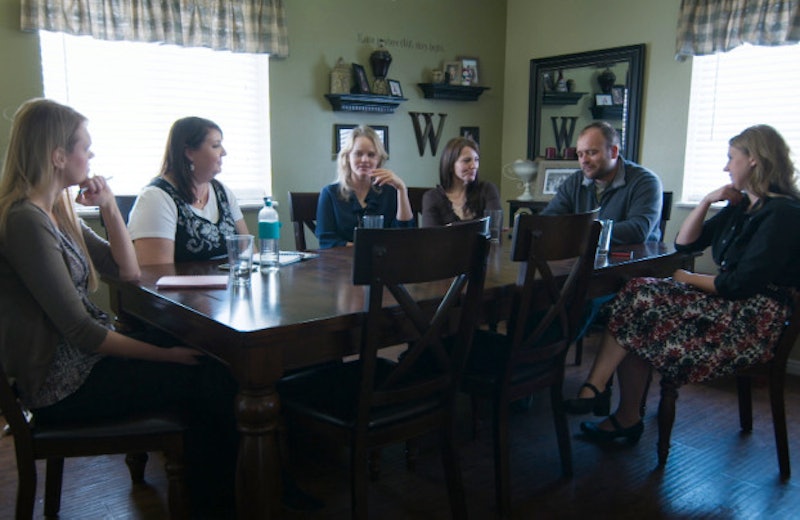 While the practice of polygamy may call religion to mind for many people, the Williams family, who star in the TLC series My Five Wives, don't exactly fulfill those expectations — at least not anymore. Brady Williams was raised as a fundamentalist Mormon. While the Mormon church no longer supports polygamy, his family converted to a fundamentalist sect that did believe in men having multiple wives when he was 16, called the Apostolic United Brethren. Brady was an involved church leader until the age of 34. All five of Brady's wives were also raised in the fundamentalist Mormon Church, and expected to be involved in a polygamous union.

But in 2004, the Williams decided that they no longer wanted to be a part of the AUB, but have maintained their commitment to their polygamous relationship. Now Brady says he's more spiritually inclined towards Buddhism, and the entire family has decided to leave the Brethren because of the controlling ways the patriarchs are encouraged to treat their wives.

That's not the last surprise, either. The Williams family also support socially liberal positions. Since they have an uncommon family arrangement, they say they don't want to discriminate by limiting other people's marriage rights. For fans of TLC's other reality series about unique families, it probably comes as quite a shock, since 19 Kids and Counting's Duggars, monogamous independent Baptists, have extremely conservative beliefs, creating a stark contrast between the two families.

The Williams family also consider themselves all feminists, even (especially) Brady. Their way of expressing feminism probably doesn't square with a lot of others', but considering that there are plenty of women and men in the public eye who still shy away from calling themselves "feminists," at least they're willing to own the title. To the Williams, their feminist acts include not calling Brady the head of the household, and splitting the time between wives equally, rather than based on Brady's opinion of who wants or needs the time most. Every woman's needs are weighed equally, and before making any big decisions, they consult among all six parents.

One thing that the Mrs. Williams are dead right about is consent. They insist that even when their marriage is difficult and they're facing jealously, they all are consenting adults who do not feel forced into this relationship, and that's what they want to impress on their daughters — that whatever type of marriage they choose, it should be because they want to, not out of fear or intimidation from a religious community.