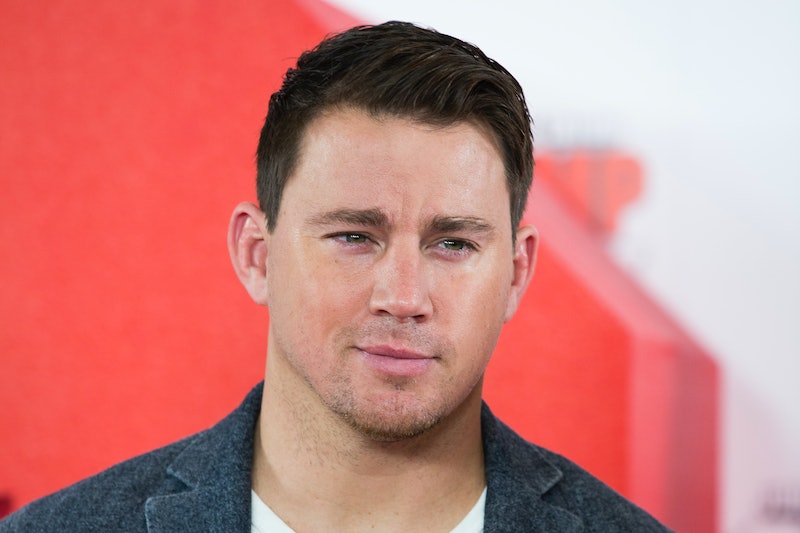 The eagerly anticipated sequel Magic Mike XXL doesn't hit theaters until summer of 2015, but that doesn't mean you won't be able to get your shirtless Channing Tatum fix until next year. (And, no, not just the zillionth airing of Magic Mike on HBO.) Today, Us Weekly exclusively released never-before-seen footage of a young Channing Tatum stripping at a revue called Male Encounter back in 1999. A gift to us all! Especially those of us who couldn't make the Magic Mike XXL casting call for extras!

The clip of the then-18-year-old future superstar (he went by Chan Crawford back then) features some truly can't miss moments. Some of them are sexy, some are funny, most are downright grainy. However, if you don't have time to watch the minute-and-a-half video — or, more accurately, you don't want to get busted for watching something so very NSFW at work — we've picked out the most pivotal moments. (Heh, pivot-al. Get it?)

Fittingly, the banner that hangs behind the dancing, thrusting, almost completely nude Tatum reads, "You have to see to believe." Fine, twist our arms.

The Moment Where Channing Shows His Butt

OK, sorry, there's no way we can show that. This is a family-friendly site, people! Same goes for the moment when he puts his hand down his banana hammock.

Now, that is the ultimate story to dine out on for the rest of your life. "Oh, NBD, just got a kiss from Channing Tatum back in the day."

Those moves look awfully familiar. All that's missing is Ginuwine's "Pony" playing in the background.

The Moment Where He First Reveals His Abs

The Moment Where the Emcee Asks, "What Do You Think of the Way Chan Wiggles It?"

No one — not even you, dear Channing — can pull this look off.

You can check out the entire video in its full gloriousness here.