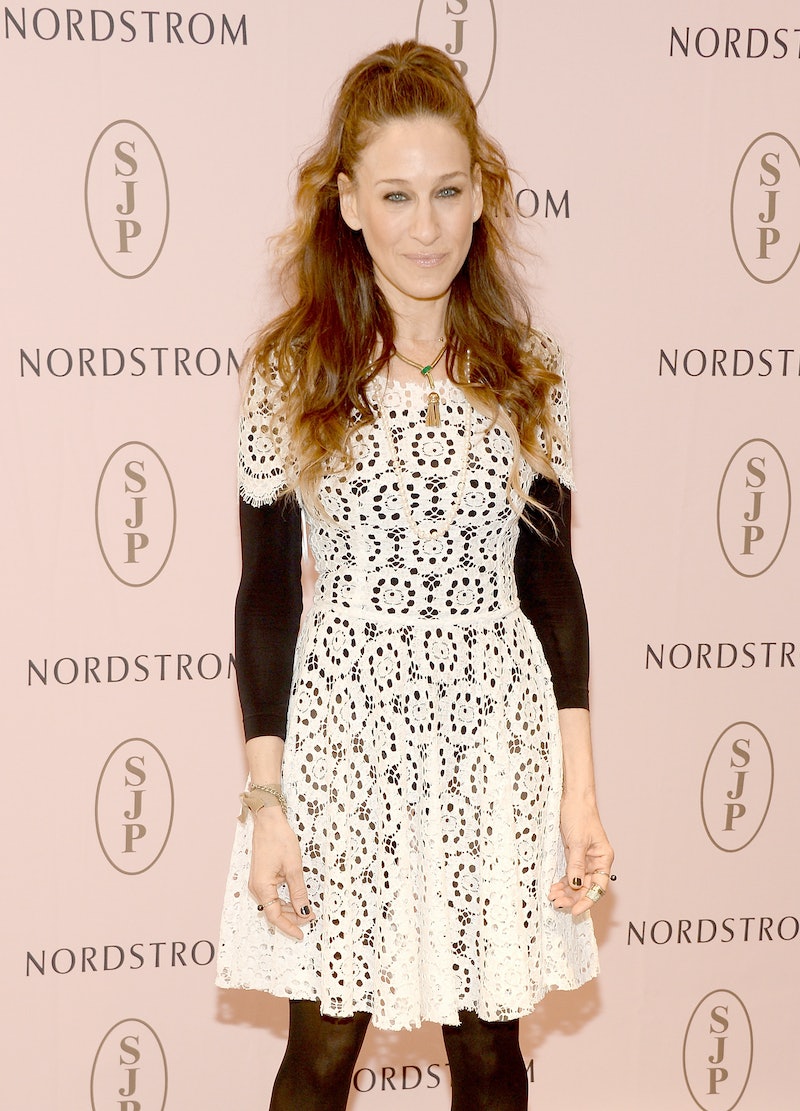 Perhaps the most weighted moment of Sex and the City was when Big tells Carrie that he can't go through with the wedding. It was a type of weight that shuttered through the movie seats when people went to see the film and still brings tears to my eyes when I watch the scene. It's a weight that haunts you, and haunted Carrie, sending her into a lonely space that not even shopping or writing about love could restore. A weight that could only be lifted with a tiny pair of blue Manolo Blahnik's, which like Carrie, sat lonely, waiting for the perfect moment to rekindle the broken love between Carrie and Mr. Big. Now, Carrie, er, Sarah Jessica Parker is launching her very own bridal collection, giving SATC fans a chance to walk in her on-screen shoes.

Yahoo Style reports that the shoes will sell for $355 to $545 and be released on Zappos in Spring 2015. Although the images of the collection haven't been released yet, the shoes are said to be inspired by SJP's evening shoes featured in her shoe collection, which hit Nordstrom stores in February. The shoes will come in three colors: white, ivory and blue. How very fitting, Ms. Parker.

The announcement of the SJP Bridal Collection tails the many celebrity weddings that have kept us swooning for love and fashion. Angelina Jolie melted our hearts when she walked down the aisle in an Atelier Versace dress sprinkled with doodles by her kiddos. Lauren Conrad kept the media in a frenzy as we anticipated what her dress might look like; her custom-made Badgley Mischka dress was sweet and simple. There were many whispers about the Kimye wedding, in which Kim Kardashian floored us all with her Givenchy dress and heavenly veil. And Amal Aludmuddin, albeit revoking us of all future-husband claims we had placed on George Clooney, stunned in an Oscar de la Renta off-the-shoulder number, which will reportedly be available at Bergdorf Goodman.

However, none of these weddings can compare to Carrie Bradshaw's exquisite on-screen nuptials; both the extravagant affair planned at the New York Public Library and the sweet and private moment shared in the courtroom. Now that they're married and Carrie has to officially wear her wedding ring after her slip-up with Aidan overseas, what happens next in the Carrie-and-Big saga? As we continue to unpack the rumors of Sex and the City 3, let's take time to admire Carrie and Big's long, complicated, sometimes unrequited, other times much-desired relationship.