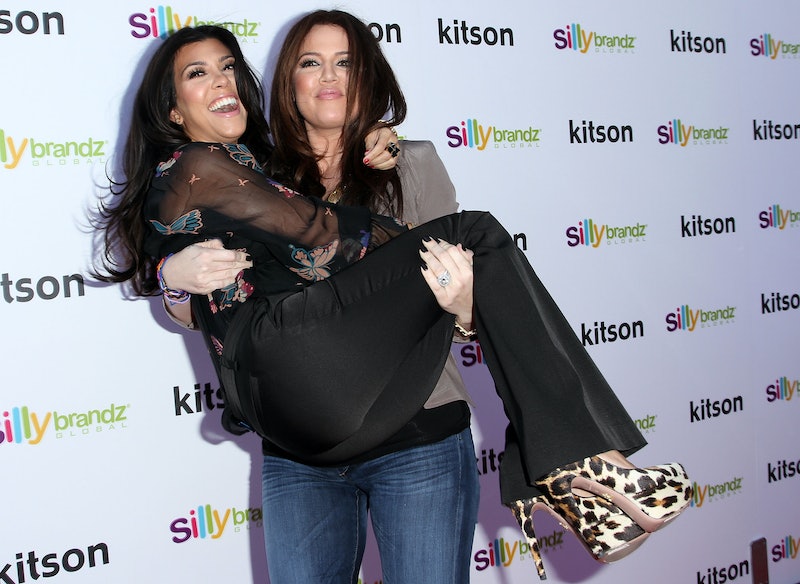 Residents were less than thrilled when Kourtney and Khloe Kardashian announced their "takeover" of the Hamptons, but that didn't stop the sisters from filming their Keeping Up With the Kardashians spinoff this past summer. Kourtney and Khloe Take the Hamptons premieres on Nov. 2, and while I'd love to say that I stand in solidarity with my fellow Long Islanders, I'm also kind of thrilled to see what kind of shenanigans these ladies get up to while opening a Dash pop-up shop in Southampton. We already have a trailer for the new series, which promises the same goofy antics that Kourtney and Khloe get into on their mothership series, as well as some more serious issues, like Kourtney's partner Scott Disick's hospitalization.

But despite the more problematic aspects of this reality show — should we really laugh at Scott's drunken behavior while he's very clearly struggling with it later in the season? — the Keeping Up With the Kardashians spinoffs are typically a pretty good time, and this one promises to be the same. (That is, unless you're a Hamptons resident who has been forced to deal with Kardashian-created traffic. Ugh.) So what can we look forward to when Kourtney and Khloe Take the Hamptons premieres this November? Check out what fans will see.

The youngest Kardashian sister's then-beau French Montana will definitely appear on Kourtney and Khloe Take the Hamptons. Unfortunately, the couple broke up after their sweet summer in the Hamptons — allegedly due to French's flirting with Khloe's best friend, Malika Haqq.

Khloe & Scott In A Bathtub

We can officially put Scott wearing a lifejacket in a bathtub on the list of "Most Scott Disick Things Scott Disick Has Ever Done."

Baby number three is on the way for Kourtney and Scott! The trailer previews some of Kourtney's doctors appointments and other baby prepping. Exciting stuff.

Kim Kardashian makes an appearance on the series — because of course she does — and immediately starts questioning her friend Jonathan Cheban about the secrets he potentially spilled about her family to the press. Draaama.

I'm still rooting for Kris and Bruce Jenner to reunite, because apparently I care a lot about the love lives of middle-aged reality stars. But I'm equally as excited to see Kris' potential foray into the dating world. The trailer already shows her flirting with the house chef, which leads me to believe that future dating adventures will be equally as disastrous. I am very intrigued.