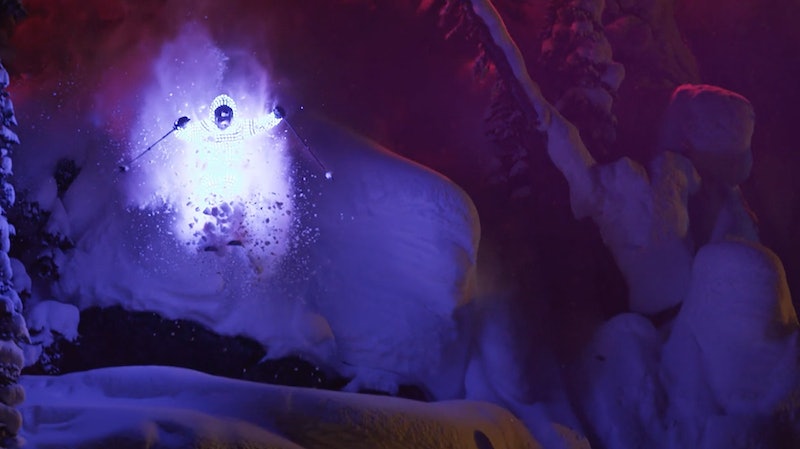 If you’re a fan of skiing, snow, or things that glow in the dark, then you’re going to go bonkers for Afterglow, a short film/advertising for LED technology. Afterglow is about the ethereal, mystical experience of skiing in the outskirts of Canada...in the dark...with an LED light suit on. In this brief, hypnotic segment, we are encouraged to become one with the pretty lights and graceful snow sport. Skiers don a light suit to not only illuminate their way so they don’t crash into a tree and die, but basically turn what would be your average ski slope into a disco-ball. I would never try this out myself, but I am very, very hypothetically into it.

Even if you think skiing is so What Your Snobby In-Laws Do Twice A Year, this video is seriously a work of art. You’ve got glistening nature lit up by two brave humans whizzing around in snow and the calm of white, freshly settled snow juxtaposed with fast-paced glow in the dark action. Perhaps this is a metaphor for looking on the bright side? The environment? Our lives? Humanity? Why we should invest in Phillips TV? It’s clearly up for discussion. We also have modern-folksy band First Aid Kit playing in the background, and a mountain that has basically became grounds for a rave. What more could we ask from a documentary about skiing in the night time? (The answer is nothing: all of our glowing ski trip documentary needs have been covered most fruitfully.)

In a Huffington Post interview with one of the film’s directors, Nick Waggonor, the man behind the magic discusses “bring[ing] a totally new aesthetic to skiing,” what it took to produce this sequence (apparently a LOT of time and equipment and high threshold for the cold), and what was done to reduce energy costs while filming. Waggonor says, “In spite of what seems like a massive fossil fuel burn, our daily routine was entirely human-powered, carrying 100-pound rigs and heavy weight lights up and down...” All I can really say is, someone’s been working on their night moves. (We can pretend that Bob Seger reference never happened.)

More like this
How To See The Lunar Eclipse On May 15-16, 2022
By Kaitlyn Wylde
Meet The Disney Imagineer Bringing 'Guardians Of The Galaxy' To Epcot
By Charlie Mock
What Is “Night Luxe?” Breaking Down TikTok’s New Aesthetic
By Courtney Young
The 6 Best Air Conditioner Alternatives
By Vanessa Spilios
Get Even More From Bustle — Sign Up For The Newsletter