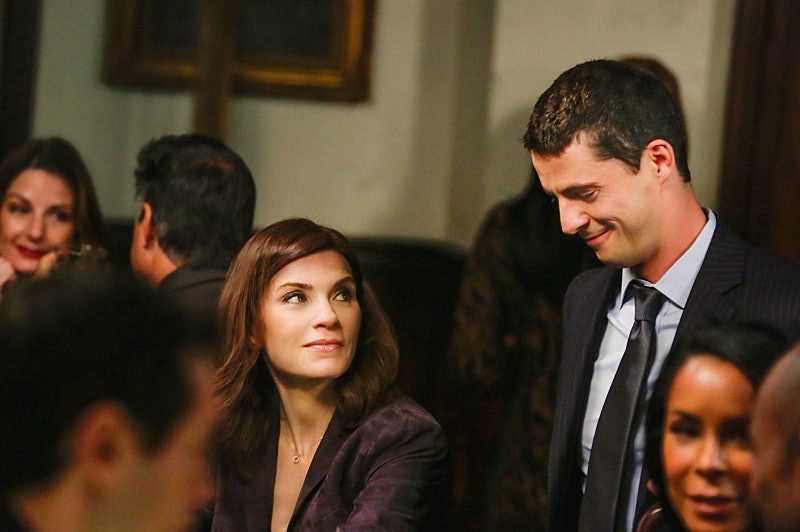 I've been waiting all season (OK, four episodes) for this moment! On Sunday evening, The Good Wife 's new episode, "Shiny Objects," finally gave Alicia Florrick and Finn Polmar fans some much-needed hope — and it's about damn time. We haven't really seen Alicia and Finn interact in a friendly way since the end of Season 5. This season, they've mostly just been at each other's throats in the courtroom arguing over Cary Agos' drug case. However, tonight, Finn spoke in support of Alicia as she officially announced her campaign to become the next state's attorney, and my heart nearly exploded from the cuteness of it all. Eli Gold and Peter Florrick didn't especially want Finn to speak at the event, but Alicia was all, "I want Finn to speak because he's awesome, so, too bad!" And that was basically the end of that. You can't stand in the way of love, people.

The fact that Finn still wants to support Alicia even though it might make things difficult for him at work (his boss is the current state's attorney, James Castro) is so amazing. Yes, Castro has proven himself to be quite a bastard in recent episodes, but Finn isn't scared of him. He cares about Alicia, he wants her to do well, and he's willing to make sacrifices in order to help her out. Sigh. Could Finn be any more perfect?

"Shiny Objects" had one definitive moment of Alicia/Finn adorableness that absolutely must be discussed: When Finn calls Alicia to say that he would be "honored" to make a few opening remarks at her announcement, Alicia asks if his decision is going to "hurt" him at work. Finn says, "I don't know. I'm not sure of anything these days. I like living on the edge." Alicia giggles. SHE GIGGLES. OMG YOU GUYS, THEY'RE FLIRTING.

If Alicia goes down, Finn's goin' down, too. That's so sweet (as long as they both survive the fall)! They're so devoted to each other. Why aren't they a thing yet? Oh, because Alicia still feels some sort of strange loyalty to Peter? Or something?

Memo to Alicia: Finn is incredible, Peter is crap. Yes, I know that Peter showed up to your announcement unexpectedly (after screaming at you a lot), and for some reason, that seemed to give you a charge, but please, don't get sucked into that whole mess again. Peter is a liar, a cheater, and I have reason to believe that his breath smells really bad (just a hunch). Don't be a fool: Choose Finn...preferably within the next couple of episodes. I'm getting tired of waiting.