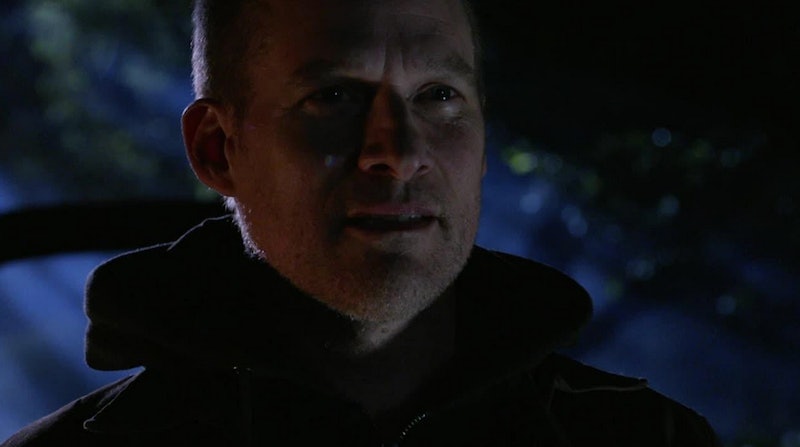 After all of that hype and anticipation, this is what goes down? There's not a single Revenge fan that hasn't been waiting for Emily Thorne and David Clarke's reunion ever since the series revealed that David was alive in the Season 3 finale. And it seemed like it was supposed to happen during Sunday night's "Meteor." Well, it did, but not in the way we expected — Emily saw David for the first time on Revenge but, just like last Sunday's moment when David realized that his daughter was alive, the father-daughter duo didn't actually reunite. They've both got a visual of the other now, but they haven't actually said two words to one another.

It's easy to see what Revenge was getting at with this type of reunion — David and Emily now know that the other exists, but there's just too much red tape to make it work right now. David's officially America's new hero and celebrity and he's got the watchful eye of Victoria on him at all times and Emily's got the fact that she's supposed to be dead preventing her from going public that she's David's real daughter. God, life can be so hard on Revenge.

But here's the thing about Emily and David going all father-daughter on Revenge — he kind of proved on Sunday night that he's not exactly the stand-up guy she thinks he was. In fact, David Clarke has kind of started to scare the hell out of me on a weekly basis from learning that he basically lived in his own grave (OK, mausoleum) for years to tonight's episode. During "Meteor," David had to recount his story of what happened to him and how he got out of prison to the CIA and he blamed the whole shebang on Conrad. I mean, obviously he knows that he stabbed Conrad and he's probably dead be now, but the sheer mastermind that's become David Clarke is terrifying. And I'm not necessarily sure that he and Emily should be together.

Sure, some would argue that both of them are so far from the good people that came into this world as so they deserve to be damaged together. But I think Emily still has a shot and David, unfortunately, does not. Considering how desperately he wants his second chance at happiness with Victoria who really didn't stand by him in the past.

Emily and David getting together like this or at all, just isn't the right thing. I mean, did you see him whipping himself? He's snapped and Emily's barely hanging on, they can't just rebuild a relationship that crumbled 20 years ago, especially when David's become a more skillful liar than Victoria. I really wanted him to be a stand-up guy and maybe, if Revenge ended this season, he and Emily could ride off into the sunset and try to help one another live again. But, apparently, that won't be the case.

I'm not really rooting for David Clarke anymore because he's just too scary. But perhaps, whenever Revenge is ready, David and Emily's REAL reunion can change my mind.