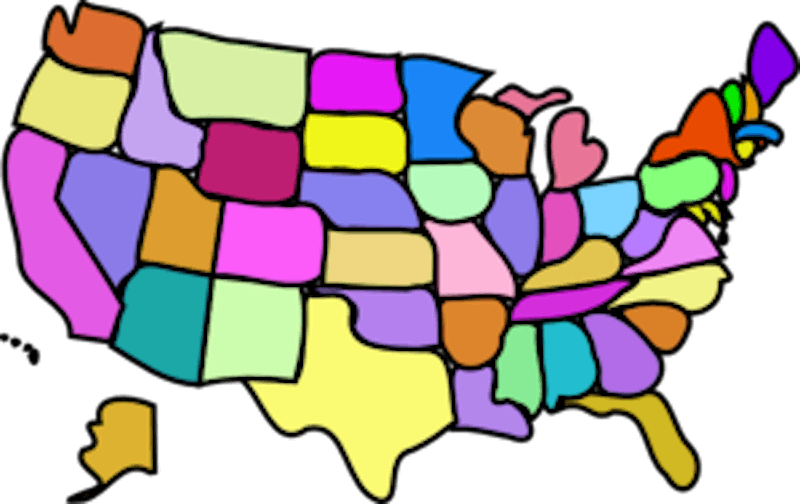 The results are in: a new report reveals the top 10 worst states for women in America, and ladies, if you were looking to move to a non-coastal region anytime soon, you might want to rethink your decision. According to 24/7 Wall St.'s recent analysis of a 2013 report from the Center for American Progress entitled "The State of Women in America," some of our midwestern and western states pose serious issues for women in terms of economy, leadership, and health.

Of particular concern is the status of income equality within these states. Although it's no secret that we have a wage gap problem in America, statistics from the Center for American Progress prove that some states are better than others at closing this gap. Compare, for instance, a state like New York, where women make 86 cents for every dollar that a man makes, with 24/7 Wall St.'s second worst state, Wyoming, where women only make 69 cents for every man's dollar. Based off of this research, it's clear that some states should be working harder to provide more economic opportunities for its female population. Of course, it all starts with identifying the problem. Here are six of 24/7 Wall St.'s worst states for women in America:

Utah has one of the largest pay discrepancies in the country — women earn only 70 percent of what a man earns annually. It also ranks poorly in terms of the number of its female population occupying government positions. Of the 75 seats in Utah's House of Representatives, only six of these seats are filled by women, and the state has only five female state-level senators. Overall, women make up just 16.3 percent of state legislators.

Wyoming is the second worst in terms of the gender wage gap, but 24/7 Wall St. speculates that this may be due to the size of the coal mining industry. Nearly 40 percent of the nation's coal comes from Wyoming, meaning that the industry has a huge presence in this state. Mining jobs also tend to be extremely male-dominated, leaving little room for women to participate in the workforce. On the bright side, at least women in this state are doing well in terms of education — 94 percent of them have earned their high school diploma as of last year.

Idaho presents a particular problem for women with families. Not only does it fail to provide funded pre-kindergarten programs for kids, it also lacks family-friendly paid leave and sick time laws. It's also one of the worst states in the country for female management roles. Only about a third of women in this state hold a management position.

Mississippi has the highest poverty rate among women, and the highest infant mortality rate. They have zero female representation in U.S. Congress, and less than 84 percent of women in Mississippi have completed high school. And although women in Mississippi hold a significant number of management positions, this doesn't seem to be doing anything to boost their salaries, which sit at a meager average of around $30,000 a year.

Get this: North Dakota does not require employers to offer paid maternity leave. To make matters worse, the state also doesn't provide funding for state preschools. It also doesn't fare well for women in managerial positions (28.3 percent), or in terms of the gender wage gap (a woman's annual salary is $15,000 less than that of a man). Apparently, however, North Dakota is trying to do better by expanding Medicaid to cover individuals and families with incomes up to 138 percent of the federal poverty line. Here's hoping!

Things are a little brighter for women in government positions in Montana — they make up 27 percent of the state's political leaders, which is actually a comparatively high number (although it could stand to be higher). Unfortunately, women in Montana have some of the worst access to healthcare services in America. Last year, nearly 16 percent of Montana's female population didn't even have health insurance.

While some of these statistics may seem discouraging, this data is crucial in identifying areas for improvement among various areas in our nation. Hopefully being listed as one of the worst states for women will cause some of these states to consider reforming their healthcare and education systems, and work toward absolving the wage gap between men and women. In the meantime, the comforting news is that not all states present such disheartening conditions. Like New York, areas such as Washington D.C., Arizona, and California are coming closer to achieving wage equality, and one can only hope that their example will encourage others to follow suit.