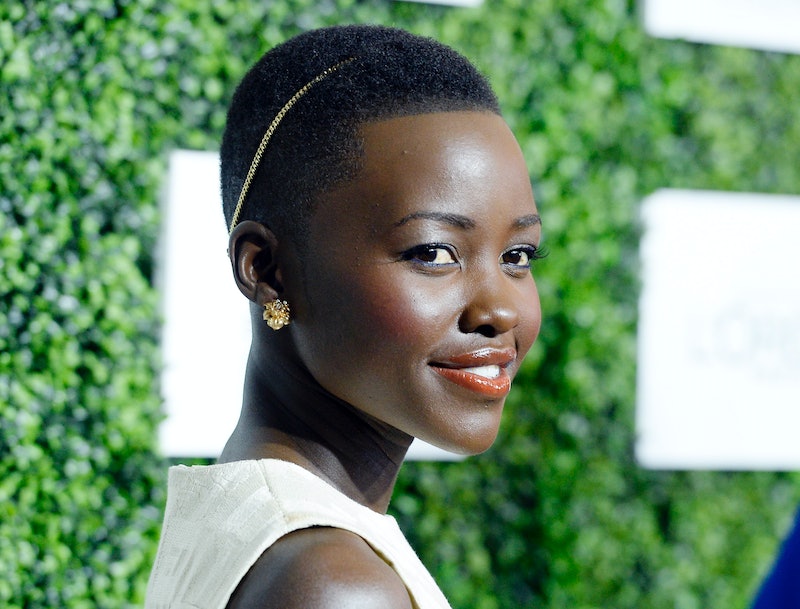 Lupita Nyong'o is so much more than just a fantastic actress. Her break-out role as Patsey in the powerful 12 Years A Slave earned her international attention, an Academy Award, and a deal with Lancôme as the new gorgeous face of their makeup brand. Her recent guest spot on Sesame Street featured the actress telling children to love the skin they're in since she had a similar struggle coming to terms with her darker-skinned beauty. And in a speech given at the Black Women in Hollywood luncheon last February, she told the audience, "What is fundamentally beautiful is compassion for yourself and for those around you." Well, her compassion is shining through once again, as Lupita Nyong'o fights to preserve a historical slave site in the Shockoe Bottom neighborhood of Richmond, Va.

Shockoe Bottom along the James River is a place of great significance in America's slave trade history and it is currently being threatened by a plan called "Revitalize RVA" which would build a baseball stadium and other shops on the site. Nyong'o took to her Facebook page on Sunday to educate her fans about the Virginian slave trading site and urged them to write letters to Mayor Dwight Jones expressing their disapproval of the construction plans. She also posted her own letter — in gorgeous penmanship, I might add — to show exactly how much the preservation of this devastating, though incredibly important, part of American history means to her.

In her letter, she encourages the mayor to withdraw his support of covering up the archeological site, which was home to America's second largest slave-trading center. She wrote:

Evidence of America's slave history simply must be preserved, as the legacy of slavery affects all American people. The tactic of the enslaver was to systematically erase all memory of the African's past; let us not repeat this ill by contributing to the erasure of his past in America too. Though this history is ugly and unjust, Shockoe Bottom is a site of conscience, a place where we can bear witness to the human rights abuses of slavery, learn from the lessons of history, and spark a conscience in people so that they can choose the actions that promote justice and lasting peace today.

Nyong'o goes on to eloquently argue that the schools the mayor helped build in Richmond would benefit from having this direct source from which to learn and observe American history and would add to the students' "unique educational experience." The actress also says that her performance in 12 Years a Slave was enhanced by what she learned when visiting plantations and museums in Louisiana and she would not have given the depth of performance that we saw on screen if that historical information was not preserved and made available to the public.

She finished her letter with this very powerful plea:

We would be appalled if a casino was built over Gisozi in Rwanda, a mega mall was constructed over Robin Island in South Africa, or new condos were erected through the gates of Buchenwald in Germany. Let us therefore not have a baseball stadium sit atop the legacies of slavery at Shockoe Bottom.

With her comparison to Rwanda and Germany, Nyong'o certainly brings the gravity of the situation to the forefront of this argument. What happened at Shockoe Bottom cannot so easily be allowed to be swept under the rug of Richmond's revitalization plans. In this instance, as in the past, Nyong'o is using her celebrity power for good. The Kenyan actress will forever be inextricably linked to America's slavery history with her performance as Patsey and now she is taking what she learned in preparing for that role and continuing to foster a conversation about America's tragic past. Shockoe Bottom is an important reminder of our history, what our ancestor's did and survived, and how preservation of these sites is a testament to their importance.

As Nyong'o says in her letter, historical sites like Shockoe Bottom serve as a place where we can "bear witness." The struggles of those who have come before us should not be allowed to be forgotten, and Nyong'o's efforts in preserving this site further prove that the actress is so much more than a pretty face and incredible talent. She's fighting for an important cause, and I think it's one that deserves America's attention.