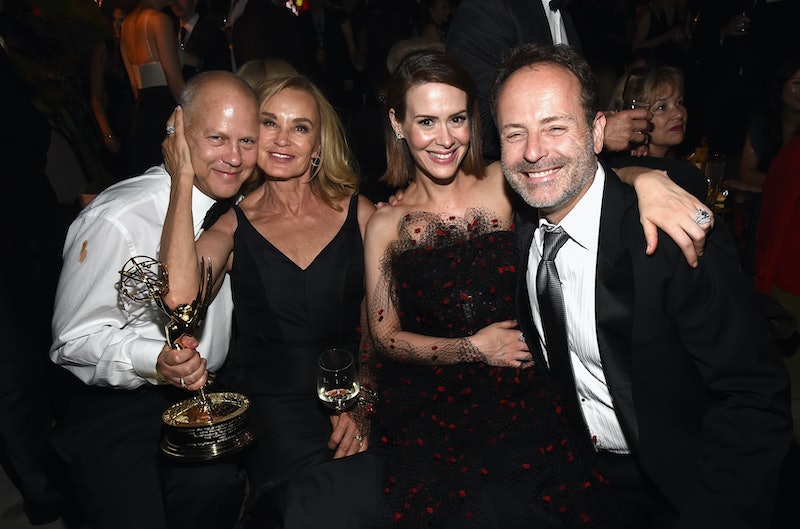 If you want to love American Horror Story but are too scared, I have great news. Ryan Murphy has created Scream Queens , a horror-comedy anthology, with frequent collaborators Brad Falchuk and Ian Brennan. And this isn't just a pilot that fans may or may not see — it just scored a straight-to-series order from Fox, set to air next fall. Considering that Glee will end in the spring, it seems the network is trying to keep Murphy & Co. bringing in viewers while dabbling in the crazy success that FX has had with his twisted brand of horror. Thankfully, they didn't make this one a full-on musical like Glee, but it is set at a school.

Like with AHS, each season will revolve around a new setting and cast of characters. But as the title implies, Scream Queens will always have two female leads. Season 1 kicks off on a college campus dealing with a string of murders, and Murphy says they've "already begun a nationwide search for those women, as well as 10 other supporting roles."

Could this finally be Lea Michele's chance to cross over into Murphy's other realms? We all know the girl knows how to shriek in a diva-like fashion as Rachel Berry, but when it comes to axe murderers, not so much. This also opens the door for Jessica Lange to keep working with Murphy, perhaps as a headmaster with a twisted secret. Honestly, I think this show will be a hit for a whole different set of people than those who set season passes for every season of AHS, though. Scream Queens doesn't sound campy, but it does seem like the brand of horror for scaredy cats who can't deal with bloody-faced monsters, ghost rape, or terrifying clowns — a.k.a. me.

I watched the first season of American Horror Story because I love Connie Britton and (mostly) watched Glee until they brought in new kids in Season 4, but as soon as they introduced an asylum in Season 2, I was like, "Nope. Hard pass." I continued to not watch for Coven and now Freak Show, but I feel like I'm missing out every time some headline tells me the craziest, most messed up thing just happened on the show. So, will Scream Queens be the horror series that I can finally watch with the lights off? Maybe. But I'm willing to give this new genre a shot next fall.