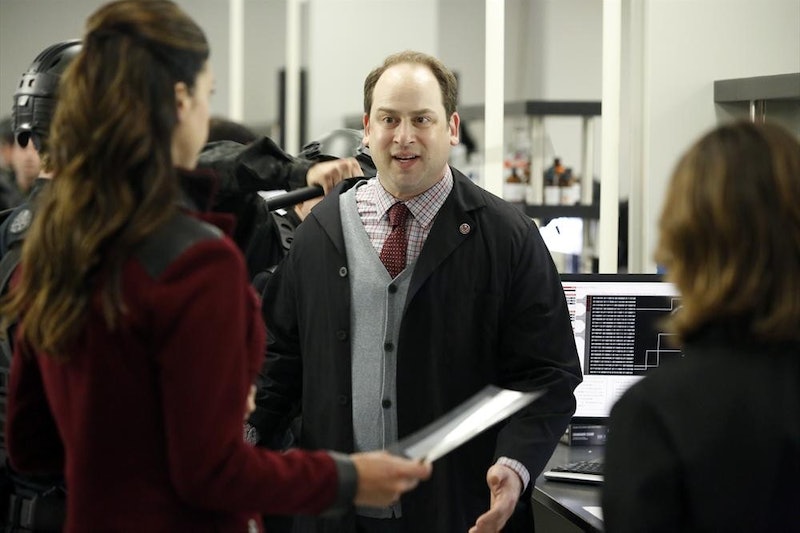 ABC's Marvel's Agents Of S.H.I.E.L.D. continues its rollout of popular second-tier superheroes in this week's episode, titled "A Hen In The Wolf House." The character making the leap from the comic book page to the small screen this time is Barbara "Bobbi" Morse, aka Huntress, aka Mockingbird. The super strong, kung fu-fighting, biochemist spy will be portrayed by Friday Night Lights alum Adrianne Palicki. (She can also currently be seen on Season 2 of NBC's About A Boy.) It's exciting to see the would-be Wonder Woman finally get the chance to play a superhero, and Marvel fans are likely pumped to see the heroine kick some ass and take some names. But not so fast — Agent 19 will have one major twist on Agents of S.H.I.E.L.D.: Morse is working for Hydra. *record scratch*

That's right. In ABC's version of Mockingbird's story, she is the nefarious organization's Security Chief, which is quite a 180 from all that time she spent in the comics ferreting out corruption within S.H.I.E.L.D. with Clint Barton, aka Hawkeye (with whom she ended up eloping). So what gives? Has Mockingbird actually gone over to the dark side? Is she a spy? What's going to happen to her? We won't know until we see the episode, but here are a few possibilities, all with some grounding in the comics themselves.

Yes, this Mockingbird is actually evil

Of all the options, this would by far be the biggest departure... which kind of makes me think it's going to be the one the writers actually go with. In the comics, Mockingbird has been staunchly loyal to S.H.I.E.L.D. for over four decades now (she was first introduced in 1971), and to make her a true blue Hydra operative for the show would certainly be shocking. It's not like the Marvel Cinematic Universe has ever been 100 percent faithful to the comics and let's face it — Mockingbird isn't one of the most famous superheroes in the Marvel stables. Most viewers probably won't even know who she is, much less that her allegiance has been changed.

And it's not as though Bobbi Morse has never been evil on the page. After a certain amount of time, every comic book character is bound to be good, evil, dead, alive, and everything in between. Mockingbird has alternately been replaced by a Skrull impersonator and abducted by Ultron, who turned her into a robot wife named Alkhema. Perhaps evil-Mockingbird won't even be the real Mockingbird at all, but a robot/alien replacement.

Bobbi Morse is on an undercover mission

Of course, it's possible that Mockingbird, like Agent Simmons, is simply on an undercover mission, sent by Director Coulson to infiltrate Hydra. This would easily explain her presence inside the organization without rewriting the character's history. Mockingbird is known in the comics for being especially adept at espionage — at one point she even founded her own spy group, the World Counterterrorism Agency... which basically sounds like the Marvel version of 24's CTU. (Crossover, please?)

One flaw in this theory: while it's entirely believable that Jemma was able to get as far as Hydra's basement laboratory, how likely is it that Bobbi Morse could ascend as high as Security Chief? That's an awfully lofty position for a double-agent. If Mockingbird does turn out to be a spy for the good guys, then we'll likely learn that she's been in place for a very long time — as in, before the fall of S.H.I.E.L.D. It simply strains credulity that anyone could have climbed so high so quickly since Hydra went public not too long ago.

Or maybe she's been brainwashed

Then there's the middle ground: perhaps Mockingbird really is working for Hydra, but not of her own volition. The show took great pains to show us Hydra's brainwashing capabilities in the last episode. Isn't that as good a clue as any that Bobbi Morse's brain has been hijacked by Daniel Whitehall and his creepy goon? If this is the case, don't be surprised to see Mockingbird finally break free of her mental cage just in time to save Agent Simmons from a life-threatening dilemma.

This wouldn't be the first time in Marvel history that Bobbi's brain has been tampered with, either. In one of her most recent comic storylines, Mockingbird went undercover at A.I.M. (Advanced Idea Mechanics), only to be discovered and brainwashed. And the first thing she did after having her mind rewired was to kill one of her fellow agents. All I'm saying is Jemma better watch her back.

First of all, there's the concerning fact that — to the best of our knowledge — Palicki is only signed on to appear in one episode of S.H.I.E.L.D. Does this mean Mockingbird is going to die in the same episode in which she's introduced? It's more likely than you might think. After all, the show set a precedent earlier this season for hyping up a high-profile guest star only to immediately kill them off when Lucy Lawless joined the premiere as Agent Isabelle Hartley... and then her character perished before the credits even rolled. Better steel yourself now for another shocking death.

Another reason it's not looking good for poor Bobbi Morse: she's kicked the bucket in the comics, as well. In the West Coast Avengers series, Mockingbird was killed by the villain Mephisto, so her dying on the show wouldn't even be a departure from the source material. Of course, Bobbi was soon brought back — or at least her reanimated corpse was, as a member of the Legion of the Unliving, alongside other deceased heroes like Captain Marvel, Hellcat, and Thunderstrike. Does this mean we should expect zombie-Mockingbird sometime later this season? I'll keep my fingers crossed.