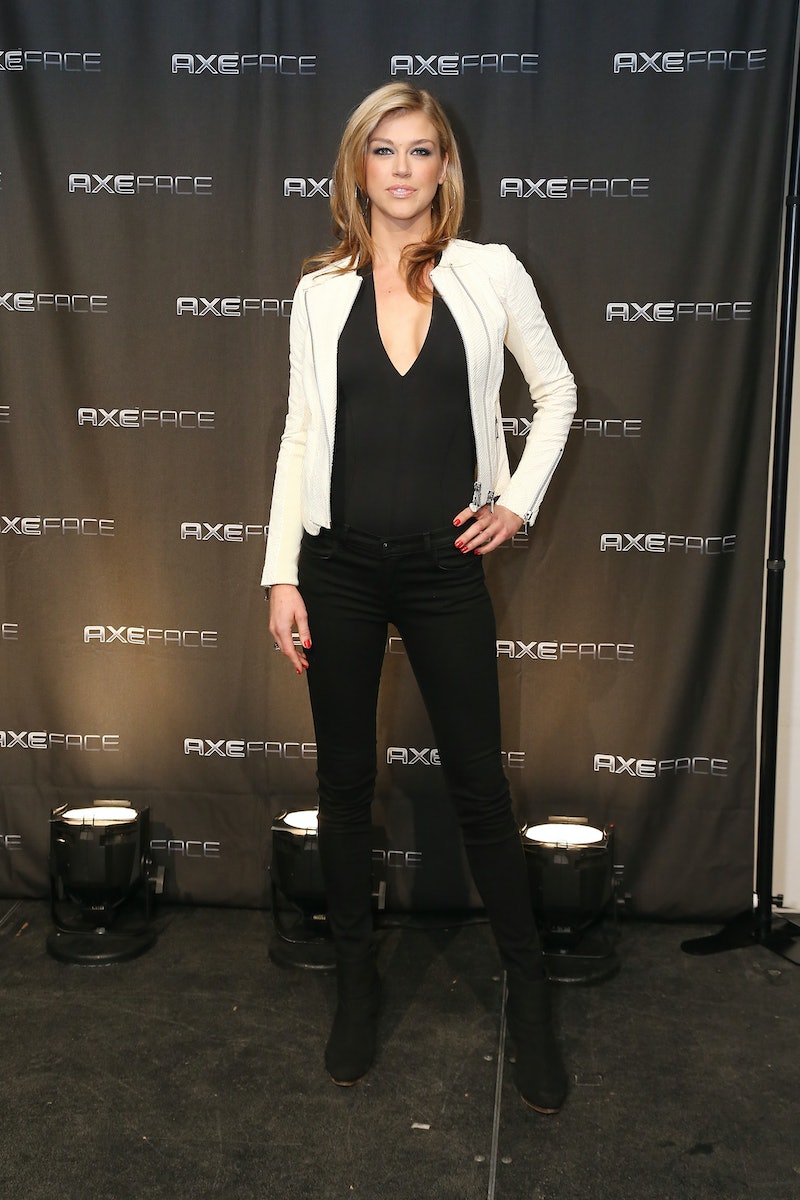 It was announced this summer at San Diego Comic-Con that ABC's Agents of S.H.I.E.L.D. will introduce Mockingbird, aka Bobbi Morse. She is an Agent who has worked alongside The Avengers in comic book history. The Comic-Con announcement was done through a cute panel introduction by Patton Oswalt as both Agents Sam and Billy Koenig. They tell us that Morse was asking for the newly promoted Director Coulson and that she's "in." What is she in for? We don't know yet. (The lanyard-loving brothers were suspiciously missing from last week's episode of S.H.I.E.L.D., by the way.) Later, we heard that Mockingbird would be played by Adrianne Palicki from Friday Night Lights. This was all well and good.

However, an official ABC press release states that "Coulson’s team is up against the beautiful and deadly Bobbi Morse -- Security Chief for Hydra." What?! She's an Agent of Hydra? This is neither well nor good! Sure enough, in the preview, she's sporting a menacing red coat.

Here's what you should know about Morse before she appears on the Oct. 21 episode of S.H.I.E.L.D. in a surprising new way.

Mockingbird in the Comics

One of the key elements of Bobbi Morse's comic book past is when she started calling herself "The Huntress" and exposed corruption in S.H.I.E.L.D. With Hydra's paws in everything, this could very well point to her role on the ABC drama series. She's into swords, which will be exciting to see on television. She is also a biologist like Agent Simmons. Something in common with everyone. What a cool girl!

Morse also has a romantic past with Hawkeye. She and Clint Barton were married. They were like S.H.I.E.L.D.'s version of Mr. and Mrs. Smith. Now, I kind of like what the Marvel Cinematic Universe is doing with Hawkeye and Black Widow, and I don't have time to get into my 'shipping preferences for all of the Avengers. However, as an ex-husband? Um, yes please. What's Jeremy Renner's schedule like? He's got tons of time probably, right? I'm guessing this will be alluded to in some form. The show has found a way to connect itself to every character in the Avengers so far and Hawkeye needs more love!

I'm going out on a pretty stable limb and assuming that Bobbi Morse is working undercover at Hydra just like Agent Simmons. The episode in question is called "A Hen in the Wolf House," according to the official press release. I sure hope she hasn't been brainwashed by that creepy Clockwork Orange device. Undercover work possibly explains the hair as well, as Mockingbird is usually blonde. Maybe Bobbi thought going brunette would make her look more mysterious, more villainous, or better-suited to Hydra-red. While it would obviously be dangerous for Morse to expose her identity to Simmons, it would help for Simmons to have an ally in enemy territory. Someone to talk to, at least.

That's the thing about introducing well-known characters in a television show with a relatively original story. You've gotta mix it up somehow. In case you missed it or need a refresher, here's the Comic-Con tease of the character.

Let's hope we get a fuller explanation when she makes her S.H.I.E.L.D. debut.