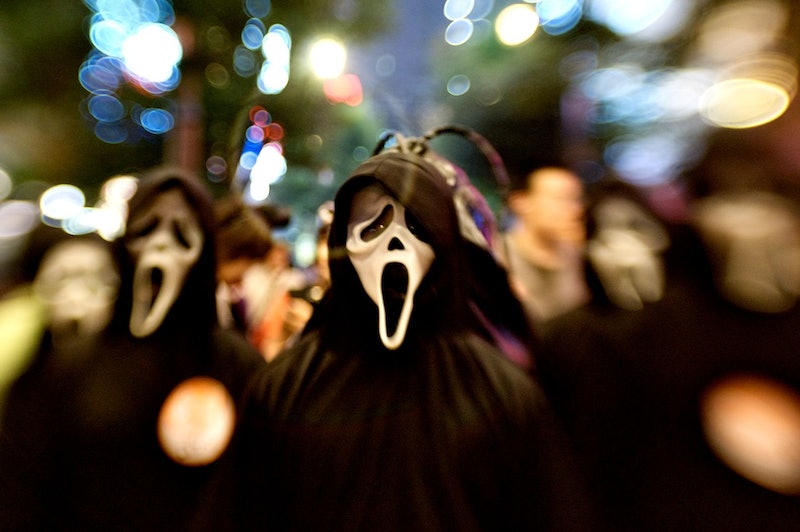 Although Halloween is still a blast as an adult, I can’t help but feel that it had a certain magic about it during childhood that it just doesn’t quite manage to maintain as you get older. Maybe that’s why so many of us look back on Halloween with such nostalgia. It wasn’t just about the night itself — although the jack-o'-lanterns, costumes, and trick-or-treating were certainly among the high points of any kid’s year — it was about the whole season. Everything had just a little extra spookiness to it, from what we watched and read all the way down to the games we played with our friends and the silly ways we would freak ourselves out, just for fun.

So for Throwback Thursday this week, why not creep yourself out, ‘90s-style? True, we may not have limited these activities only to Halloween — but engaging in them during the month of October always seemed to give them a little added punch. They also might not have been strictly ‘90s-era endeavors, although for those of us of a particular generation, they positively overflowed during that particular decade. Get ready for homemade haunted houses, games of Bloody Mary, and more spooky, nostalgic goodness. Boo!

1. Marathoning as many episodes of Are You Afraid of the Dark? as you could stand in one sitting.

Raise your hand if you did this again as soon as you found out all the episodes were on YouTube (that would be me). Also, did anyone else think the opening credits were way freakier than anything that actually happened in the show?

2. Borrowing every single volume of Scary Stories to Tell in the Dark from the library.

It wasn’t even necessarily the stories that scared us — it was the illustrations. And not the new, sanitized illustrations that appeared in 2012; I mean the creepy-ass ones by Stephen Gammell that made you want to check to make sure your face wasn’t exploding with baby spiders or your dog hadn’t turned into a sewer rat. Shudder.

Fun fact: The reason we see “monsters” in the mirror so frequently is due to a phenomenon of perception called the Caputo Effect.

And it’s still the best place to go for information about every urban legend under the sun.

Alas, we were not the cast of The Craft, so it never actually worked. Oh well.

6. Playing Manhunt with your neighborhood friends late at night.

File this one under “things our parents probably shouldn’t have let us do.” There’s nothing like playing hide and seek in the dark to bring the game to a whole new level.

7. Reading R.L Stine’s Goosebumps and Fear Street books under the covers with a flashlight after you were supposed to have gone to bed.

Just don’t go crying to your parents when you have freaky dreams in the middle of the night. It’s your own damn fault.

8. Browsing the horror aisle at the video store.

We didn’t necessarily intend to rent any of the movies there… but there’s no box art like vintage VHS horror movie box art.

9. Making a haunted house in the basement.

Every year, my friends and I used to make a haunted house in one of our basements on Halloween night for trick-or-treaters to go through. I learned later on that “home haunts” can get pretty intense (see: The American Scream ) — but back before we knew what we were doing was an actual thing, it was always pretty gratifying scaring the pants off of everyone we went to school with.

10. Playing The 7th Guest on your ancient PC with the lights off.

My obsession with puzzle-based horror games began with The 7th Guest, and I’m sure I’m not the only one. And hey, guess what? It's been ported to Steam, so for a mere $6, you can go experience it all over again. Another classic? The Are You Afraid of the Dark? game, of course.

11. Psyching yourself out every time your mom sent you into the basement alone on some errand or other.

Maybe you had to retrieve the laundry from the dryer, or maybe you were instructed to bring up a few extra soda cans from the fridge downstairs for an upcoming party… but whatever it was, you made sure you got it done as quickly as possible. Nothing was creepier than being alone in the basement — especially if it was unfinished.

Or somewhere similar. Spookyworld was a New England thing, so if you grew up elsewhere, you probably haven’t heard of it; before high-octane haunted attractions were as big a seasonal fixture as they are now, Spookyworld was where us native New Englanders went for our scare-tastic yuks. You probably had something like it near your hometown, though. It wasn’t Halloween without one.

14. Falling for one of the greatest viral marketing campaigns in history.

What made The Blair Witch Project such a huge success in 1999 wasn’t the film itself — it was the way it was marketed. Fifteen years ago, we hadn’t yet gotten accustomed to viral marketing campaigns being the norm; accordingly, it managed to convince a huge number of people that it had actually happened. And even when we learned it was fiction? Well, let’s just say it was still fun to let yourself get caught up in the whole thing.

The locations used for this short-lived MTV show were very rarely actually haunted; they were, however, spooky as hell, which made the missions and dares its contestants got sent out on the reality TV equivalent of item number 12 on this list.

16. Trying to hypnotize each other during sleepovers.

It never worked, but there was always someone who faked it — often to great effect.

17. Accidentally catching glimpses of Stephen King’s IT when it aired on television.

I don't care if you all float down there — I am not going with you, Pennywise.

18. Calling your friends up and asking them if they like scary movies.

19. Stealing your older sibling’s John Bellairs books, even though they told you they’d terrify you.

I made the mistake of nabbing The Eyes of the Killer Robot out of my brother’s bookshelf when I was maybe seven years old. It became one of my favorite books a few years later — but good gravy, did it freak me out at the time. Anyone else? Bonus points if your editions were the ones illustrated by Edward Gorey.

20. That day in school your teacher dedicated to telling weird and creepy stories.

My sixth grade English teacher spent our Halloween class giving us the best dramatic readings of Edgar Allen Poe stories. I still have a huge soft spot for “The Cask of Amontillado” as a result.

21. Hiding in small, dark places and jumping out at your friends when they least expected it.

Bonus points if you had on one of those horrifying latex monster masks when you did it.