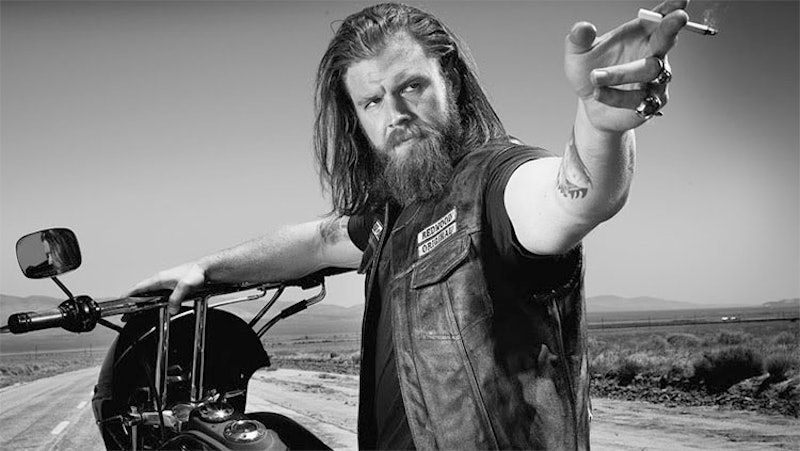 Opie, is that you? Those of you who have yet to fully recover from this particular SAMCRO member's death back in Season 5, will be happy to hear that you'll be reunited with him once more — or, at least, a character that sounds an awfully lot like him. Deadline reports that Sons of Anarchy alum Ryan Hurst will guest star in Bates Motel for its third season. But here's the kicker: he'll be playing the role of character Chick Hogan — the owner of a motorcycle shop in town, who makes his real money by running an illegal firearms business from his property, which just so happens to be right near Dylan’s new farm. (I'm sure that's not going to lead to any trouble or anything.)

But hmm… a gun selling business that masks itself as a motor vehicle establishment. Why does that sound so familiar? Probably because that's pretty much exactly how SAMCRO has run their gun trade in the past. Is this Opie reincarnated? A SOA-Bates Motel crossover we never knew we always wanted? (If he has two kids and gets married to a porn star, then we'll know for sure.) Either way, this has the potential to bring in a whole new audience if enough SOA fans get wind of this, especially now that the FX thriller is in the process of wrapping up its final season.

As of now, Hurst is scheduled to stay on for a total of six episodes, and since guns are involved it's safe to say we should expect even more bloodshed than normal in Norma and Norman's lives. (Mother won't be too pleased about that.) Let's just hope that Hurst's Bates Motel character doesn't meet such a tragic end as poor ole Opie, though I fear that may just be wishful thinking on my part. Because, let's be honest, when guests check-in on this series, they don't always get to check out alive.

We've got your back, Op.