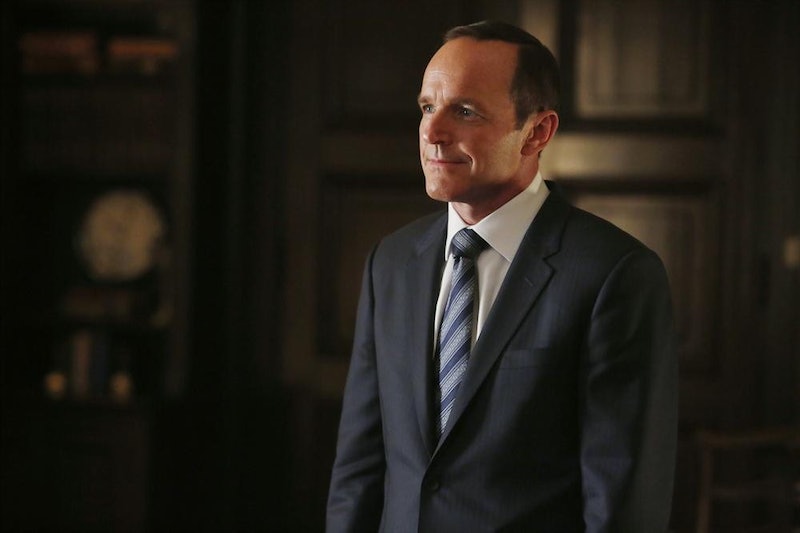 Things are starting to look grim for Agents of S.H.I.E.L.D. fans. Last Tuesday night, Coulson made Melinda May promise to kill him if he starts going "the way of Garrett," which is starting to seem kind of likely with the alien language he keeps compulsively carving. While that was a very sweet scene (and I have been shipping "Philinda" from the start, thank you very much), it is still a scary prospect. Everyone is worried about Coulson, and this raises the stakes considerably. Personally, I don't think he's going to lose his marbles. Remember how the super soldier serum in Captain America worked best on Steve Rogers because he was pure of heart, and turned Hugo Weaving into the Red Skull because he was not? I think a similar concept is at stake here.

We've already seen that this alien drug affected Skye differently than it affected Garret and Coulson. We've already seen that Raina can touch the obelisk when the Absorbing Man and freakin' Xena cannot. Whether it is biology or temperament or a combination of both, I think Phil Coulson is being too modest when he assumes that he's going to go full omniscient loony-tunes. He is a good guy. However, if he does, or if he is being manipulated somehow, this plan is in place. So is Coulson going to die (again)? I'm not convinced. However, I think he is going to need to fake his death and May will have to frame herself for it.

For starters, I'm really into this Snape and Dumbledore thing that Coulson and May have going on right now. While I don't want Phil to sacrifice himself at May's hand, I would love to see them take that Harry Potter metaphor one step further. Grant Ward betrayed the Agents for real, and they could juxtapose that with May pretending to betray them. I think it would be interesting if May, for Coulson's sake, had to make it look like she murdered him and found herself on the run. That would be an excellent midseason cliffhanger. Though I doubt an ABC series would pull a Game of Thrones and kill off such a central character in the second season. I also don't think they would let the audience think that he was dead, because we're not likely to believe that lie twice, and it would remove all of the stakes from the show. Deaths have to stick. They have to be meaningful. However, that doesn't mean the other characters can't think that he's dead.

One of the best choices that Agents of S.H.I.E.L.D. has made in its second season is separating FitzSimmons for a while and keeping Ward in the basement. While it is heartbreaking, it's also helping to develop all of the characters. Season 1 made a big deal about showing how strong the team was together. This season is showing us that they don't need to be physically together in order to be strong. If the team were to gain Simmons and Ward (if Ward is in fact redeemable) only to lose Coulson and May, that would open even more storytelling doors.

Also, the "plan" that May had in place for Coulson needs to be revisited. She had them running away together to the Outback to chill with some kangaroos. That's way too good of a plan not to pay off. That's also way too good of a setting not to see on the show, especially if May or Coulson had to go there alone. Who knows? Maybe Disney has some Qantas miles left over after all the Australian scenes in Saving Mr. Banks.