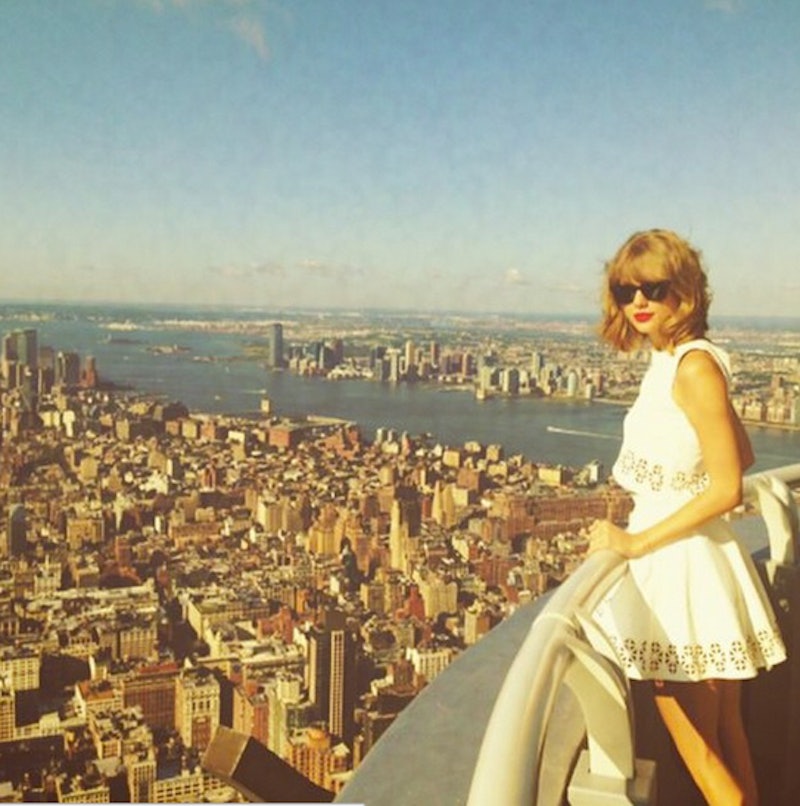 If you have a best friend who is a singer-songwriter, especially a best friend who is a singer-songwriter and is also named Taylor Swift, then it should come as no surprise that she might write a song about you eventually. Remember "Fifteen," in which she name-dropped a friend named Abigail who had a pretty bad time in high school? The first song that Swift released from her upcoming album 1989 was about herself. The second song that she released was about ex-boyfriend Harry Styles. And I highly suspect that Swift's "Welcome to New York" single is about best friend Selena Gomez. The clue is in the interviews.

According to Swift's own introduction to the song, "I dreamt about moving to New York, I obsessed over moving to New York, and then I did it... It’s an electric city. I approached moving there with such wide-eyed optimism and saw it as a place of endless potential and possibilities and you can kind of hear that reflected in this music and in this first song especially." Not only should that make any native New Yorker smug as all hell, but that introduction combined with actually listening to the song should call to mind another interview given in October 2014 not by Swift but by her BFF Gomez.

"Taylor has been begging me to live there,” said Gomez in an interview with E!. "She’s, like, 'It’s the best decision I’ve ever made.'" If that doesn't sound like a single-sentence summary of "Welcome to New York," then I don't know what does. Every lyric from Swift's song practically screams This is the best city ever! Move here! Move here now! I'll pack your bags for you! I imagine that Gomez has been listening to 1989 long before any of us ever even heard about it, so how many times has she listened to "Welcome to New York" and grinned as she imagined her BFF Swifty trying so hard to get her to come to New York that she wrote a whole song about it?

One part of the song sticks out in particular as pretty much everything Gomez should need to make the decision to move in with Swift and have a slumber party in New York every night:

When we first dropped our bags

Put them in a drawer

Everybody here was someone else before

And you can want who you want

I admire anyone who can actually forget this tidbit of celebrity news, but Gomez has an on-off relationship with Justin Bieber that is a source of great derision and confusion from the general public. For every day that the two of them are taking romantic selfies and going on vacation together, there's another day in which they're rumored to be having a fight due to Bieber's equally romantic selfies with a different model every night. Whether we agree with the object of her affections or not, there can be no denying that Gomez has often been suffering from a broken heart in the past few months and there can also be no doubt that she probably feels a little judged in her love life.

However, as Gomez said in an interview with The Talk last Friday, Swift never judges her. And if this song is to be believed, then New York would never judge her either. All I'm saying is, if "Welcome to New York" doesn't convince Gomez to finally move here, then nothing else will. Listen to the song over at Just Jared and get ready to make New York your next, great, real, true love.