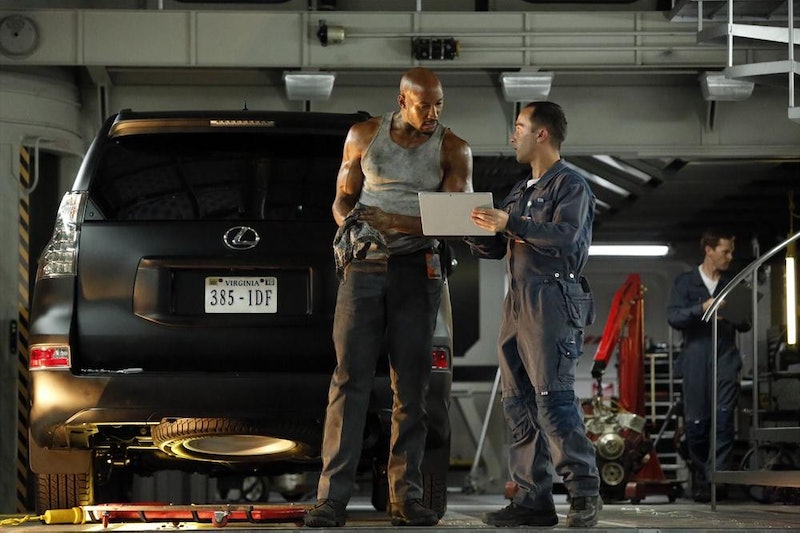 How much did you love the bro-down that happened on last week's Agents of S.H.I.E.L.D. ? (I am, of course, including Skye in that. No gender discrimination here.) The addition of Lance Hunter and Alphonso "Mac" Mackenzie has made for a brighter, bubblier attitude on The Bus, which, in the face of Hydra, is exactly what we needed. Say what you will about Grant Ward, but he just wasn't that fun to kick back with. I loved all the bonding in the episode, and even enjoyed the complaining about exes. I hope these new guys are here to stay, and since Lance is getting more attention right now with his bad boy attitude, I would like to call your attention to Mack, the new mechanic. Who is Alphonso Mackenzie?

You may have been suspicious of this character early on because it looked like he was being brought in to replace our beloved Leo Fitz in engineering. However, his place on the team has been well established by now. The character, played by Henry Simmons (coincidence? I think... so), is no nonsense and honest. He has proven himself to the team in both technical skill and emotional sensitivity. Alphonso Mackenzie is also a comic book character. Though, like the upcoming debut of Bobbi Morse, the details have been changed a bit. Let's talk for a bit about Mack and how great he is for our Agents.

On the ABC series, Mack has proven to be not only an excellent mechanic, but an excellent friend. He's into cars, but awaits Coulon's permission to work on Lola. He's the first person we've seen draw Fitz out of his shell. Mack also revealed, in my favorite scene from last week's episode, that all of his exes are awesome. Save one who made him eat quinoa. He gets along well with Lance Hunter too, as we've seen. They're often joking around and making bets. We don't know much about Mack's history, which is a little unsettling, but I'm sure that's coming. Right now, I'm just happy that someone is able to "reverse engineer" Fitz. The scenes with him and the phantom Simmons are just too depressing! He needs to move on and learn to recover and be strong without her. However based on the Marvel comics, Mack has a lot ahead of him that doesn't involve Fitz.

In the comics, Mack was the C.I.A. liaison to S.H.I.E.L.D. and an agent. Originally from Texas, Mack worked closely with Nick Fury and Jasper Sitwell. He doesn't like aliens all that much and once wrote a tell-all book about S.H.I.E.L.D. and its operations. These are all interesting pieces of information. Sitwell, as you will remember from Captain America: The Winter Soldier, is Hydra in the Marvel Cinematic Universe. I doubt the association means TV's Mack is Hydra, but you never know. He could also be an undercover reporter or even working for the U.S. Government.

But I couldn't stand for another person to get close to Fitz and then betray him. Maybe Mack is working for the C.I.A. in a friendly way? Or perhaps Coulson is going to assign him to enter the C.I.A., and we'll see that arc go the opposite direction that it did in the comics. The most likely thing that the ABC series will draw from the Marvel comics, in my opinion, is Mack's aversion to aliens. He's seemed pretty cheerful so far, so putting him up against something he dislikes will be even more fun. Conflict!

Even though Agents of S.H.I.E.L.D. loves introducing new characters in almost every episode, I hope they save some time to explore Mack as a character. He's a great friend to Fitz and the rest of the team, but has the potential for much more.