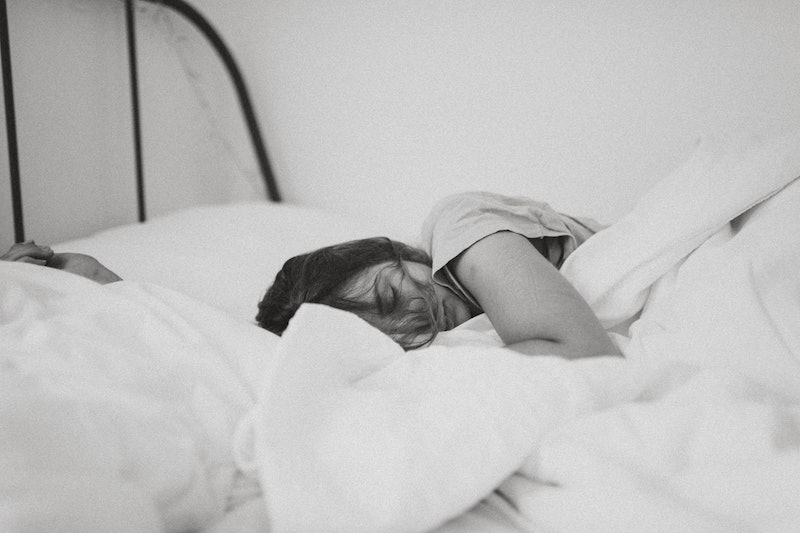 When I first started dating my husband, I knew that sleeping in the same bed would eventually prove to be an issue for us. See, my husband Oliver likes to cuddle, snuggle, and generally use me as his own personal heater all night long. I, on the other hand, can’t stand to be touched when I’m sleeping. It’s just my thing. It has always been my thing, and has been a source of confusion for some of the men I’ve dated, because, according to them, “All women love to cuddle.”

Well, this one doesn't. After Olivier and I have sex, I’ll actually silently count to one hundred before I untangle myself from his clutches and roll away, much to his dismay. Don't get me wrong, I love my husband. But I also like my space — or rather, I LOOOVE my space. Which is why we've started sleeping apart. Yes, I’m only six months into my marriage and I’m sleeping in a different bed than my husband.

See, Olivier snores. Loudly. And as much as I think his beautiful French nose is probably one of his loveliest physical assets, it tends to make unbearable, other-worldly sounds. There’s also the fact that, at least while he's sleeping, he seems to have zero regard for my existence. I can’t even count the number of times I’ve taken an elbow to the boob or the chin. When we sleep together, I wake up shivering because he confiscates all the blankets in his twisting and turning.

He felt we were still too early into our relationship to be acting this way, the "old lovers," do, as he put it. Were we not still crazy about each other? Shouldn't we still be in the stage where we couldn't get enough of each other?

At first, my coping mechanism was pretty much your standard marital passive aggression. I’d purposely go to bed before him, sprawl myself out, and prepare to stand my ground. Although most nights, he’d end up falling asleep on the couch, when he did try to get into bed, he’d get frustrated with trying to move me. Before long, the hints were no longer necessary. He knew what I wanted, and I knew what he wanted. But we couldn’t get on the same page about it.

To Oliver, sleeping separately reminded him of the later part of his parents' marriage, when the love between them had clearly died. They slept in separate rooms then and showed little-to-no affection, so it's no surprise that he equated sleeping separately to a dead love.

I could understand that, but at the same time, my parents sleep separately and are still very much in love. My mother enjoys having her own room, with her own bed in it, and her own space. When she was certain that my sister and I wouldn’t be living home again, she staked out our bedrooms for her own purposes. One is her bedroom, and one is the walk-in closet she always wanted. My father is content to sleep alone, because my mother snores, is a night owl, and doesn’t keep the same hours he does.

When I pointed this out to Olivier, he could see the logistical appeal, but he still wasn’t buying the fact that sleeping alone wasn’t indicative of issues in our relationship.

He felt we were still too early into our relationship to be acting this way, the "old lovers," do, as he put it. Were we not still crazy about each other? Shouldn't we still be in the stage where we couldn't get enough of each other?

We are still in that stage, but, as I pointed out to him, when you're asleep, you're not crazy about anything. You're just a human being trying to get some shut-eye without any disturbances before the sun comes up again. As a man who loves his sleep, Oliver could understand that, and came around to sleeping apart. He has even said, many times, that he now loves sleeping alone, if only to avoid me waking him up every 10 minutes over his snoring.

But as a man who has also been denied his personal human heater, he is still hesitant. In fact, he has even said he prefers we not tell "too many people" about it, as if it's some dark secret we have.

Luckily, he's OK with my writing this essay, and I'm proud of him for it. Because you know what? Sleeping apart needs to be destigmatized. No relationship is without its flaws, but sleeping apart shouldn’t be some secret, certain proof of disfunction. And for us, it is not; it’s a preference that works for us — OK, especially, for me.

I think my grandmother would be appalled to know that I prefer to sleep separate from my husband. But I don't live in the same world she did, or even the same one my parents did. I live in a world and a time where we can acknowledge that space is essential to the health of a longterm relationship. I live in a world where a woman can ask her husband to sleep in a different bed not because he's in the doghouse, but because he simply snores like a dog.

And if you have a problem with that, you can find me in my bed, sleeping soundly.

More like this
The Best Time To Date After A Breakup, According To Experts
By Bustle Editors
The Top Mistakes Scorpios Make In Relationships (& How To Avoid Them)
By Nina Kahn
12 Ways You're Sabotaging Your Love Life
By Teresa Newsome and Lexi Inks
How To Do The Intimacy-Boosting Lotus Sex Position
By Laken Howard and Lexi Inks
Get Even More From Bustle — Sign Up For The Newsletter