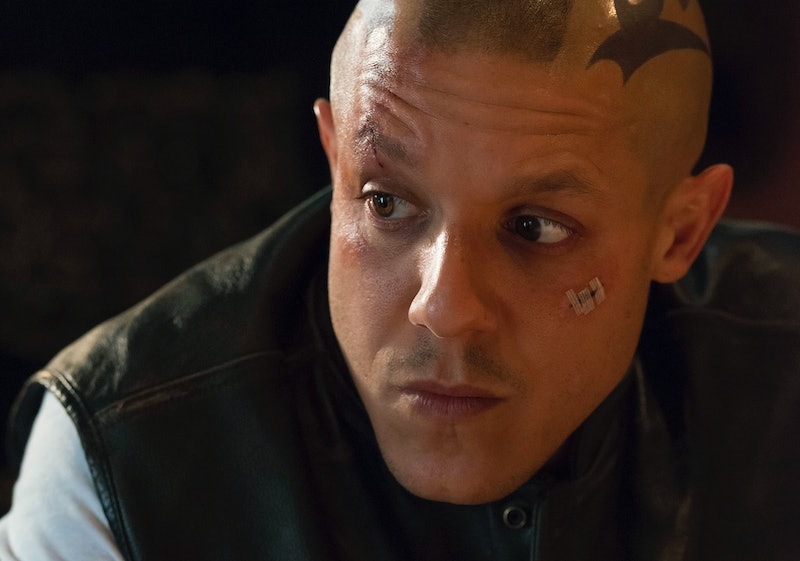 I just don't know what to do with Juice anymore, and it's clear he's not quite so sure either. Heading into Sons Of Anarchy's latest episode, "Greensleeves," Juice Ortiz was almost certainly dead. He'd tried to kill Gemma, he'd attempted to sell club secrets for passage to Mexico, and he was already sitting on a heaping pile of misdeeds. But, SoA is never boring and Juice has always proved to be one of the special characters on this show, so it makes sense that he survived the SAMCRO reunion. Killing him now would be too easy. The problem is that now that he's safe, I'm not quite sure what the hell Juice is doing agreeing to kill Lin for a murder he knows Gemma committed?

At the start of this week's episode, we find Juice being set free with his SAMCRO vest at the site of John Teller's fatal crash. It's a little confusing: why isn't Juice dead? Why does he get to keep his vest? How come he's not rocking large swaths of black tattoo ink to cover up his club marks? We don't find out immediately, but rather watch on in confusion as Juice shoots at cops and gets arrested as two SAMCRO peons watch on from the shadows. Were they supposed to drive him off the road like J.T. or perform some strangely ceremonious White Fang or Old Yeller routine? (If Juice were an animal, he'd be a stupidly loyal dog, OK?)

A few scenes later, we learn the truth: Juice was instructed to get himself locked up so he'd have access to Lin, who was arrested a few episodes. Juice is supposed to earn his way back into the club by killing Tara's fake murderer for Jax. The problem is that Juice knows Lin isn't the murderer. So why didn't Juice just come out with the truth and send Jax after Gemma, the woman he left for dead in the desert just last week?

Well, there are a few reasons.

He Can't Do That To Gemma

Juice is furious with Gemma. He nearly killed her and wasn't exactly leaving her in the most survivable conditions by leaving her alone on the road, miles from anywhere. But the point is that he couldn't pull the trigger himself. He left Gemma's fate up to, well, fate, rather than take action. When it comes to the truth about Gemma coming out, Juice is the same scared boy he was on the side of the road: he can't pull the trigger.

He Saw His Chance To Get Back Into The Club, So He Took It

It killed Juice to not be a part of SAMCRO and the thought that they wanted to kill him was crushing him. If they asked him to walk from Charming to New York on foot without food or water, the poor kid would probably do it. He's not going to question the club or bring about any facts that might change their willingness to let him back in. He's going to snatch the opportunity, no matter how right or wrong it is.

He'd Implicate Himself If He Ratted on Gemma

Let's not forget that he's hiding Gemma's secret, which is yet another way of betraying Jax. If Juice were to tell Jax the truth, sure, Jax would be distracted by the rage and pain that would come with the reveal that Gemma killed Tara, but do you think he'd go easy on Juice or give him the same chance he's getting for assassinating Lin? Hell no. In fact, I'm sure Juice knows that telling Jax would mean there's a chance Jax strikes him down right then and there for keeping the truth from him.

So while Juice seems to be getting a little insane with his latest mission, it might actually the be the sanest thing he's done in a long while.