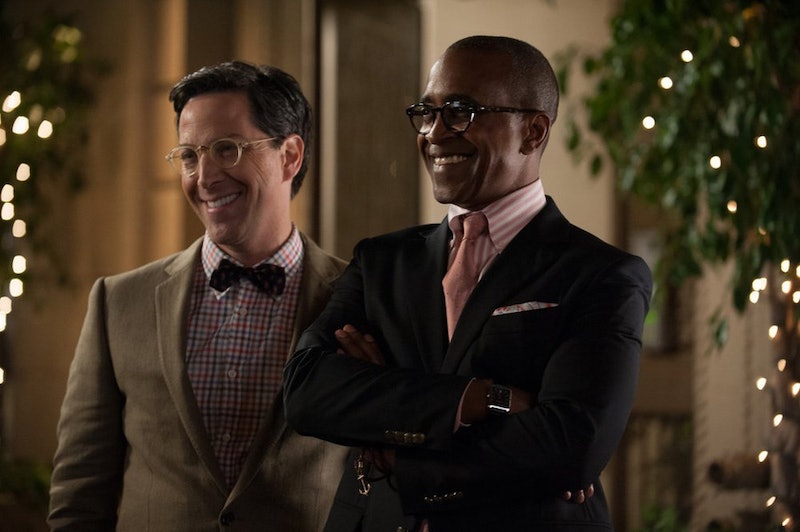 The pilot of Marry Me made it painfully clear that we weren’t working with the most likable main characters imaginable. Despite the kinetic charms of Casey Wilson and the offbeat dynamism of Ken Marino, their roles in the new David Caspe sitcom were far from endearing, bordering a bit too frequently on grating in fact. In the second episode, we’re allowed a bit more time with Annie and Jake’s supporting team: a group that, in functioning as a collection of one-note jokes rooted in easy stereotypes, is not much better.

As Annie struggles with her apprehensions about new fiancé Jake moving into her apartment, she confides in her two gay fathers, played by Tim Meadows and Dan Bucatinsky (and, quite annoyingly, both named Kevin), who serve as a flavorless straight man and a high-strung, fashion-obsessed cliché, respectively.

The casting of Meadows offered promise that at least one of Annie’s dads would be a meaty comic part. Furthermore, while Bucatinsky doesn’t have the established reputation of his onscreen husband, he seems duly capable of handling a joke or two… a good one, not a softball pitch like a crack about his distaste for his daughter’s drapery.

Again, I can’t help but think back on Caspe’s Happy Endings, a show that reveled in its deconstruction of stereotypes. With Adam Pally, the sitcom playfully subverted everything that sitcom tradition expected of its gay leads, making him the antithesis of the bigoted generalization itself while still treating him as a vivid and organic character. But here, we get the opposite treatment: the lazy acquiescence to the tired trope in one Kevin, and, without any original ideas left, a flat and boring non-character in the other.

Annie’s friends are hardly any better. First, we have Tymberlee Hill as Kay, whose limited material in the episode is monopolized by jokes about being black and, less frequently, being a lesbian. With only about three or four minutes of screen time, Kay manages to make and incur around five jokes relating to being a black woman surrounded by white people, a concept that seems to define the character altogether as far as the show is concerned. While her one gag about her sexual orientation isn’t handled with quite as stark an attitude, it still serves primarily to separate her from the rest of the clique as she explains the wacky world of gay Internet dating.

Finally, we have Sarah Wright Olsen’s inscrutably named Dennah, an impossibly youthful and traditionally gorgeous 31-year-old whose focal crisis this week is her obsession with how “old” she looks. Perky, pretty, and blonde, Dennah is relegated to her own demographic’s stereotype, succumbing to an obsession with vanity and opting for highly premature Botox injections.

Without particularly favorable leads in whom to invest our attention, flat supporting characters like these can really suck the life out of a show. If there’s anything less interesting to do with a sitcom character than racial stereotypes and Botox stories, I haven’t seen it… and believe me, I’ve watched a lot of Still Standing.