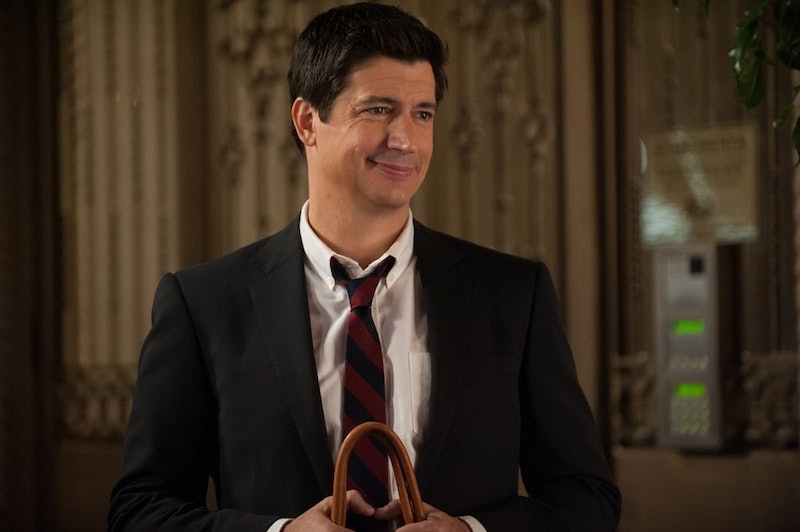 If you're an actor that has been involved in any way with the Adult Swim show Childrens Hospital, you have already won my respect. Opposite Casey Wilson in NBC's new series Marry Me is actor Ken Marino — who not only starred in, but wrote, produced, and directed Childrens Hospital along with creator Rob Corddry. With the résumés both Wilson and Marino have, I'm expecting big things. Marino has been on the TV scene since the early '90s as a part of the sketch comedy show The State , which aired on MTV from 1993-1995 and where he got to yell, "I wanna dip my balls in it!" more than once. Since then, he has taken on roles in programs ranging from Grey's Anatomy to Eastbound & Down. The man has clearly got a diverse palate.

Even though he is going primetime, I can't imagine Marino, who created the Bachelor spoof show Burning Love with his wife Erica Oyama and starred in Bad Milo! (which featured a demon living inside him), would ever play it too safe. And same goes for Wilson. This actually isn't the first time Wilson and Marino have worked together as he dated Penny — and was Dave's therapist — in an episode of Happy Endings. (Which makes a lot of sense since the creator of Happy Endings — who also happens to be Wilson's husband — David Caspe created Marry Me too.)

Marino has a knack for playing a lovable asshole, so before we see him try to get to the altar with Wilson, let's check out how he ended up there:

I will fight anyone who has seen Wet Hot American Summer and does not think it is the most hysterical movie of all time. In it, Marino abandons campers on a rafting trip in order to get some from one of the female camp counselors. It leads to the most ridiculous chase scene in motion picture history with Brooklyn Nine-Nine's Joe Lo Truglio in pursuit.

Marino went from the absolutely eccentric to the more conventional when he joined Dawson's Creek as Professor David Wilder. And of course since it's Dawson's Creek, he had an affair with his "promising" student Miss Joey Potter. I somehow don't remember any of my freshman English professors taking such an inappropriate interest in my personal life, but hey, I guess I'm no Katie Holmes, and my professors weren't as douchetastic as Professor Wilder.

In another teen-friendly turn, Marino was a reoccurring cast member on Veronica Mars. He portrayed the sleazy Vinnie Van Lowe, a private investigator who was always giving Kristen Bell's Veronica some trouble. Marino even returned to Neptune for the Veronica Mars movie. Although he's pretty gross, any man can win me over with a rendition of "Private Eyes" by Hall & Oates (maybe that's not something I should advertise).

He played the jerk stepdad of Christopher Mintz-Plasse's live action role playing character Augie in Role Models. Acting opposite a common costar, Kerri Kenney — who was in The State and Reno 911! with him — Paul Rudd had to give him the smackdown for being an asshole to Augie. (He also played Rudd's brother in Wanderlust — another jerk.)

An amazing gem, Party Down was the outrageous Starz show that was taken away from us too soon. Marino was Ron, the team leader of Party Down catering company, who tried (unsuccessfully) to keep his fellow employees in line. The show also included Adam Scott, Lizzy Caplan, Jane Lynch, Megan Mullally, and Martin Starr, so it's an understatement to say you should check out the two seasons of it.

In the meantime, you can see Marino go the romantic comedy route starting on Tuesday, October 14 in Marry Me. If it's anything like his past roles, it's bound to make me want to do the female equivalent of dip my balls in it.