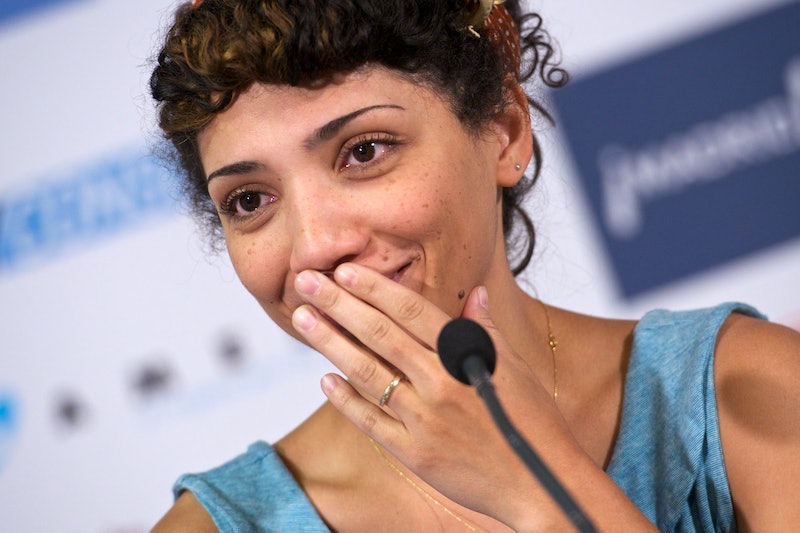 On this week's episode of Scandal, titled "The Key," we'll finally get to see the fallout of Season 3's cliffhanger involving Huck. Last we saw of him that season, he was on the doorstep of his estranged family, after Quinn found their location and shared it with her partner in love and torture (and face-licking). That plot line was frustratingly ignored for the first four episodes of Season 4, but resolution of some kind is just around the corner. How do I know this? Because Scandal guest star Jasika Nicole, who played Huck's ex-wife in one episode each of Seasons 2 and 3, is schedule to reprise her role in "The Key."

This news is exciting on many levels. On one, it's a relief to know that we might finally get some closure surrounding Huck's past. But on another level entirely, it's exciting just because I've been a huge Jasika Nicole fan since her days on FOX's Fringe. That sci-fi show will likely go down in history as one of the most criminally underrated series in television history (imho)... and her role as Astrid Farnsworth is perhaps the most underrated part of an underrated show. Her FBI junior agent was not only scientifically proficient, but she helped ground the eclectic team with her down-to-earth spirit. Her unexpected friendship with Walter Bishop was one of the most touching aspects of the show; it was heartwarming to watch as, over the course of five years, she slowly managed to help the mad scientist reconnect with his humanity, thanks to her seemingly inexhaustible supply of patience.

So what else has Nicole been up to since Fringe wrapped in January 2013, other than Scandal? Not much, actually — at least acting-wise. The only other recent credit on her resume is the recurring guest role as Intern Dana on the podcast Welcome To Night Vale. The podcast is framed as a radio news program hailing from the fictional southwestern town of Night Vale, "where all conspiracy theories [are] real.

But her lack of screen credits doesn't mean that Nicole hasn't been busy. The Alabama native, who came out while filming the 2006 Antonio Banderas dance movie Take The Lead and was featured in Out Magazine's 16th Annual OUT 100 list in 2010, married her partner Claire Savage one year ago, on Oct. 5, 2013.

(When she's not acting or being adorably in love, Nicole is also a very talented illustrator — you can see some of her work here on her website.)

While it's great to see that she's happy in her personal life, I still wish I were seeing more of her on my TV screen. (Does that make me selfish? Eh, probably.) So I'm pumped that she's returning to Scandal. Maybe we'll finally find out what happened when Kim and Huck came face-to-face that made the Gladiator quit OPA and stop speaking to Quinn. And hopefully "The Key" will pave the way for further appearances by Nicole... unless it's revealed that Huck snapped and murdered her, of course. (That'd be pretty dark, even for Shonda Rhimes.)