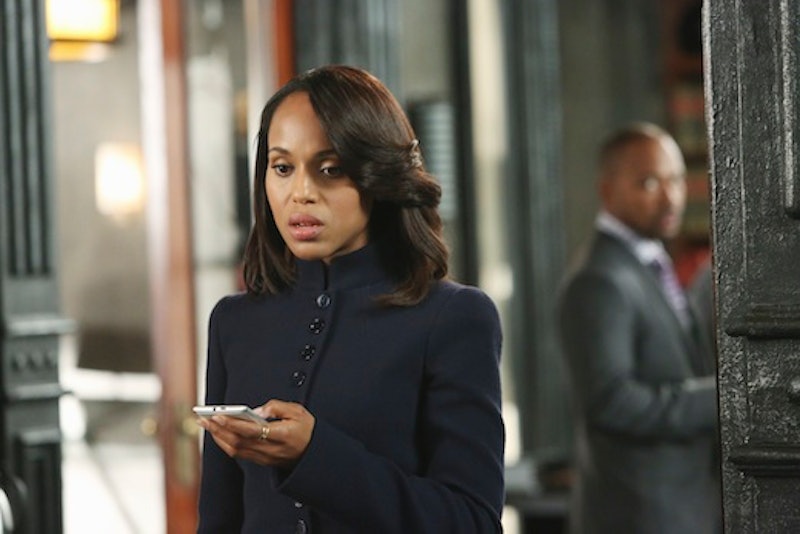 ABC's Scandal has been crazy since Day 1, but Scandal Season 3 set the bar ridiculously high for Shonda Rhimes shenanigans. The über-producer became famous for her typically high body count on Grey's Anatomy, where doctors at Seattle Grace Mercy Death seem to drop dead pretty much every week (or at least have tragic things happen to them like getting cancer or having their legs amputated). But Scandal makes that show look like Sesame Street — it's a wonder anyone made it out of Season 3 alive. As it is, Rhimes racked up quite the body count last year, which raises the stakes dramatically for the premiere of Scandal Season 4.

Exhibit A: The posters for the new Scandal season boldly declare that there's "No Looking Back" for Olivia Pope. Exhibit B: Thanks to the departure of actor Columbus Short (who was arrested for physically assaulting his wife), Season 4 has already claimed its first victim. OPA member Harrison Wright is out. This death of such a central character will hopefully result in a reinvigorated Olivia, who last time we saw her was sailing off into the sunset on a private plane with her man candy, Jake.

With the season premiere right around the corner, it's time to dust off those white hats and gird our gladiator loins for battle once more. But first, a quick recap of the craziest things that happened in Season 3:

Olivia has to "handle" herself.

Season 2 ended with Olivia being "outed" as the President's mistress, and the fixer spent a good chunk of the third season "handling" herself. Olivia's team (with Cyrus' help) get a White House staffer named Jeannine Locke to take the fall as Fitz's paramour... although what Olivia doesn't know is that Fitz is the one who leaked their affair himself.

Another of the President's secrets came to light when the true nature of Operation Remington was finally exposed: many years ago, Fitz shot down a passenger plane over Iceland at the behest of the U.S. government. A whopping 329 people were killed... including Olivia's mother, Maya.

But Mama Pope is still alive.

Oh, but wait — here's Maya, alive and well. Okay, maybe not well. It turns out Olivia's scheming father Rowan has been keeping his wife in a grungy hole in the ground this whole time. Why?

Oops, but she's a terrorist.

Because she's an murderous criminal, that's why. Maya escapes her confinement (by chewing out her own wrists) and goes to her daughter, who helps get her a flight to Hong Kong. Too late, Olivia realizes the truth: her mother was a wanted terrorist, and Fitz was ordered to shoot down that plane after she tricked Rowan into believing she'd planted a bomb on it. Maya kills her entire flight crew and returns to D.C.

The Pope family isn't the only one with secrets. We learn through flashbacks that Fitz's father, Big Jerry, raped his daughter-in-law. Shortly after, Mellie had tried to kill herself, but was saved by family friend Andrew Nichols. Andrew is now the Governor of California, whom Fitz taps to run as his Vice President after Sally betrays him to run for President as an Independent. Mellie and Andrew rekindle their flirtation and begin an affair, but it comes to an end when Fitz finds out. However, when Fitz learns the truth about Mellie's past, he decides to stay with his wife rather than leave her for Olivia.

Quinn and Huck are gross.

Ugh. Do we really have to talk about this one? Fine, let's be brief: Quinn begins a romantic relationship with B613 operative Charlie, who turns her into an assassin. Huck finds out and tortures her for betraying Olivia... and then they lick each other's faces and make out. It's gross. At the end of the season, Quinn gives Huck a file (which she got from Charlie) containing the whereabouts of his estranged family. He rings their doorbell but we don't see the reunion.

Cyrus and Mellie try to discredit Sally as a Presidential nominee by coercing her closeted husband, Daniel, into an affair with Cyrus's husband, James. (Yeah, it's messed up.) When Sally finds out the truth, she kills Daniel in a fit of rage. Cyrus helps her cover up the murder, lest his involvement be discovered.

James becomes suspicious of Daniel's death and helps U.S. attorney David Rosen investigate it. But Jake, who has been promoted to Command of B613, decides he needs to cover up the truth for the sake of the American people. He shoots everyone involved in the investigation — a reporter, an NSA employee, and James — leaving only David alive if he agrees to keep quiet.

Targeting Fitz, Maya plants a bomb in a church where a senator's funeral is being held. However, Cyrus finds out about the plan in time to stall Fitz at the White House long enough for the bomb to go off — Sally is also at the funeral, and Cyrus wants to eliminate the competition. Jake manages to save some lives by evacuating the church just as the bomb goes off... including Sally's, who musses up her face for dramatic effect and helps rescue the wounded, causing her to soar in the polls. Can you say backfire?

In the middle of a rally, Fitz's son Jerry suffers a seizure and is rushed to a hospital, where he's diagnosed with bacterial meningitis. He dies shortly after. It's discovered that Jerry was poisoned, and it's widely assumed that Maya killed the young Grant as retaliation for Fitz escaping death at the church.

Maya is taken out and B613 is reinstated.

Maya's associate Adnan also happens to be Harrison's ex-lover, so when Rowan shows Harrison a picture of a dead Adnan, murdered by Maya, it prompts Harrison to help Rowan track down the terrorist. Rowan informs the president that Maya is dead, and Fitz reinstates B613 (which OPA had just managed to dismantle shortly before).

Tired of all the capital-D Drama, Olivia decides to leave her life as a fixer behind. She accepts her father's offer of helping her start over by boarding a plane with Jake (who sent David all the classified B613 files) and flying off to who-knows-where.

Rowan is an evil genius.

Oh yeah, and it turns out that Papa Pope is pure evil. He poisoned Jerry, not Maya, so that when Rowan brought Maya down, Fitz would thank him by reinstating B613. And he killed Adnan, not Maya, so Harrison would help him find Maya. (And then he killed Harrison, too.) And he didn't kill Maya at all, but simply stuck her in another hole, in true B613 fashion.

Whew! What a whirlwind of wickedness! I am so ready to see how Shonda Rhimes possibly plans to top that season of pure insanity. Because it's going to be crazy.