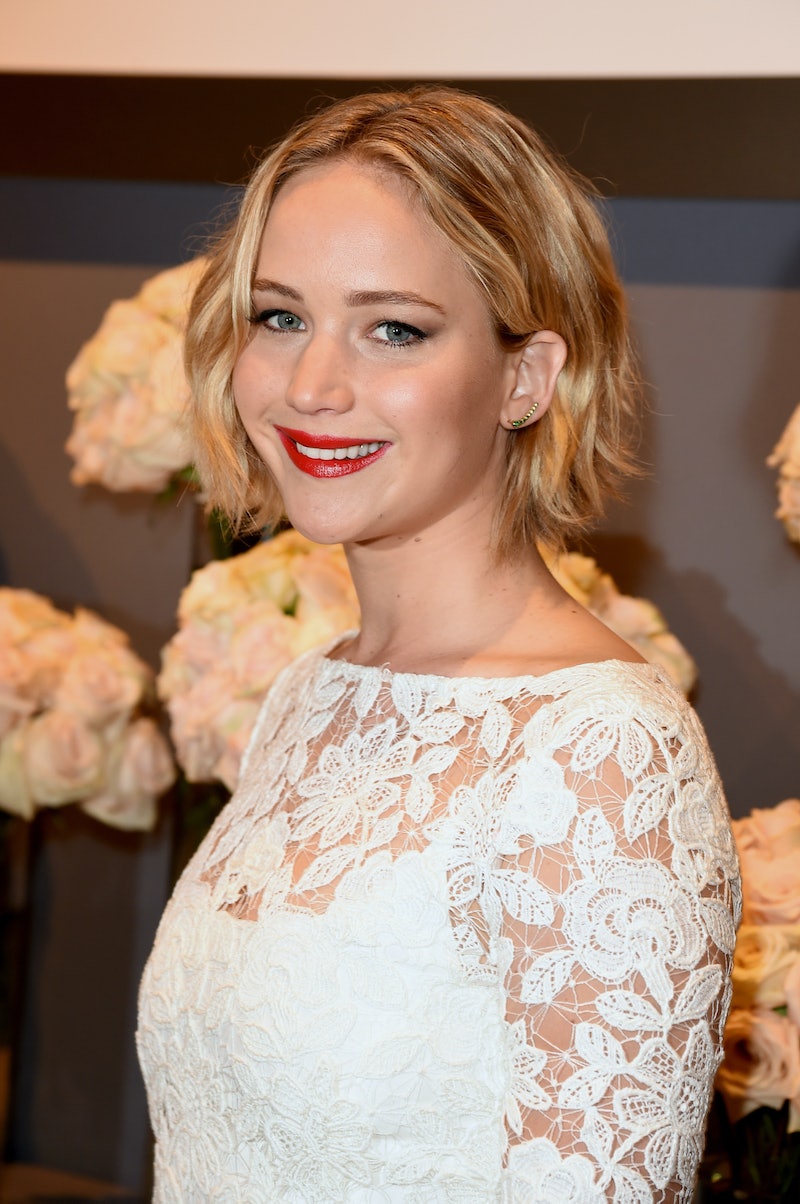 It seems that Jennifer Lawrence, Hunger Games actress and adorkable light of our lives, is all grown up. Jennifer Lawrence just brought a house, a brand spankin' new one which required her to shell over seven figures. And it comes with pretty much all the bells and whistles. Her luxe Los Angeles abode is a modest (hah) 5,550-square feet, and clearly worth the $7 million price tag. Described as having "Hamptons-inspired charm," the five-bedroom bachelorette pad has a bright gourmet kitchen, a gym to make sure she's Katniss ready at all times, a koi pond, and a bangin' swimming pool out back. She won't exactly be roughing it in Hollywood, huh?

It was reported back in April that J. Law bought property in London's posh St. John's Wood neighborhood with then-boyfriend Nicholas Hoult, and his sister Clara even told Hello Magazine that the pair was into feng shui. Unfortunately that arrangement ended once their relationship did. Sadness. But fortunately for Lawrence's new BF, Coldplay frontman Chris Martin, she'll only be a hop, skip and a jump from his Malibu beach house. Think he'll be a fan of the koi pond? It seems like Chris Martin could definitely be into that kind of thing.

Since she's the reigning queen of Hollywood, Lawrence's housewarming party is sure to be the event of the century. How can she possibly have such a magnificent pool out back and not invite Bradley Cooper to take a dip? Come on. Knowing Jen, she's probably pretty busy out and about while promoting her latest movie Serena , so here's a mini guest list I whipped up for her.

The aforementioned actor and frequent J. Law co-star just has to make an appearance. He seems like he can party, you know?

While Cooper is off pouring everyone shots of tequila, the "Welcome To New York" singer can be on hand to pass out organic toasted coconut cookies (as you do). They aren't exactly BFFs, but maybe an invite to her housewarming party is exactly what they need to bury the hatchet.

Supposedly after hanging out at the Oscars in 2013, these two got on super well. She may not be living in London near Adele anymore, but an appearance from the "Rolling In The Deep" singer could liven up any party.

The X-Men: First Class co-stars are already besties, and Kravitz seems like she'd be the perfect party companion. There was no way the daughter of Lenny Kravitz and Lisa Bonet would be anything but cool.