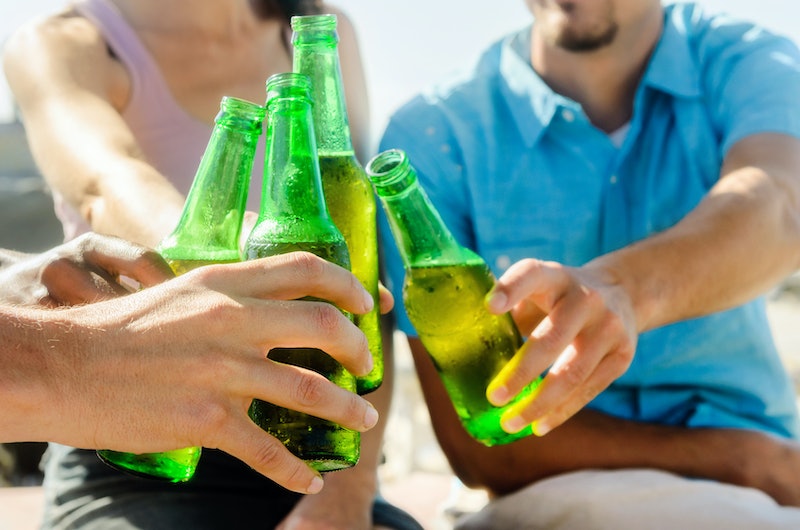 There’s a big difference between what makes for a wine night and what makes for a beer night. A wine night is reserved for more low key plans, perhaps an evening dedicated to introspection, some poetry writing, or digging through that box under your bed that contains the contents of your past relationship. It’s the type of evening in which you have friends over for “girls’ night” even though everyone has to work in the morning. A beer night, on the other hand, is completely different.

A beer night involves more beer than laying low. You don’t just drink one or two beers, even if they’re an extra strong IPA. No, you go into a beer night knowing that the drowsy and relaxed feeling that comes with wine is a distant memory, and that you’re not sure where the night will take you, or how many bars it will involve. Beer creates a different sort of energy in your blood that makes you want to go out and do things, be social. It’s easy to stay home alone and drink an entire bottle of red wine over an evening, but when was the last time you drank an entire six-pack in one sitting? Exactly.

So how does one know what kind of night it’s going to be? Here are 20 scenarios, and what you should drink.

Although you swore to yourself you'd never go the Tinder route, here you are. You don't really see the point on wasting time and cash on wine, when you can get a PBR for $3. You also need those beer goggles, stat.

You want to seem like you have your act together. Not just because your friend told you couldn't drink too much and get sloppy, but because you're finally looking for a serious relationship. You might even sniff the cork after the waiter pours you a glass.

Mean Girls and wine just go together. It's simply not the type of movie or situation that calls for beer. I mean, seriously, WWRGD? She'd drink wine.

Hell, it should be a beer pong night in an ideal world. Damn the man. Damn that job. You're hitting up the bar and drinking whatever pale ale they have on tap, and you're going to be late to work again. Screw 'em.

YOU FEEL LIKE STAYING IN AND REORGANIZING YOUR APARTMENT

It just feels like the kind of night where things need to be shifted. You want to weed out your closet, downsize your shoe collection, and finally put up some proper artwork. You also get to drink from the bottle.

You know, for a fact, that if you consume the entire bottle before midnight and follow it with lots of water, you will absolutely have your project done on time. You're practically a pro at wine-drinking and reaching deadlines, and tonight will be no different.

YOU HAVE A THREE-DAY WEEKEND

Three-day weekends usually mean holidays, and holidays mean cookouts, which, of course, means beer. How else does one properly celebrate an American holiday? It would be uncivilized to opt for wine on such an occasion.

YOU’RE SEEING YOUR FAVORITE BAND AT A DIVE BAR

The first rule of going into a dive bar is that you just don't order wine. For starters, they only have one red and one white, and since the last time that bottle was opened was for someone who had never been to a dive bar and didn't know this rule, you're going to be walking straight into a vinegar situation. No one wants vinegar in their belly when they're dancing around and trying to seduce the lead singer into their clutches.

It's like being in the kitchen and standing over a stove just calls for wine. You're putting it in the dish you're preparing, you're pouring glasses for your friends, and you're having one of those nights that just makes you feel like a grown up.

YOU JUST FOUND OUT YOUR SISTER IS PREGNANT. AGAIN.

Oh, yeah! Go her! No, you're not worried about your eggs! Women are still making the babies into their late 40s! It's cool! Totally. Effing. Cool.

If you've ever been to Amsterdam, you will know that, aside from their awesome "coffee" shops, they are a haven for proper gouda and beer. You can't eat gouda without beer, and since you did just drop $25 on this half pound of glory, only beer will do. You so fancy.

YOUR FIRST STORY WAS ACCEPTED BY THE NEW YORKER

And to quote Carrie Bradshaw, "What do winners order?" Well, I'll tell you: wine. The expensive stuff. The stuff you can't even pronounce and probably can't afford just yet, but you're quite certain that you're going to get your book deal, finally, out of this winning moment.

YOU JUST GOT YOUR STUDENT LOAN BILL after months of deferment

Is it even possibly that interest can add up to THAT much? Is this even legal? Looks like you need a drink, and it's certainly not going to cost more than five bucks.

IT'S HAPPY HOUR WITH YOUR WORK 'FRIENDS'

The goal here is to pace yourself and not have too much to drink. You know that you tend to drink beer faster, because who likes a warm beer? And you really don't want to lose control and tell Marsha your thoughts on her accounting ability to her face.

IT'S happy hour with your real friends

There's nothing like sitting back with your friends and having a couple of cold ones while you complain about Marsha in accounting once again messing up the paychecks. Marsha is a good person, even funny, too, but, man, does she ever force you to drink. And since you don't have your paycheck, you're forced to drink the cheap stuff, too.

YOUR FRIEND WITH BENEFITS IS COMING OVER ... 'TO WATCH A MOVIE'

Watching a movie is, of course, a euphemism. However, it's more fun to hide behind the movie and a couple beers and pretend you don't know how the evening will end. Or how you'll both swear it's the last time in the morning.

YOUR BFF WAS JUST DUMPED BY THE JERK YOU NEVER TRUSTED

You find it's much easier to refrain from doing the "I Told You So" dance when you drink wine. Besides, she's hurting and wine has a lovely numbing effect to it.

YOU'RE HAVING SOME MUCH NEEDED Alone TIME

You're exhausted. You just want a night alone where you can wear your pearls and your underwear, and think about life. Only wine will do. You even splurge for the top shelf stuff, forcing your wine store dude to question if you've won the lottery. And you have: You're going to be sans pants and people all night.

Is this a joke? Are you on some weird candid camera show? Are you being punked? Where's the vodka? Someone get the vodka!

More like this
Amanda Seyfried Says She Felt Pressured To Shoot Nude Scenes At 19 Years Old
By Jake Viswanath
I Tried The $20 TikTok Viral Oishii Strawberries — Here's What I Thought
By Sophie Hanson
Trust Me, Pickle Martinis Are The New It Drink Of The Season
By Emma Carey
The 8 Best Chew Bones For Puppies, According To A Vet
By Andrea Hannah
Get Even More From Bustle — Sign Up For The Newsletter