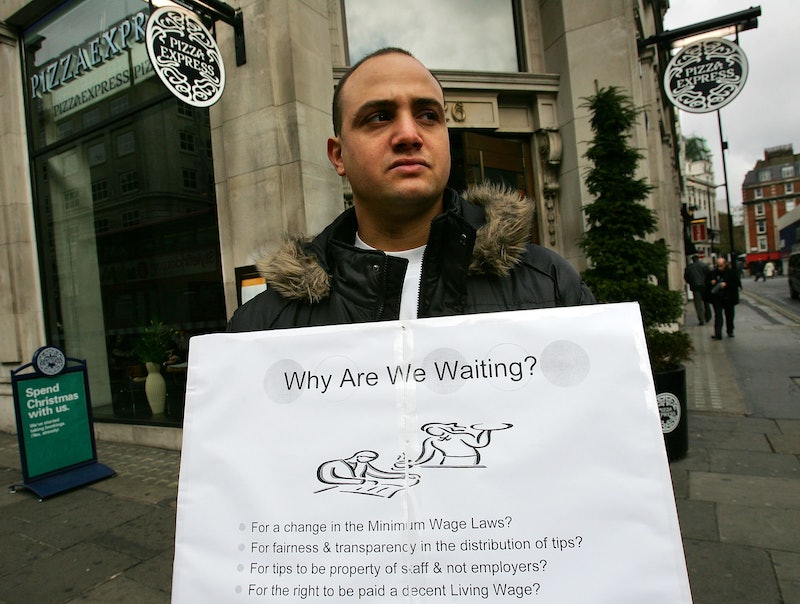 Minimum wage is all the rage — as a political talking point. As the White House plans to raise the federal minimum wage to $10.10 an hour, the debate remains a strong issue. On Tuesday, New Jersey Governor Chris Christie sparked fury over his comments at a U.S. Chamber of Commerce conference — that he's "tired of hearing about the minimum wage." Known for his controversial and sometimes questionable behavior (though probably no one could reach Rob Ford-status), the governor added:

I don't think there's a mother or a father sitting around the kitchen table tonight in America saying, "You know, honey, if our son or daughter could just make a higher minimum wage, my God, all of our dreams would be realized." Is that what parents aspire to for our children? They aspire to a greater, growing America, where their children have the ability to make much more money and have much great success than they have, and that's not about a higher minimum wage.

Democrats pounced on the remark immediately, and White House Press Secretary Josh Earnest even said on a briefing the day after Christie's golden soundbite that those living on the minimum wage are the ones who are really tired. Touche.

In all fairness, Christie's point that nobody aspires to earn the minimum wage is probably valid. But what the governor fails to understand is the reality that many Americans do earn the minimum wage, in spite of their aspirations. More than half of minimum wage workers are over 25 — which shatters the assumption that minimum wage jobs are for teenagers looking to earn some money — and about two-thirds of them are women.

As the debate rages on, I've compiled a list of your other (potential) future presidential candidates and what his or her thoughts on the minimum wage are:

Today a person can work full time at a minimum wage job and still live in poverty, and I think that's just fundamentally wrong.

The Democratic senator said the above in an appearance on The Late Show with David Letterman last year. This week, while campaigning for Rep. Bruce Braley in Iowa, she told audiences of the minimum wage job that her mother held to sustain the family when she was a child.

Warren has stated that, had the minimum wage grown at the same rate as productivity, those earning the lowest hourly wage would be raking in $22/hr. Warren also made the case for raising the minimum wage in an Op-Ed article, citing less government assistance, higher spending power and a boon to small businesses.

The discussion before this chamber is whether to raise the minimum wage to $10.10 an hour... Far better than the promise of $10.10 an hour, is $46.98 – the wage Americans can earn in the oil and gas industry.

Wait, what? If you did a double-take, let me give you some context — the Texan Republican said in a speech introducing his American Energy Renaissance Act that aimed to replace "job-killing" minimum wage legislation. That's right: Cruz declared that minimum wage legislation would cost the economy 500,000 jobs, a figure lauded in a Congressional Budget Office report.

The study, based on information from other existing studies, gave more weight to experiments whose credibility some economists questioned. Overall, said economists declared that the benefits of raising the minimum wage far outweigh its possible downsides.

Back in August, the senator's dad, in an effort to persuade people to vote Republican, said that black people "need to be educated," and cited a book by journalist Jason Riley, who is black, about "how all the handouts to blacks have kept blacks in the poorhouse."

That's right. The Republican senator isn't in favor of the minimum wage — at all. Instead, Rubio said that helping the private sector would be more effective. So he doesn't want a government-imposed minimum wage law because corporations will pay their employees what they're due? Really? Help me understand this here.

Now in our own country, women hold two-thirds of all minimum wage jobs. And that's bad enough, because if you work full time on a minimum wage job and you have a family of three, you are still below the poverty line... Without equal pay, without flexibility or predictability at work, without access to quality, affordable child care, or without the ability to take a day off if your child or aging parent is sick, without paid family and medical leave, this woman is really on the brink.

Although she hasn't declared her run for presidency, people really, really, want her to. Matt Yglesias at Vox wrote that the former Secretary of State repeatedly used feminism to frame her talking points during a panel with all-female speakers. Being the first woman to come close to holding the most powerful office in the world, Clinton has certainly been a champion of sorts for fellow women who struggle for inequality.

Should the minimum wage hike pass the approval of a highly partisan Congress, the benefits are numerous, especially for women, who make up more than 64 percent of minimum wage workers. A Think Progress chart from 2012 noted that 60 percent of women are primary or co-breadwinners in the family. A higher minimum wage would mean more money for the family — for food, books, clothes, school, you name it — and benefit 17 million women: 8.9 million would receive direct benefits, and another 4.2 million from the "spillover effects" of maintaining the wage structure in an organization.

But there is still a lot to be done, what with the GOP refusing to budge on the minimum wage, and their "usual reactionary rhetoric," as Jamelle Bouie at Slate put it.

Perhaps former first lady Clinton put it best, when talking about why the minimum wage debate is so important to women: "We talk about a glass ceiling – these women don’t even have a secure floor under them."

More like this
A Political Thriller Inspired By The Munich Massacre Is Coming Soon
By Darshita Goyal
Why Eurovision 2023's Host City Won’t Be Revealed For A While Yet
By Sam Ramsden and Rachel Mantock
Are John Legend & Kanye West Still Friends? The Singer’s Latest Update Is Candid
By Brad Witter
Which Cast Member of 'Westworld' Season 4 Has the Highest Net Worth?
By Meg Walters
Get Even More From Bustle — Sign Up For The Newsletter