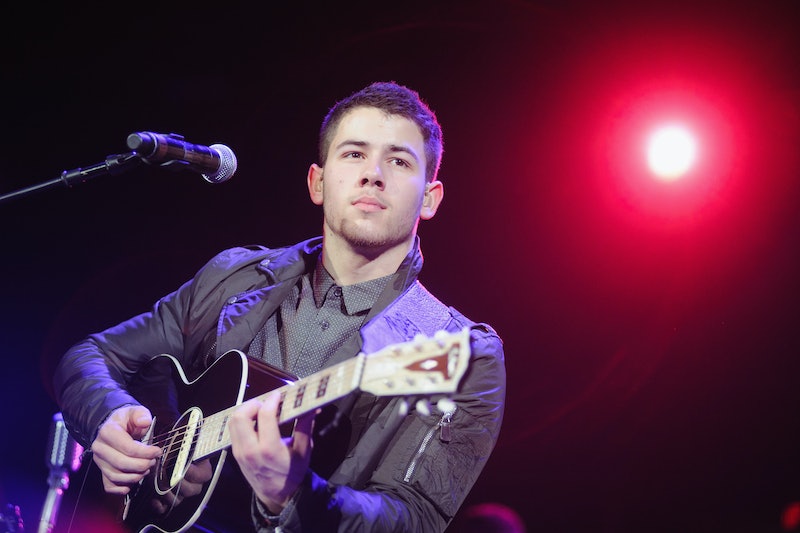 We have come a long way baby since the days of the Nick Jonas purity ring. In a totally cringe-worthy interview with Sugar Scape, Nick Jonas is made to look at pictures of celebrity bulges and guess who's junk he's looking at. When I was a young woman casually making a t-shirt to wear to a Jonas Brothers concert during in high school, I never in my life thought I would be discussing bulges and Nick Jonas together in the same sentence on the Internet. But here we are. We now live in a world where it's totally acceptable to suffer extreme second-hand embarrassment while watching Jonas identify celebrity bulges. What a world!

In the video, Jonas is just chilling in what is probably a green room, but what looks like a random living room and is handed some pictures of celeb's crotches and asked to guess who he's looking at... because that's apparently a normal thing to do now. And how can interviewers resist, after Jonas himself has thrust his own bulge into the spotlight? You may recall an interesting photo shoot in Flaunt Magazine where a shirtless Jonas grabs his own bulge and caused an Internet melt-down of hilariously epic proportions.

Nick Jonas, I've been to the year 2014, and not much has changed except I've seen you grab your bulge in a magazine. In the video, Jonas quickly identifies his own bulge first — which we could all probably do at this point — but then struggles a bit with the others. Which makes sense, since he's pretty busy working on promoting his second solo album, Nick Jonas, and his new TV show Kingdom. It makes sense that most of these bulges would escape his attention even though he could've practiced with this gem of a Buzzfeed quiz. However, he does correctly guess which bulge belongs to Justin Bieber with some epic shade throwing:

This looks ridiculous. It's Justin. That's the plain giveaway. Only one person in the world would look that ridiculous.