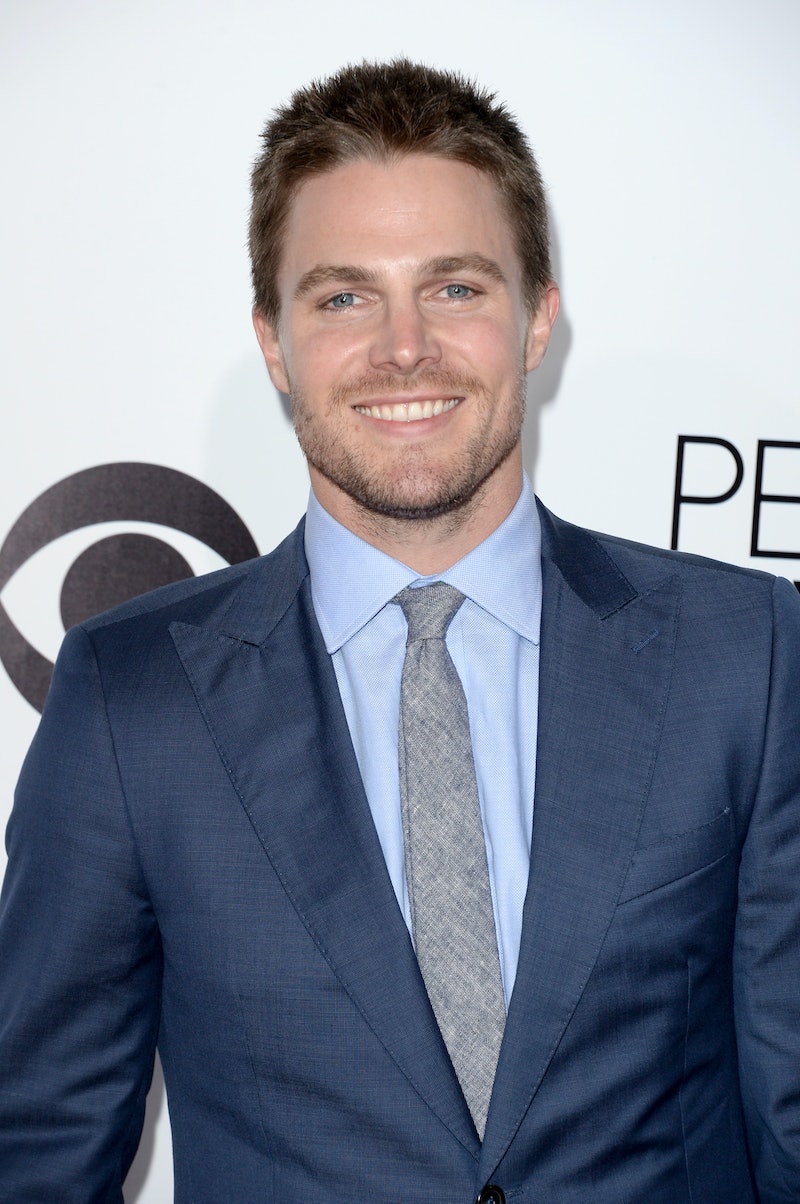 Update: Stephen Amell clarified on his Facebook page that he has not personally received any negativity on Twitter and thanked Zap2It for updating their story. The actor wrote, "I personally haven't encountered anything negative on Twitter. People I know have. And I think Twitter does a horrendous job of protecting those folks. When they have a better policy, maybe I'll go back. The part where I compared social media platforms to N'Sync? That was accurate."

Yes, he's known for playing the handsome, badass, beloved Oliver Queen on The CW's Arrow, who can do the salmon ladder like no other, but Stephen Amell's also embraced for loving his Facebook fans and dedicating a bulk of his time raising cancer awareness. For those of us who keep tabs on Amell (no, we're not stalkers, we just care), we know he shares more on Facebook, rather than spending his time tweeting it up on Twitter. Well, now we know why thanks to a new interview with Zap2It where Amell revealed he thinks Twitter is negative and Facebook is positive.

During a group chat with reporters who visited the set of Arrow, Amell opened up that he's not happy with the cutthroat world of Twitter — at least not with the hate he's receiving. "As happy as I am right now with Facebook, I think I'm done with Twitter. Twitter feels like a fad to me and I've been really disappointed by just the level of vitriol." He continued, "I don't know if that's a byproduct of the anonymity there, but when you're sorta scrolling through looking at Twitter reactions to the show, they exist at the edge of each spectrum. They're incredibly negative towards some characters. They're overwhelmingly positive towards others ... I don't think Twitter's important."

For those who need a simpler, pop culture explanation, here's how Amell put it: "Think of social media like 'N Sync. I think that Facebook is Timberlake, OK? And I think that all of the other forums are the other members of the group." As for Twitter: "The one whose name I can't remember." To Amell, Facebook is a safe place (for now), where the actor can have fun with his fans and actually interact with those who care. He said, "On the Facebook side, connecting with the fans in that way I think holds a lot more value, holds a lot more sway and it's just been fun. I'm the same person as I was before I got this job, but this job has given me the platform to have fun and do interesting things on Facebook."

Like Amell, Supernatural actress Felicia Day and model Chrissy Teigen have received a lot of backlash via their social networks, recently. This all just goes to show that no one should have to put up with such toxicity, and it makes complete sense why Amell wants to stay in the white light, rather than crossing over to the dark side.

Whether it's Twitter or Facebook or Tumblr or Instagram, we all know what it's like to have haters. The Internet is a cruel place, especially now that we have so many outlets where anyone and everyone can hit you where it hurts. As any journalist knows, including myself, we all "adore" that dreaded comment section after each of our articles. Overall, people can be straight up mean. I 100 percent see where Amell is coming from, but I don't plan on quitting Twitter anytime soon. My mind might change if I become a famous star, or if I start getting toxic replies. Until then, I'll keep up with my hourly Twitter-binge. With all that said, we can learn from Amell and start using social media in a fun, positive way, rather than slamming people we don't agree with.