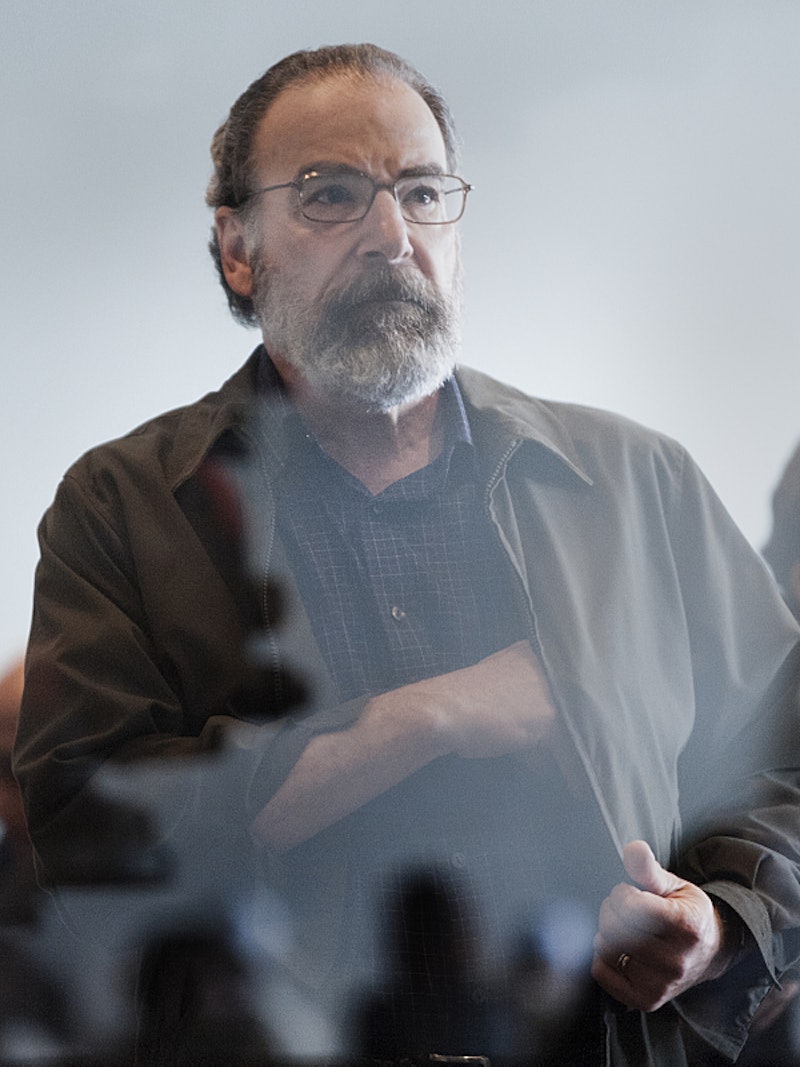 Homeland, how dare you put Mandy Patinkin in danger? Sunday's episode of Homeland featured a welcome Saul storyline — though much less welcome was the fact that he ended up bound and gagged in the trunk of an ancient Peugeot. Last week, Saul made it clear that he was no friend of the ISI — remember when he met with lieutenant-colonel Aasar Khan (Raza Jaffrey) and pretty much point-blank accused them of killing Sandy Bachman? Yeah, that didn't exactly make him any friends. In fact, when we got our very first glimpse at an ISI meeting, it quickly became clear that Saul was going to get "taken care of," which is never exactly a good thing on Homeland.

The way they pulled it off was pretty ingenious, too. Saul's no easy catch (if we're using fishing metaphors, he's easily a blue marlin). Yep, they used Farhad Ghazi — the same man who helped conduct Sandy's death-symphony and who threatened Aayan not to talk to the media — as bait. What Saul thought was just about the luckiest airport encounter ever, turned out to be the un-luckiest, because all the while he was gleefully coordinating a trap to scoop Ghazi up in South Africa, a team of operatives was lying in wait. They stuck him in the neck with a sedative and wheeled him out of the airport under the guise of a sleepy old man (by the way, I would never buy Patinkin as a dozed-off grandpa. How undignified).

Unfortunately, it gets even worse — Fara and Quinn happened to catch some ISI members on the move during a surveillance operation, and managed to tail them. Fara (who's still finding her footing out in the field) was literally feet away from sticking a tracker on the very car that Saul was trussed up in, before she got deterred. Add that to the fact that Carrie was too busy "recruiting" Aayan to pick up her phone to order a drone to follow his car, and you've got yourself a very frustrating series of events: All our favorite CIA peeps literally let Saul slip through their fingers.

And here's the scariest thing yet: No one even knows he's missing. When Quinn goes to Carrie the next morning to yell at her for sleeping with Aayan, he tells her that Saul's on the plane home (I guess that's just another genius facet of the ISI's airport capture). How long will the ISI have him before they even notice he's gone? As of right now, I'm feeling pretty confident that he'll make it out alive (I'm pretty sure we would have gotten heavy foreshadowing if he was going to die), but at what cost? Will they try to turn him into a mole? Torture him for intel?