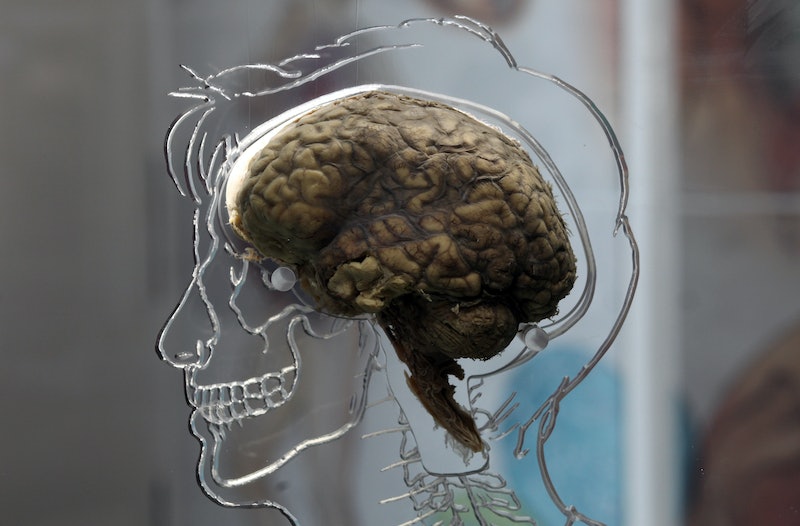 Have you ever just wanted to shake off a bad mood, ASAP? Want to instantly ease that ball of anxiety that seems to live in your stomach? Well, welcome to the future, my friend, because there's a new product that claims it can help us do just that. A startup company called Thync is releasing a device that can alter your mood and change the way your mind and body feel, the Daily Dot reports. It basically strives to achieve the same sensations you get from coffee, wine, and other mood-stimulating substances without the side effects of jitters, hangovers, or brain damage. Though the company hasn't released the design specs of the device, it is known that it will be worn on the head and controlled using an app on your smartphone. We also know that the intended release date is 2015, and that the company has $13 million to research and execute this project.

So how exactly does this strange contraption work, you ask? The algorithm that's used is called neurosignaling, which targets the naturally occurring sensory fibers in your brain, and the sensory fibers of your cranial nerves in order to shift or enhance your mood. Basically, it will provide electric stimulation waveforms to alter your brainwaves and help you achieve new moods, like feeling more energetic, calm, or focused. These methods are known to the non-scientific community as "magic."

While there is a bit of an eerie New World/mind control/Big Brother feel to all of this, this piece of technology seems like it could lead to some really exciting things, both recreationally and otherwise. For instance, by stimulating parts of our brains to make us feel calm, the device could have the potential to possibly reduce feelings of stress (which is good, considering all of the health risks that come with it). That being said, the Daily Dot reports that the company currently "is not making any medical claims," although it is working with the U.S. Food and Drug Administration to see how the product might be regulated.

This isn't the first device on the market that claims to be able to change the way you feel, however. Mood tech is becoming a new point of fascination for scientists, who are experimenting with innovations ranging from music players that pick out songs based on your mood to mood-improving headsets that sense stress

Regardless of how effective Thync's product is, I can say one thing is certain — provided that it's affordable and not too absurd looking, if I ever get my hands on this gadget I will definitely be trying it out under the "chill" setting.