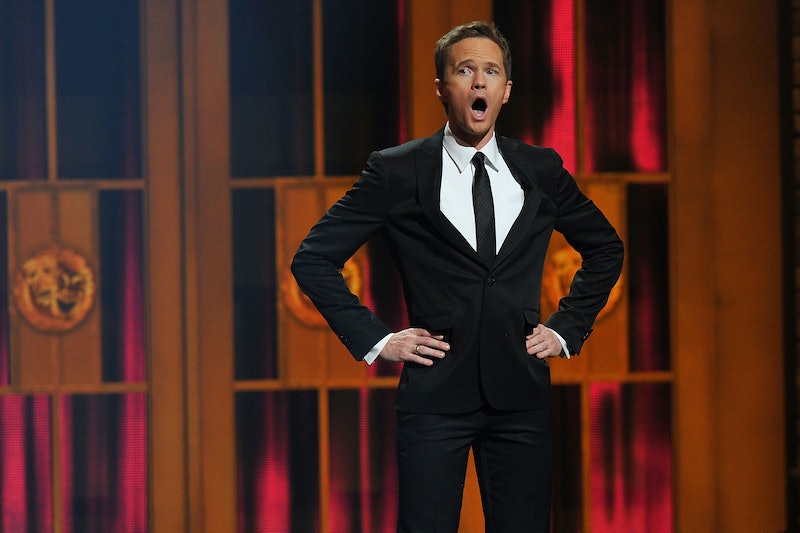 Neil Patrick Harris' creatively titled Choose Your Own Autobiography is out, and it is oh-so-good. The book is styled after the popular Choose Your Own Adventure series of the '80s and '90s, and there are plenty of great adventures that happen in its 300 pages. (Acid trips! Gay adventures in Berlin! Ghosts in Scotland! Quicksand! Lots of things that need exclamation points — trust me on this one!) And while some of the hilarious book endings may be false — and you can always turn back to the page from which you came — all of NPH's life stories are real, honest, funny, and often surprising. And the surprises are the best part.

Interested in his first gay experience? In what drugs he's taken? In that one time he saw Josh Radnor naked (and it was before How I Met Your Mother started filming)? See, surprises abound. I'll spill some of the goods for you, curious souls. But I promise that once you read what's below, you'll want to pick up your own copy of Choose Your Own Autobiography for more adventure, more insight, and much more filth from our next Oscar host.

Did you know any of these following NPH surprises?

He lost his hetero virginity at 16

Harris calls it a "squalid, four minute limp-dicked affair," which only happened because the girl's friend had "dared her to sleep with Doogie." "Given the quality of performance, the dare could not have possibly been worth it," he says.

He had a drug phase

In his early 20s, post-Doogie, Harris moved to a rural town in New Mexico and "experimented" with psychedelics. After one particular acid trip, Harris says, "the only thing you remember is staring at a weeping willow tree in front of your house and watching the leaves turn into frogs and one of the frogs turning his head and shrugging as if to say, 'Yep, a tree filled with frogs. What are you gonna do?'" Harris also admits that taking LSD is neither transcendent nor horrific, just kinda weird.

His first gay experience was at 24...

Harris was staring in the first national tour of Rent (as Mark, of course), and remarks that with Rent, and all the "explosive movements and writhing gestures" of the show, he couldn't help but start feeling "sexperimental." So when a fellow cast member invites Harris over for a massage, "he starts rubbing you, and whoops, his hand wanders, and whoops, your hips rotate, and hey, look what the two of you find yourselves doing just because it happened to happen this way."

...And He felt ashamed immediately after

"You're supposed to be thinking, of course, now it all makes sense! This feels so right!" Harris says about the experience with the Rent cast member. "But that's not what you're actually feeling. Any chance of surrendering to and enjoying the moment is cut off by the constant internal monologue: No one can know, you can't tell anyone, this can't happen again, but what if it does.."

Harris recounts an especially scary vacation with David in Costa Rica, camping outside while very drunk and very high, when David simply walks right off the edge of a 200-foot-high cliff. "You are pretty sure he's dead. The guides are sure he is dead. And against all laws of motion and thermodynamics, you find him on the railroad ties that guard the edge of the cliff. The worst thing that's happened to him is he's lost a flip flop, the lucky son of a bitch." Lucky, indeed!

Right before shooting the HIMYM pilot, Harris starred in The Paris Letter, a play that required full-frontal nudity. "You are required to be naked onstage with another man, to make out with him, and seduce him. You are terrified, which is the main reason you do it." Little did Harris know that his object of desire, a young Josh Radnor, would go on to be his How I Met Your Mother costar for nine years!

Barney and Robin's love story was all his idea

Barney Stinson was meant to be a very different character, Harris admits. More of a beer belly, broad chested kind of guy, but when Harris was offered the role, he helped reshape Barney's identity and many future storylines. "Robin was the potential mother in the pilot ... but I loved Robin. I don't mean Barney, I mean me, Neil. I loved that she was a tough, cigar-smoking broad. That struck me as something Barney would dig. So Barney started giving Robin extra-long looks in the bar in hopes the writers would 'do something with it.'" The rest is history!

His daughter, Harper, stopped breathing immediately after she was born

Harris recalls the panic and chaos and running from one machine to another, but thankfully, 45 seconds later, Harper began breathing (and crying). "You will never forget the emotional vertigo of that moment," Harris says. Also: Why the names Gideon and Harper for his children? "You want names that won't automatically leave other people with the impression of who they are or what they're like. They are both names that, to your ears, don't come with any kind of stereotype," Harris says.