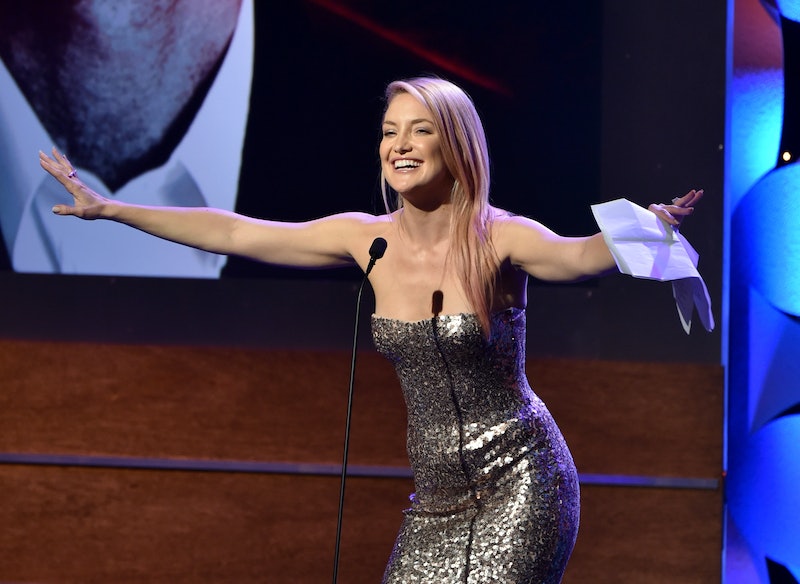 As the McConaissance continues, the man in question was recently honored at the American Cinematheque Gala and one of his former romance movie buddies introduced him. But in doing so, Kate Hudson whipped out her amazing Matthew McConaughey impression and it was perfect. There's no denying that the Texas-born actor is pretty fun to imitate. Everyone from Brody Jenner to Channing Tatum has tried to copy McConaughey's famous drawl.

But perhaps most successful at nailing the impression is Kate Hudson because she had his character down pat. During her speech she took us back to when she and McConaughey were filming Fool's Gold together. Hudson had been having a rough day between her divorce finalizing and her fear of getting into the ocean, and along came McConaughey to save the day.

"Out of the water pops Matthew — no shirt, full gear, spits out the regulator," Hudson says imitating the actor. Then she spread her arms wide and got completely into character. She captured his voice, mannerisms, and all to explain what McConaughey said to her to get her in the water. "Come on Hudson. Let's go baby. Uh huh. It's like 1969 down there baby. It's Woodstock, man."

Hudson nailed the line, but the best part was that her impression wasn't stereotypical McConaughey. She didn't go for the predictable "alright, alright, alright" so her impersonation feels more personal and genuine. Also can I just say I miss them in movies together? Let's hope he returns to romcoms someday because these two were quite the dream team.