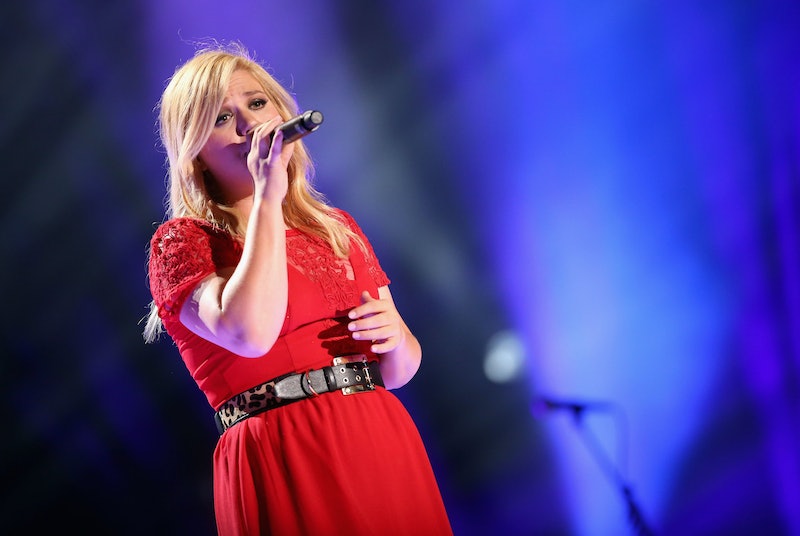 At this point, everyone knows that Kelly Clarkson is the queen of song covers. The former American Idol star has revealed that much to us through the many YouTube videos her fans have captured of her singing songs we all know and love. From Justin Timberlake to Sam Smith, her renditions always sound impeccable and it's like they were meant just for her. And thankfully, it doesn't look like she's going to stop anytime soon. While you probably thought her cover of Smith’s Stay With Me was beautiful, you’ll definitely leap for joy when you hear that Kelly Clarkson has covered Taylor Swift’s "Shake It Off".

Telling the audience at one of her shows that it’s one of her favorite songs out right now and that she’s going to “bring a little Jesus into tonight,” referencing her soulful take on Swift’s hit, Clarkson’s cover is breathtaking and completely different. When people cover songs, they usually put their own twist on it — some less dramatic than others — but Clarkson went all out with this one truly making it her own to the point that it was almost unrecognizable had it not been for the lyrics.

Rather than attending a pop concert, the audience was treated to something a little more intimate on Friday, with Clarkson going a little more gospel and on us with some church vibes. At first Clarkson started off slow, but the song later picks up with that fast-pace, upbeat feel most people are used to hearing from the original song.

Even Swift herself took to Twitter on Saturday to express her appreciation for Clarkson, praising her cover. And based on the audience’s reaction, Clarkson’s surprise was well-received. At the end, the singer even says, “I love that song. Seriously everybody gives Taylor Swift such a hard time, but I can tell you, she can write a hook. I’m just saying.”

So obviously both of these lovely ladies respect each other’s work, which is really refreshing. Now that Swift’s heard Clarkson’s cover, it would be pretty cool if the two could collaborate with one another for a Shake It Off duet, because that would be the best surprise of all.