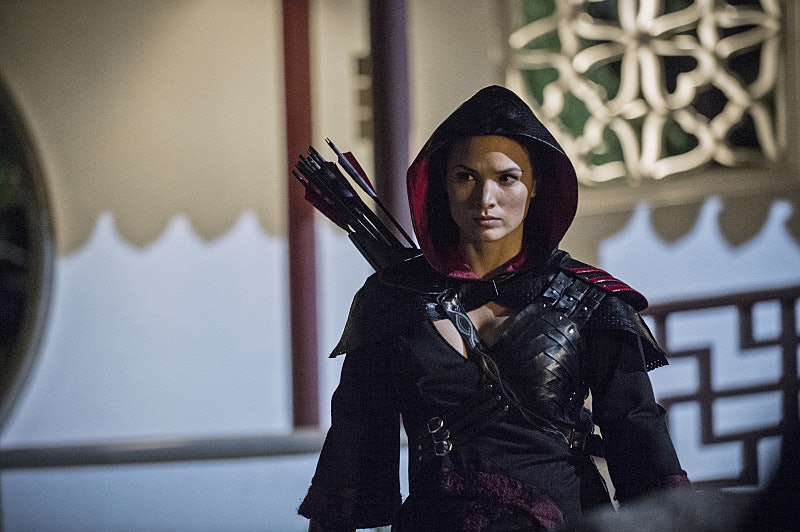 Making her grand return to Starling City, Nyssa al Ghul is joining Arrow Season 3. She first showed up as the end of last week's episode demanding by the blade of her arrow to see Sara. Since the two have a romantic past, the news of Sara's death should be devastating for Nyssa, and from the tone of her voice, as far as Nyssa's concerned, they still have a relationship. Brace yourself for Nyssa learning of Sara's death. As heartbreaking as it will be, Nyssa is a strong figure in DC's Green Arrow comics, so she'll take her girlfriend's death as bravely as she can. We can actually learn a lot about her strength from the comics.

Nyssa is a love child of Ra's al Ghul, who loved hearing stories about him growing up in Russia. When she was finally old enough, she set off to find her father and managed to track him to Africa. Ra's was so impressed with his daughter's skills that he invited her to join his villain clique as his right hand man — er, woman.

However, Nyssa wasn't too fond of Ra's' bloodthirsty ways and soon left her father's side. Ra's tried to win her back because he wanted her (and her future children) to take over as his heir. After she refuses to join up with him again, he completely disowns her. It'll be interesting to see where her relationship with dear old dad stands come this season on Arrow. Considering that Ra's is the big bad of the season, and Nyssa doesn't seem to know that Sara is dead when she shows up, how close is she with her father right now? It's hard not to assume that Ra's might have killed Sara, but would he really off his daughter's girlfriend? From what we currently know about Nyssa and Sara, they are both members of the League of Assassins. As far as we know, Nyssa doesn't have any hostility towards her dad, but that could easily change in Wednesdays episode.

In the comics (spoiler alert), Nyssa is actually the one to kill Ra's, not Batman (Ra's' greatest enemy) or Green Arrow. He lets Nyssa kill him, if only to prove a point that evil will always win. Following his death, Nyssa joins up with her sister, Talia al Ghul, to become the heads of the League of Assassins.

It will be interesting to see just how Nyssa merges into Team Arrow. She loves Sara, clearly, and so does Oliver and everyone else. They might have been on opposing sides at one point in time, but now they have the common goal of trying to find Sara's killer. Has Nyssa been sent to find Sara, or have the two gone AWOL from the League for other reasons? And more importantly, what kind of light will she shed on the mystery of Sara's death? If there's anyone who knows what she'd been up to for the past five months, it's probably Nyssa.