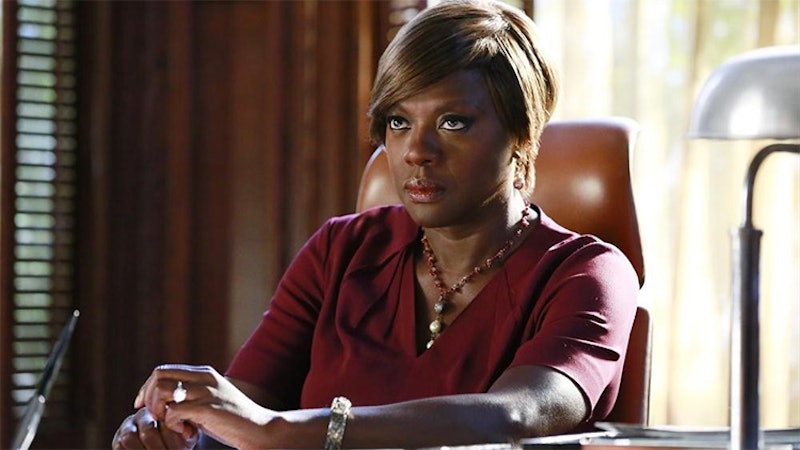 Depending on what the show du jour is if the time, there always seems to be a sudden influx of new students eager to pursue that career path. There currently seems to be a strong surge of young budding Olivia Popes out there, eager to become the new go-to it girl. Along with Olivia, we've now got Annalise Keating from Shonda Rhime's latest television outing, How To Get Away With Murder. As law student Michaela said in the premier, "I want to be her." Michaela, don't we all. But unlike Olivia, Annalise is not based off of any real person. But what about the show itself? Is How To Get Away With Murder based on a true story? Well, it's structured off of real law classrooms, so if you really want a high stress situation like the one Annalise is putting her students through, you won't have to look further than the nearest college campus.

Now, I will not claim to have any sort of law background or know the first thing about the law other than when I can take a right turn on red, but I know that it takes a whole lot of hard work and determination to make it to the courtroom. While students can pour over books and notes for hours on end, the only way they'll ever really learn how to practice law is to actually do it — with real case studies where the evidence is presented to them, and they have to figure out arguments, defenses and evidence. What we're seeing Annalise put her students through is completely common. Maybe they're not going to the extremes that her students seem to be taking, but law students really do sit around and discuss current and past cases.

Criminal law professor Paul Robinson teaches at the University of Pennsylvania Law School, which is supposedly the school HTGAWM's college is based off of. While he is real and Annalise is fictional, they both have the same approach to teaching. In an article in The Daily Pennsylvania, Penn State's newspaper, he explains that he will present his students with a case, and then they'll spend time debating it until a verdict is reached. He uses real cases so they can actually see the steps the legal teams took to win each case, or in some cases, why they lost their argument in the courtroom. This is the best hands on approach for the students to take, considering they'll be doing it eventually in the courtroom themselves.

So, as we see Wes and Laurel frantically running trying to come up with new evidence and a defense, somewhere on a college campus that really is happening. It might be a TV show, but unlike how Scandal is just so completely over the top sometimes, HTGAWM has a lot of truth to it.

With that in mind, it would be easy for HTGAWM to start utilizing "ripped from the headlines" cases, just like Law & Order, if only to continue to base the show in the real world of law. As long as students keep practicing law, and people keep doing stupid things, HTGAWM will never run out of new ground to cover.