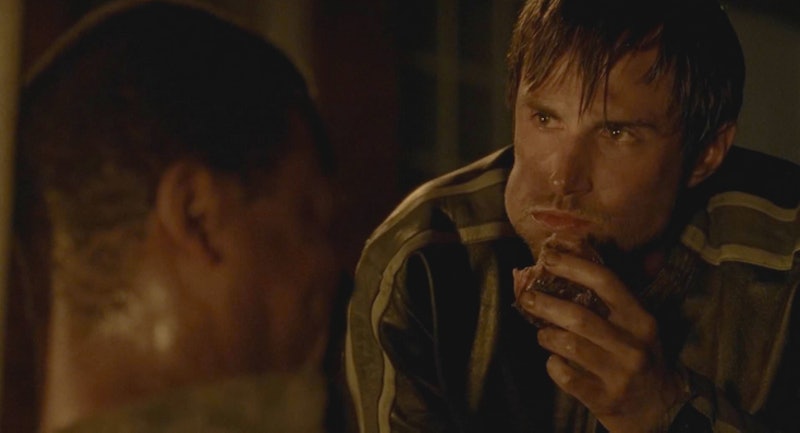 On “The Walking Dead,” the gang has found themselves up against their fair share of villainous groups, however, the cannibals at Terminus may have been the worst yet. Tonight's episode brought us Rick's brutal murder of Gareth — a much anticipated death. The slaughter of the Terminus crew was gruesome, considering they didn't want to waste any bullets, but what could be more gruesome than Gareth's taste for human flesh? While Rick has never been the most inviting and open to letting others in, after what happened with Terminus, it looks like any newcomers will be met with a lot more skepticism, not just by Rick, but by everyone. The "church massacre" has fortunately ended Gareth and the cannibalism that took place at Terminus, so what does Season 5 have in store? From next week's preview, we know that Beth is at a hospital. It appears that she is confused about her whereabouts, possibly meaning that these may not be the people who kidnapped her. If she was dropped by her original kidnappers and somehow ended up at the hospital, there will be even more questions to answer. Could the people at the hospital turn out to be good, or is that just too much to hope for at this point on this show? Daryl (and possibly Carol) made it back from their search for Beth, we can't be sure if they have figured out exactly where Beth is.

Although it isn't certain that the trip to Washington will still commence with the possibility of Beth's location being known, this episode showed us Abraham's urgency to get to D.C. in the heated debated he had with Rick. However, it didn't seem as though Eugene was too worried about how soon they left — does this lack of passion mean he really doesn't have the cure? The trip to D.C. may not be the pivotal moment for the show, nor the end of the zombie apocalypse, but possibly just a plot device to get the group to meet a new cast of characters.

More like this
The 'PLL: Original Sin' Creators Say A’s Identity Will Be “Very Clear” By The Season Finale
By Alyssa Lapid
Why 'Black Bird' Suspect Larry Hall Recanted His Jessica Roach Confession
By Brad Witter
Netflix Just Revealed When 'Never Have I Ever' Seasons 3 Will Premiere
By Gretchen Smail and Alyssa Lapid
‘The White Lotus’ Is Coming Back For Season 2 This Fall
By Bustle Editors
Get Even More From Bustle — Sign Up For The Newsletter