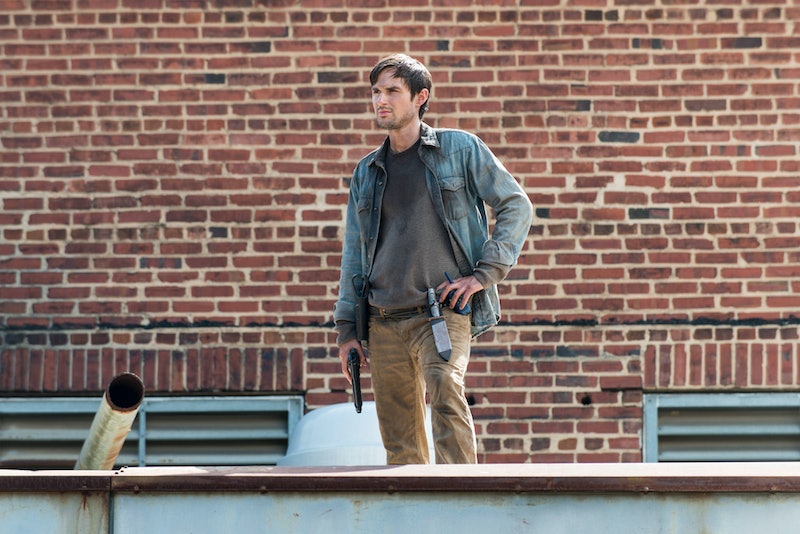 The Walking Dead had me so super pumped for the premiere on Sunday, Oct. 12 — mostly because of the tremendous Season 4 finale and the epic Walking Dead Season 5 Comic Con trailer — and the adrenaline rush of a show did not disappoint. The group has already escaped Terminus, but thanks to said trailer, we know that Terminus leader Gareth will return. Because it's The Walking Dead, we aren't getting much information from the showrunners or the actors on what's next for the people of Terminus. But Gareth actor Andrew J. West practically confirmed to Entertainment Weekly that Gareth would return:

Everything would seem to point to Gareth maybe making another appearance somewhere down the line. It certainly would appear that way, yes ... I mean I would hope Gareth isn’t done that quickly.

Gareth isn't from the comics, so we unfortunately can't turn to those for answers. He has been most compared to Chris, the leader of the Hunters in the comics, but showrunner Scott Gimple (kind of) shut down the Chris comparisons. Gimple told The Hollywood Reporter, "I'm not going to say people are right or wrong, but Gareth certainly isn't Chris from the comics unless Chris was lying to us about his past, which he may have." Uh, thanks for the clarification, I guess? But even without seeking the comics for answers, we saw that Rick shot Gareth — and that it wasn't fatal.

It's important to note though that the showrunners have repeatedly said that Gareth is not the Governor. As in, he's not the major "bad guy" for Season 5. (I'm thinking that the main villain — you know, besides the zombies — may be part of the group that Beth is with.) The Walking Dead creator Robert Kirkman told TV Guide back in March, "I would state emphatically that [Gareth] is definitely not the villain of Season 5. I don't want anyone to get the impression that this is a Rick vs. Governor face-off."

Gareth is coming against a very different Rick Grimes than the Governor did. So the outcome is going to be quite different. The only hint that I’ll really give you is that there’s a lot of ground covered in our first eight episodes, so I would say without a doubt that Gareth is far from the only threat, quite possibly far from the biggest threat, and there’s quite a bit on the horizon.

So, we know Gareth will have to return because of those scenes from the trailer and from West's and Kirkman's very ambiguous statements to EW, but we aren't getting any definitive answer on when. Because Kirkman specifically mentioned "eight episodes," maybe we won't see Gareth return until then. But the trailer makes it seem like Gareth is an important part of Season 5, so I'm not confident that he'll be gone that long.

When Gareth does return to the scene, it looks like Rick will have to play along with him for a bit as they head to Washington. But Gareth's story better end as Rick said it would — with Rick killing him with a machete.

And in closing: RICK GRIMES FOR PRESIDENT.