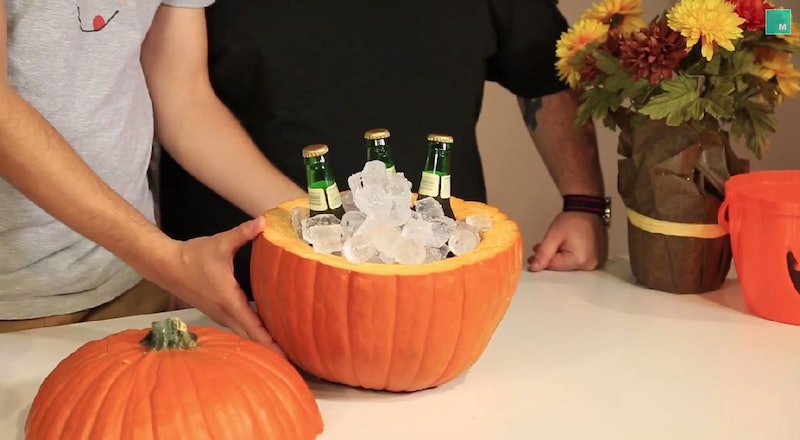 Halloween is only a few days away — but don’t freak out if you don’t have all your party ideas sorted out yet! Mashable's The Watercooler teamed up with Elie Ayrouth and Rudy Chaney of Foodbeast for this seasonally appropriate DIY video du jour, and it’s got all the Halloween food hacks you could possibly need, all in one handy place. The best part? They’re simple. Super, super simple. So simple, in fact, that they’re easily carried off either as garnishes for all the fabulous Halloween party munchies you already have planned… or just as last-minute décor ideas because your home still lacks the spookiness October requires. No shame if you’re in the second metaphorical boat here — it happens. But hey, at least we can fix it with the minimum amount of bother, right?

The video includes instructions for three different, mostly edible creations: Tangerine “pumpkins,” banana ghosts, and (of course) the aforementioned pumpkin beer cooler. Obviously the cooler can be used for things other than beer — soda, bottled water, and so on — but I recommend filling it with pumpkin ale. I mean… it’s a pumpkin. You can’t very well not fill it with something pumpkin-y, right?

Check out each of the three hacks below, and scroll down to watch the video in all its glory. You won’t regret it. I promise.

Peel a tangerine, then shove a little bit of celery into the top for a stalk. If you’re feeling adventurous and slightly less healthy, sub out the celery in favor of a piece of green Punch Straw.

Start by peeling a banana (and make sure you do it the right way!) and cutting it in half. Next, stand each half on their ends and jam some chocolate chips into them, pointy bits first, in the shape of a face. 2 spooky 4 me, you guys.

Turn a Pumpkin into a Beer Cooler

OK, so maybe a pumpkin beer cooler isn’t quite as epic as a pumpkin beer keg… but it’s still pretty neat. Oh, and as an added plus, your beer probably won’t go flat as quickly since you’re, y’know, keeping it in the bottles instead of pouring it out. Anyhoo, to make one, take your pumpkin, turn it on its side, and use one of your beer bottles to eyeball where you want the top of the cooler to be. Then slice open the pumpkin at that spot (using the bonus pumpkin carving hack demonstrated here), stick your beers in, and fill the rest of the pumpkin with ice. This one is so easy you don’t even need to clean out your pumpkin's guts after slicing it.