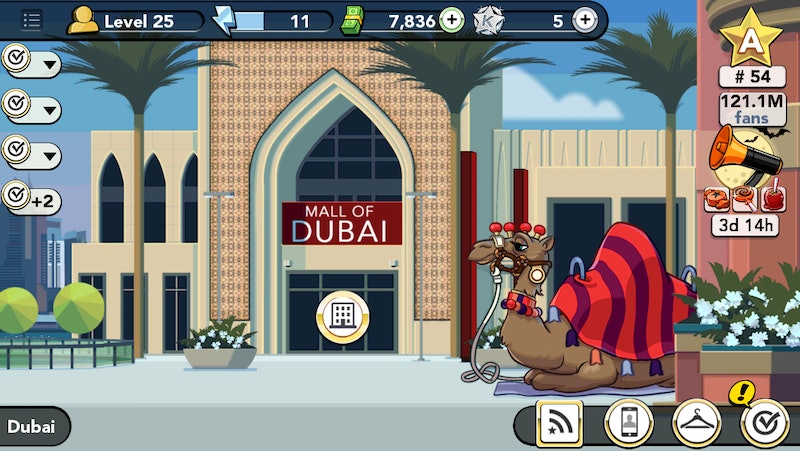 In the interest of keeping people invested in her game, Kim Kardashian has added Dubai to her iPhone game. The latest update for Kim Kardashian: Hollywood promises new quests in the glamorous city. With a new city comes new hiding spots, but fortunately it's not too hard to find energy in Kim Kardashian's game version of Dubai. You just have to poke around the buildings a little, all of which are based on real places Kardashian visited when she traveled to the United Arab Emirates city back in 2011.

The three buildings the new location offers are even ripped straight from her trip. You can go to The Mall of Dubai, where Kim held her perfume signing at the Sephora. There's also a restaurant with a giant fish tank modeled after the one she and her family visited at the Atlantis aquarium. Plus you can buy a luxurious suite in The Atlantean Hotel which is probably a reference to Atlantis The Palm where the Kardashians stayed at during their trip.

I love that Kim pulls from her own experiences for her game because it really does feel a little bit like the players get to live her life. Of course, Kim's life isn't full of searching bushes and trees for energy, but I'll take what I can get. So, if you haven't already, update your game and spend the 70 dollars to fly to Dubai for some dates, photo shoots, shopping, and more. Also, while you're there, rack up a couple extra lightning bolts because with each new city Kim adds, comes more chances to get energy.

TAP THE PLANT NEXT TO THE RESTAURANT

Greenery is a classic energy source in the game, so you can't go wrong by clicking on the large shrub in search for energy, money, or points.

PET THE CAMEL OUTSIDE THE MALL

Okay, technically you're just clicking the camel. But you know, pretend you're petting it. Give it a name if you want. It's just sitting there all day for your enjoyment, so you might as well be nice to it.

SAY HI TO THE LION CUB IN THE HOTEL SUITE

Pets are a great source of energy, and they are always willing to throw you a couple of bolts if you click on them. If you feel so inclined, you can purchase the room for $70,000 or 140 K stars and then you can buy the lion cub for another 50 K stars.

I didn't know the pet would be an endangered species when I signed away those K stars, which is unfortunate. I have a lot of problems with keeping a lion for a pet, even in the digital world. Plus, I happen to know that while owning big cat is a status symbol in the United Arab Emirates, it's also illegal. Oh, Kim. Always making me compromise my morals in the pursuit of points.

So there you have it, three new places to get lighting bolts. (Or two if your moral compass or lack of cash keeps you from buying the very expensive lion cub.) Happy energy hunting and enjoy digital Dubai!