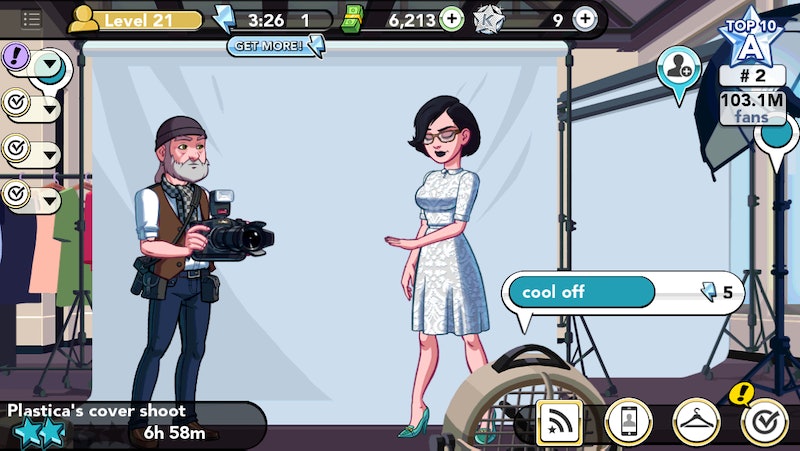 When playing Kim Kardashian: Hollywood, it is critical that one uses his or her lightning bolts wisely. As it has been iterated, reiterated, and re-reiterated, a blue zigzag pellet restores the avatar's energy, like an all-in-one food/water/sleep/caffeine supplement. An avatar must spend this energy to complete photo shoots, walk runways, mingle at club appearances, take singing lessons, shoot reality shows, go on dates, and so on. When tackling one of the aforementioned tasks, is there a correct way to spend the lightning bolts? Is there a strategy?

Here are some energy-saving and spending tips (Who am I, the utility company and/or Suze Orman?) to consider while playing KK:H:

Avoid Spreading Yourself Too Thin

Unless you're super into the idea of spending eight hours frantically hunting for lightning bolts around the KK:H world, DO NOT agree to do a music video and a fashion show simultaneously. For your avatar is but one avatar with one supply of lightning bolts. Splitting your bolts between two missions is a recipe for panic attack.

Get That Bonus Star

Ugh, I'll admit it: I never get that Bonus Star. What can I say? I'm not into buying an outfit just because the game told me to buy the outfit. *~I think for myself.~*

...Says the human who will do whatever Maria tells her to do.

HOWEVER, if you wear the right clothes, you'll start a photo shoot (or date) with a gold-plated Bonus Star (or Bonus Heart). That's one less star you have to worry about, my friend. Less bolts outta your pocket.

If you are game friends with IRL people, bring a pal to the photo shoot or fashion show. Choose "Pose Together," spend five bolts, and rake in a pile of stars.

Game money, not real money, doye. If you're in the middle of a club appearance, buy rounds, take shots, et cetera. A shot costs a lightning bolt and $50? DO THE SHOT.

Usually—but not always—this action will give you two stars. And come on, what's $50 in a game where money falls out of seagulls' butts?

When I choose a photo shoot task (i.e., "Cool Off," "Subtle Changes," et cetera), I count on the number of stars I receive being equal to the number of lightning bolts I spend. HOWEVER, this isn't always the case.

As I write this, I am in the middle of a photo shoot. Here are my field notes:

HM. So much for that 1:1 ratio. But what about when I pick a task that costs more?

Hubba hubba! This wasn't a fluke: Occasionally, the game will give me more stars than bolts when I spend a lot of stars. I don't know why it does it, I don't know if there's any rhyme or reason to it, but I am never mad at it.

This guide is good jumping off point for anyone who wants to pinpoint just how many stars each task will give you. However, the guide might be a few game updates behind (e.g., "Mysterious Look" is not on the list) and a few of its numbers don't match mine. Regardless, it's a fairly handy cheat sheet.

Your making the A list wasn't a fluke. You know what you're doing.

More like this
Kourtney Kardashian Got Married In A Heart-Stamped Mini Dress
By Allie Fasanella
Khloe Kardashian Just Proved That Sparkly Bikinis Are Very In Style
By Avery Matera
Oops! The 'Stranger Things' Monopoly Game Has Spoilers For Season 4
By Alyssa Lapid
'Conversation With Friends' Star Alison Oliver Is Dating A 'Normal People' Alum
By Rachel Mantock
Get Even More From Bustle — Sign Up For The Newsletter