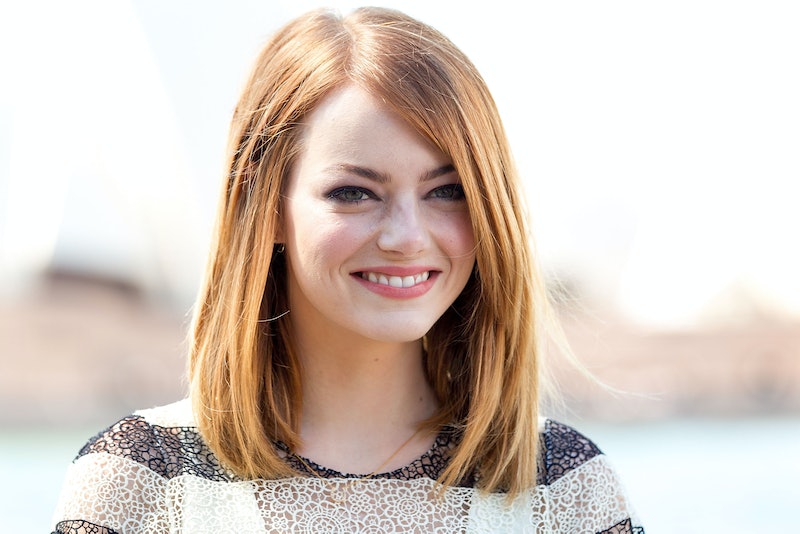 I feel like Jennifer Lawrence has kind of replaced Emma Stone in the modern culture of quirky, funny girls — or maybe this is just a phrase. I've gone from seeing Stone's love of the Spice Girls everywhere to seeing Lawrence everywhere, whether she's taking a stand against Internet hackers or just simply going outside with a middle finger umbrella over her head. However, when the Wall Street Journal interviewed Stone about her upcoming film Birdman and her Broadway debut, she had a lot more than just those two things to expound on. In fact, apparently Stone almost became a journalist, in a manner of speaking, but I can't say I blame her for losing her once great love for the Internet over the years.

Exactly how much did Stone love the Internet? Apparently, she used to have her own webzine like Reggie from Rocket Power. (Please tell me all of you get that reference.) "I had an e-zine that I would send to three people who would subscribe, who were probably all my mom under different screen names, before blogging was really a thing," she said. "...I had an advice column which featured questions from me and answers by me, which was great for working things out in a strangely therapeutic sense for a 10-year-old. I was really into fonts and layouts, so I worked hard on that. I sent it to my subscribers, who adored it, just adored it."

Aside from how adorable it is to imagine a little 10 year old Emily Stone emailing a colorful Microsoft Word document around to her mother, it's a bit shocking to hear how into the Internet she was as a child when she is now one of the rare celebrities who has no social media presence to speak of at all. No Facebook fan page, no Instagram, no Twitter, no Tumblr — just the real live Stone and whatever movies or interviews you get to see her in. Even then, there's usually a marked difference between what you want to know about her and what she wants you to know about her. After all, she and Andrew Garfield are notoriously tight-lipped about their relationship even though "Stonefield" is all many of us ever think about.

"Because I don’t really engage with it on a personal level, I don’t see comments personally directed at me or respond to anything in that way. I think maybe it’s easier to stay removed in some sense. I don’t feel at the mercy of whoever’s “@”-replying me, you know?" said Stone. " ...I think now there’s an overwhelming nature that’s sort of inherent to social media—all the tweets and the constant-ness of it is a little much for me." Which makes sense considering the fact that she seems to find it bizarre, invasive, and more than a little exhausting to be constantly followed around by paparazzi and their cameras when she's doing something as simple as walking outside.

Quite honestly, Stone has managed to acquire as much privacy as she can for herself considering she's such a huge star. By not talking about her relationship with Garfield, she maintains at least the illusion of control over her private life. When she and Garfield are followed to their favorite locations, they've twice been seen carrying signs advertising charities that they think deserve the attention instead because it "felt like a more effective way to bring attention in that direction even than Twitter maybe would, because it doesn’t feel like a faceless link that you’re sending out." And by avoiding an Internet presence entirely, she keeps the focus less on herself and more on her projects.

Somehow, despite the Internet boom destroying any confidence Stone had in it as a social tool and despite sites like Twitter probably being the reason Stone isn't still a "journalist", she managed to remain well-adjusted and keep her head above any negativity. Of course, I just think that's all the more reason for her mother to please, please, please publish copies of this alleged e-zine that 10 year old Stone used to send out to the world, but I know that's probably unlikely. The era of potential journalist Stone is over and done — unless she manages to land the role of Lois Lane in another Superman reboot down the line, I guess.

Image: girl-with-hair-like-this/Tumblr; We Heart It