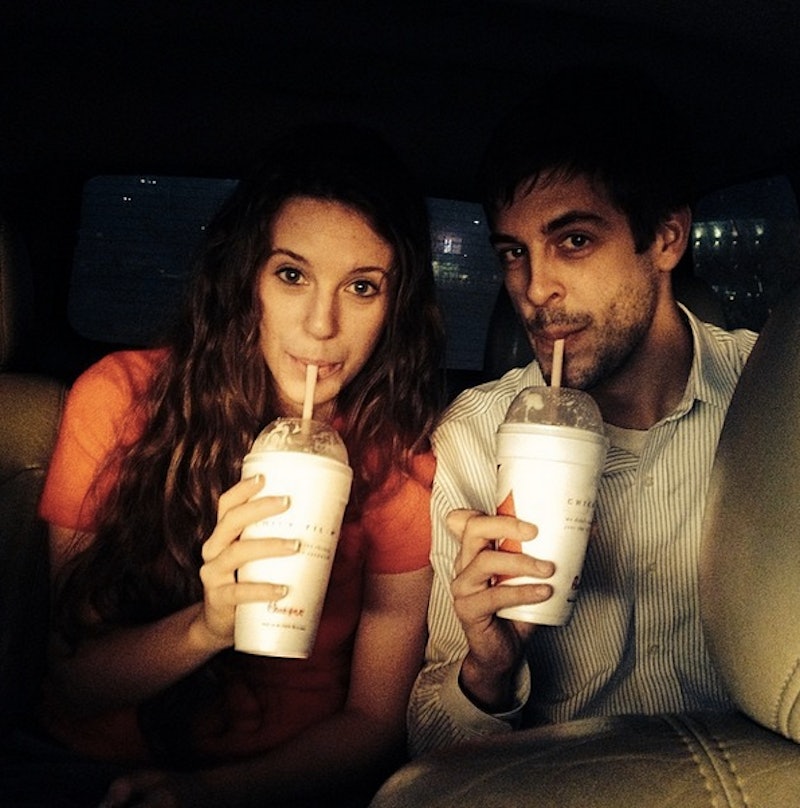 There may have been toasts at Jill Duggar and Derick Dillard's recent wedding, but they weren't raising glasses of champagne. Despite the storied history of religious alcohol consumption, the Duggars don't drink alcohol, because they don't think it's a compatible with their sect of Patriarchal Christianity. The family at the center of TLC's 19 Kids and Counting takes umbrage with pretty much anything that could be taken to extremes and lead to what they deem irresponsible or immoral behavior. Because of that, they have a very strict and somewhat isolated lifestyle that, by all accounts, seems to work for them.

The Duggars do seem to have plenty of fun without alcohol, but their version of fun is decidedly not stopping by a local bar — that could lead to dancing! (which is another Duggar no-no.) Instead, they spend a lot of time at church and studying the Bible, traveling to historical sites around the world, and spending time with their big network of extended family and friends.

Another reason why the Duggars don't drink? They don't like the taste of alcohol. Jessa and Jill once had small sips of alcohol at a political event, and they say it was so gross that they wanted to spit it out immediately. Here's where the Duggar family might write me off as a sinner, because that calls to mind my early adolescent experiences trying beer and swearing it was the grossest thing ever and I'd never have any again (a vow I've definitely broken now, but secretly still kind of think is true). And that seems like a totally fair assessment — plenty of people choose to abstain from drinking because they straight up think that it's gross.

If anything, this gives me a lot of extra respect for the Duggar girls. They actually took the time to try something outside their parents' purview and made their own personal decision about what they do and don't want to do. And Jill also says that while working in the local fire department, she's seen countless 18 year olds die from "ODing" on alcohol, which, while not stated correctly, does have a point. Binge drinking is way too prevalent, and can lead to drunk driving accidents and even death. Wanting to prevent their under-21 kids from drinking alcohol is one thing that the Duggars likely have in common with many other American parents. The family has simply chosen to abstain from alcohol regardless of age.

One of the sayings the Duggars abide by is "If you have any problem with drinking, don't go to the tavern." In this case, it seems they mean it literally.

More like this
TikTok's "Damp" Lifestyle Is All About Mindful Drinking
By Carolyn Steber
At 28, Prue Leith Was In A Secret Affair & Sharing Apple Pie With Stoned Neighbors
By Grace Wehniainen
Chris Hemsworth Is Taking Time Off From Acting Due To Alzheimer's Predisposition
By Jake Viswanath
This Company Will Send STI Tests Right To Your Door
By Lexi Inks
Get Even More From Bustle — Sign Up For The Newsletter